In recent posts, I've been examining some of the factors driving -- and not driving -- poverty in the U.S., focusing so far on growth, inequality, single parenthood, slack labor markets, and more. In this post, I wanted to say a bit about immigration.

Not unlike the analysis of single parents and poverty, too much analysis of this question basically argues that since immigrants, especially non-citizens (i.e., not naturalized) tend to be poorer than natives, if we take them out of the mix, we'd have less poverty. True: in 2012 (most recent data) the poverty rate for native-born persons was 14.3 percent while that of the foreign-born was 19.2 percent.

But that's not much of an insight. Since you could say the same thing about any group with below average incomes, it's pretty much saying we'd have less poverty if only we had fewer poor people. I suppose the anti-immigrant argument is that immigrants are not like other low-income, native-born groups because we don't have to accept them here. But while I agree that we and every other country should have the ability to control immigrant flows, no serious or realistic voices in this contentious debate are saying those flows should be zero. Immigrants have been and will always be part of the American demographic landscape, so a more germane analysis -- the more interesting and impactful question -- is not "does immigration lead to higher poverty in a given year" -- as noted, this is a simple "yes," based on their lower average incomes -- It's: What impact has immigration had on poverty over time and what might we expect in the future?

From the perspective of poverty, this is a question of a) the magnitude and economic status of immigrant flows, and b) "within group" trends. Net immigration -- inflows minus outflows -- goes up and down over time, so the pressure on poverty rates from this dynamic is not constant. Also, while immigrants are on average poorer then native-born persons, their impact on the trend in overall poverty is partially driven by their own poverty trends; if their higher poverty rates fall faster than natives, for example, that will put downward pressure on poverty trends.

Census data since 1993, plotted in the first figure below, show that as a share of the population, immigrant flows have been relatively flat in recent years, up a bit more than a percentage point over the last 10 years in the figure (from 11.7 percent in 2002 to 12.9 percent in 2012). Moreover, all of that increased share has come from naturalized immigrants, and -- this is important in getting at these dynamics -- that group's poverty rates are actually lower than natives. As shown in the second figure, naturalized citizens' poverty rates are consistently below those of the native-born. In 2012, 12.4 percent of naturalized immigrants were poor compared to 14.3 percent of native-born persons. 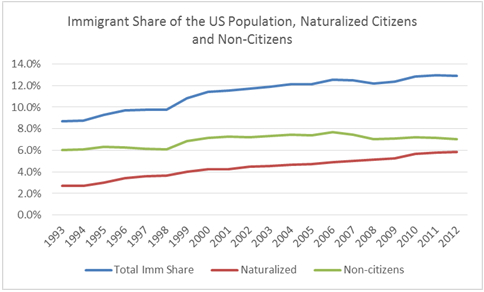 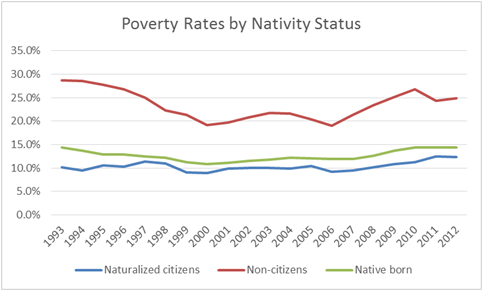 So, collecting facts, we know that at a point in time, adding immigrants to the mix raises poverty rates, but over time, trends are pushing in different directions: immigrant flows have both slowed and are increasingly weighted toward those with lower poverty rates.

A simple way to quantify the impact of this push and pull on poverty is to recognize that the overall poverty rate is weighted average of immigrant and native rates, weighted by their population shares. If we freeze those population weights in a base year, while allowing the poverty rates of both groups to evolve as they have over time, then we can compare the base-weighted simulated rate with the actual rate and assign the difference to the change in weights, i.e., the increase in immigrant shares of the population.

The results are in the table below. The actual poverty rate in 2012 was 15 percent. If we then freeze the population weights of natives and foreign-born persons at their 1993 levels, and just let their poverty rates change, the simulated rate in 2012 is 14.8 percent, just two-tenths below the actual rate (see "Base, 1993″ line in the table). So, by this simple (and admittedly incomplete) simulation, immigration increased poverty by two-tenths of a percentage point over 19 years.

The next two lines in the table tilt this re-weighting exercise toward trying to implicate non-citizens-since they have higher poverty rates-by holding only their weights constant in the base year (Non-cit, 1993 and 2000) and letting both poverty rates and population weights of the native-born and foreign-born naturalized citizens change each year as they did in actuality. The simulated rate using the 1993 base is 14.7 percent, suggesting non-citizens added three-tenths to the poverty trend over almost two decades. If I repeat this same he test using 2000 as the base weight, I end up with a simulated rate of 15 percent, suggesting no negative impact on the poverty trend from the net flow of non-citizens since then. 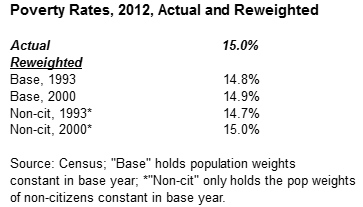 There are a number of reasons why this simple exercise is incomplete. First, it ignores interactions. For example, if increased immigrant shares are placing upward pressure on native poverty rates, say through labor market competition, this re-weighting will be biased toward finding no immigrant impact. Also, as I've stressed elsewhere, the official poverty rate is an inadequate metric for evaluating these questions since it doesn't include noncash benefits and tax credits.

While I doubt they'd move the results in a big way, these are significant omissions. While the labor economics literature shows little long-run impact of immigrant labor supply on the earnings of native-born workers, in this case, a few caveats are in order. First, that literature does show that immigrant competition has hurt the least skilled in the native-born workforce, and second, in periods of weak labor demand, the increased supply of labor from any source will dampen wage growth. In that regard, an attractive feature of recently proposed reform legislation builds in adjustments to the flow of low-skilled immigrants based on local labor market conditions.

Granting those caveats, and accepting the fact that, on average, immigrant households have higher poverty rates than natives households, immigration does not appear to be having much impact on poverty trends over time. For the last decade, the increase in the foreign-born share of the population has been driven by naturalized citizens with lower poverty rates, while non-citizen flows have been relatively flat.

The fact that immigration isn't placing much pressure on poverty rate trends suggests that if we want to reduce those trends, we're less likely to get there by trying to reduce immigration. A far better strategy would be to improve the earnings capacity -- the skills, the availability of decent paying jobs, the work supports -- available to all low-wage working families, regardless of their nativity.