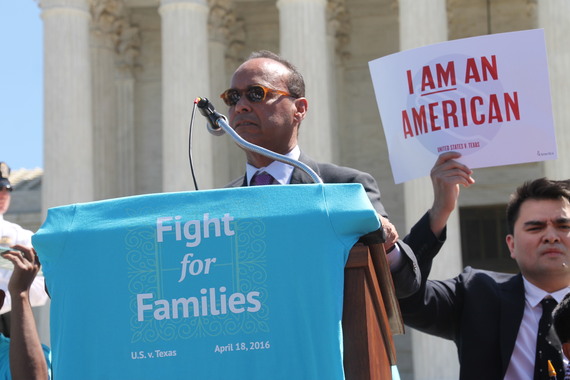 On Monday, I witnessed a part of our democracy that not many people get to see: oral arguments before the Supreme Court of the United States.

And you know what? It reminded me of the importance of women's equality.

Let me explain. The case I witnessed was United States v. Texas, where the state of Texas first sued the United States to stop President Obama's executive actions on immigration from taking effect.

If the United States wins, an injunction will be lifted and immigrants with deep roots in this country will be able to come forward and pay for a rigorous background check. If approved, they would be allowed to stay and work legally for a period of years and they would have to reapply and be re-evaluated periodically in order to stay in the U.S.

The reason I say that this case taught me a lesson about the importance of women's equality is because the three women on the Supreme Court really understand this case and what it is all about.

These justices asked tough, insightful questions, and I have to say, it didn't sound like they were buying the arguments of the Texas Attorney General's team, nor the lawyer hired by House Republicans to attack the President.

Ruth Bader Ginsberg, Elena Kagan and my fellow boricua -- of whom I am very proud -- Sonia Sotomayor, were all very forceful in poking holes in Texas and House Republicans' case, especially on the crucial point of whether the State of Texas has the right to sue the United States on this matter in the first place.

We will see what happens, but when I left the court I was more confident than ever that -- even with the court not at full strength -- this was going to be a lopsided victory for the United States and the president.

The crux of the argument that the State of Texas made is that they subsidize driver's licenses to such an extent that a driver's license in Texas from their point of view is a kind of welfare. Apparently, people in Texas do not pay full price for the cost of a license.

If the U.S. Department of Homeland Security vets people through a background check and categorizes these long-term residents as the lowest priority for deportation allowing them to stay, then the federal government, following its regular procedures that date back to the 1980s, will issue applicants a work permit for a temporary period of time so they can work legally and support themselves.

And if an individual now has a document issued by the federal government allowing them to stay and to work, they can usually apply for a driver's license.

And to the State of Texas, a driver's license is a form of state-subsidized welfare.

Note, the State of Texas did not argue that President Obama--or any president--lacks the power to grant temporary deferred action to groups of immigrants if each case is adjudicated separately.

That's right; the State of Texas has conceded what we already know: that the President is acting within the laws passed by Congress and the legal boundaries set by the Constitution, just as every President has done in modern times.

Instead Texas said that that the federal government is injuring Texas because Texas does not charge full price for driver's licenses.

So the key points of the oral argument went like this:

Um, hey Texas--and I am paraphrasing here--couldn't you charge more for the licenses?

Clearly, immigrants would pay more if that is what was needed to make Texas happy, and having more drivers on the books, buying insurance, and having accountability is much better for everyone than the current system where some immigrants cannot get licenses but drive anyway.

Texas said it had not really considered that option.

And, um, hey, Texas--paraphrasing again--couldn't you just refuse to issue the driver's licenses? Like Arizona did with DACA for DREAMers in 2012?

And Texas is all like, if we refused to issue driver's licenses to people with deferred action, we would get sued, and in that lawsuit, we might lose just as Arizona did.

Which begs the question, why were we here in the first place?

And then it became clear to everyone in the courtroom why Texas, Republican Governors, and Republican Congressmen had chosen this path.

They were making a political statement. They felt it was important to call the president lawless and a dictator and they used the Texas driver's licenses as their excuse.

And if you take a deeper look, Texas is really saying that people can stay and the President has the power to keep families together, but they just can't drive or work if Texas has its way.

Moms and dads would have to work in the underground economy, drive without licenses or insurance, not be fully covered by wage and safety laws, and always be subject to exploitation. That is the world Republicans in Texas envision.

Well, as Doctor King taught us, the arc of the moral universe is long but it bends towards justice, and so it often is when it comes to the American courts.

Monday, our highest court, led by its women, but likely to include another two or three justices in the majority, took a step towards justice. Now we wait until probably June to hear the outcome. And maybe, just maybe, the Senate will someday do its job and allow the ninth and final Justice to sit on the court.