When Maximino Hoz presented his case asking for relief from deportation, he submitted letters from his children’s teachers, therapists and friends saying his family would suffer extreme hardship if he were removed from the country.

But his most sympathetic advocate may be his 12-year-old, U.S.-born son.

As President Barack Obama and members of Congress on both sides of the aisle pledge to take on comprehensive immigration reform following the election, the heart-wrenching, one-paragraph letter from Anthony Hoz highlights the pain of family separation that has become a common by-product of the current U.S. immigration system. The letter, begging judge Rex Ford not to deport his father, is just one compelling case among the nearly 400,000 people deported every year. 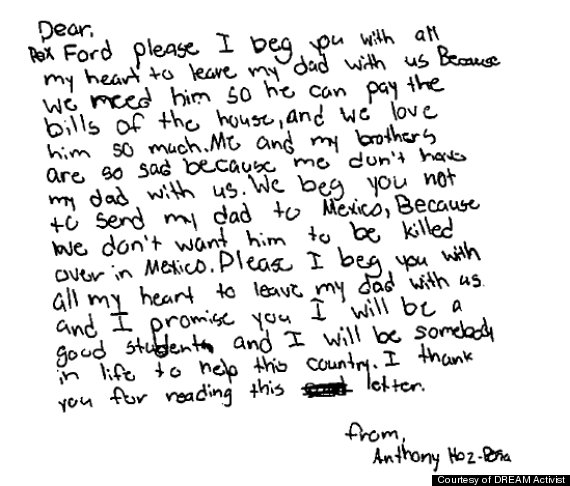 The Hoz family arrived from Mexico in 1993, according to Reyna, who says immigration officers detained her husband Maximino 11 months ago and sent him to Broward Detention Center in Florida. Authorities at "Broward Transitional Center," U.S. Immigration and Customs Enforcement's name for the facility, did not return a phone message asking for comment.

“He’s a hardworking man,” Reyna said of her husband, who is a contractor.

Maximino's case file contains letters from concerned teachers, friends, and colleagues, all pleading for leniency in Hoz’s deportation case. The Huffington Post obtained the file from a Dream Act activist, who obtained the file from Reyna. Hoz is a hard worker who never missed a day on the job, one employer wrote in the file. The director of a community organization said Hoz contributed hundreds of hours volunteering at a food distribution center in his free time.

Since their father’s detention, Hoz’s five children have struggled with depression, according to a teacher and a therapist. The youngest has seen his school performance suffer. Two have told their mother they contemplate suicide, according to the file.

But it won’t be an easy case for the Hoz family to win.

Rex Ford, the judge to whom his son addressed the letter, has a reputation for tough rulings. He once ordered a Chinese woman deported for answering questions before the court interpreter had translated them. “The respondent, after proper notice, has failed to appear,” Ford said, though the woman, Xiu Ping Jiang, was standing before him, according to a transcript reported by The New York Times.

Jiang had no criminal record and was seeking asylum in the United States after being forcibly sterilized in China at age 20, according to the New York Times.

Hoz also has a criminal record, including two DUIs and driving without a license, that will make his case hard to win, according to Aliseris.

“Has he done anything that bad? I don’t think so, but that’s my opinion,” Aliseris said. “It’s sad. I mean it’s the way the immigration laws are written. These laws are written really tough.”

This story has been updated to add context.

Deportations Around The World