The Statue of Liberty, "Mother of Exiles," presents an ideal face of U.S. immigration.

Long before 1886, when she opened for business, the world began supplying America a steady stream of new arrivals. It's never stopped. 80 million people, a quarter of the U.S. population, are first or second generation Americans.

But American immigration has other, more unattractive faces. Today, for instance, we are familiar with presidential candidates promoting borderland walls and a Muslim-Free America.

" Give me your tired, your poor, your huddled masses yearning to breathe free."

There's nothing new about this, except the names of the groups they want to blackball. Racist, Jingoist diatribes have abounded in American media all the way back to the days of the Founding Fathers, especially in election years.

We're hearing a lot of this now. I know I am. It goes with my job. Every week in the research room at MOST (Muslims On Screen and Television), my colleagues and I dig through a small mountain of news and human-interest articles in search of stories about Muslims that break the mold. We scour online journalism, TV, radio, and print.

We post the best on a searchable archive called The Story Bank and maintain it online at www.mostresource.org for TV-and-screen writers, producers, reporters, researchers, and others with special interests.

It's an interesting job in a complicated time. Lately, a lot of these items deal with immigration. It's got me thinking.

Some groups have suffered worse treatment in America than others--the Chinese more than the Italians, the Irish more than the Germans, but no new group has gone unscathed. America's initiation rites tend to be brutal.

Catholics became a prime target in mainly Protestant America with the arrival of the Germans and Irish in the 1840s. In 1849, the Know-Nothing Party formed to keep Catholics from political office and associate them with conspiracies. Jews, though never persecuted as in Europe, were often socially isolated and only fully accepted into American society after the horrors of WWII.

The same war marked a low-point in phobic patriotism, when 120,000 people of Japanese descent, 60% of them U.S. citizens, were forcibly relocated or incarcerated out West.

These and others groups in their time were slimed with stereotypes, denied employment, excluded from neighborhoods, run out of town, hung from trees, badgered by law enforcement and punished in the courts, local and Federal.

Yet who, today, thinks of any of these groups of American citizens as foreigners or "heretics" or a threat to peace and stability?

In recent years, globalization, terrorism, shrinking job markets, and the Great Recession have challenged immigration policies everywhere. Beleaguered nations and failed states, countries overrun by crime or war, have released desperate streams of luckless refugees --68 million and counting--into a world ill-equipped to absorb them. Here's a glance at the big ones flowing from the Middle East.

Iraq
The Iraqi refugee diaspora is one of the largest in modern times. Thirteen years after the 2002 American-led invasion, more than a million Iraqis can't return due to ongoing violence. Four million are internally displaced persons live inside Iraq. In addition, tens of thousands live under imminent threat, having once been employed by the U.S. Military.

Until 2008, the number of Iraqis resettled in America was miniscule. But that is changing. From 2010 to 2014, Michigan saw an increase of 38% in refugees, mostly from Iraq. Detroit is now their top destination, absorbing tens of thousands in recent years.

Afghanistan
Nearly four million Afghans reside uneasily in Iran and Pakistan. Another 700,000 are internally displaced. In 2015, 200,000 Afghans crossed the Mediterranean into Europe, the second largest migrant stream after Syrians. But while Syrians are being fast-tracked, Afghans have received a different welcome. Though fleeing violence and chronic social chaos, they are more often defined as "economic migrants" who should stay home.

Afghans entering the U.S. are on the increase. In 2013, new laws tripled visas for Afghans to 5,000 a year and extended the application process beyond U.S. government employees. The numbers are still startling small. And lately, sparked by a resurgent Taliban, Afghan flight has increased and grown more dangerous. 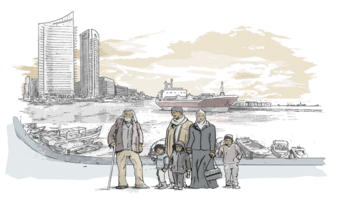 And now we have Syria.
News sources refer to the arrival of Syrians on Europe's borders as "the Syrian refugee crisis," but the actual crisis is in the Middle East. The L.A. Times has provided a good look at what countries have been doing something about that, and which are still not.

The U.N. has registered over 4.5 million Syrian refugees, tented in camps in Turkey (2.5 million) Jordan (1 million), Lebanon (600,000), and Iraq (250,000). The strain on fragile infrastructure including water, education, and healthcare is enormous. Only Turkey has an economy remotely capable of sustaining such influxes. Now, these human reservoirs have overflowed.

It started in early 2015, when overloaded ferries, rubber Zodiacs, and dinghies began pitching refugees onto Greek beaches. By now, Greece has served as a European land bridge for a million people. Over half are Syrian. Many are families, middle class, out of luck, once employed, well educated. Italy is another interim destination, receiving to date 150,000 asylum seekers and refugees, most on their way to wealthier countries. The route leads through the Balkans and hostile Hungary into Western Europe. 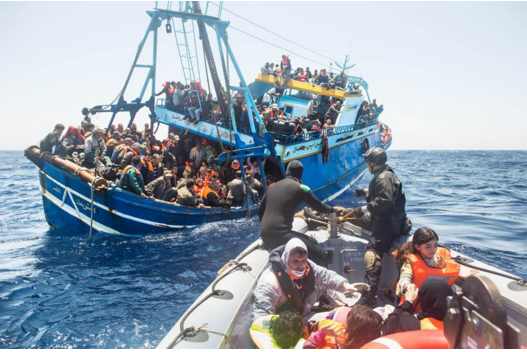 Germany, Europe's strongest economy, has signed on for a million asylum seekers this year. EU quotas have assigned 25,000 refugees to France. Sweden has taken in the most people relative to its population of 9.5 million. In 2014 alone it admitted 80,000 refugees, more than a third from Syria. In 2015, the number doubled to 160,000 asylum seekers. As the flow peaked, 10,000 refugees were crossing the Swedish border daily.

The admission of refugees in Europe has dropped sharply since December 2015. The reasons are many, including economics, lack of infrastructure, culture clash and backlash. First and foremost, the numbers are just staggering. The U.N. Refugee Agency has a small map loaded with up-to-date data that can be found here.

Stories abound. BBC News offers a vivid collection of voices, drawings, and photographs that only a stone could not be moved by. They are detailed, intimate, fascinating, and not to be missed if you take an interest in personal narrative.

Across the Atlantic, Canada began to process an initial projected stream of 25,000 Syrians in late December. And in the U.S, President Obama announced that the U.S. would take 10,000 Syrian refugees in 2016. The first are already arriving. A recent New York Times article tracks the progress of three. Through its Syria Humanitarian Response program, the U.S. has contributed $1 billion a year since 2012, underwriting food and refugee operations in Lebanon and Jordan.

None of these efforts is without huge challenges, but they are underway.

The U.S. and Immigration:

The U.S. has entered an election year: OH, boy! Season of Political Footballs and high voltage Third Rails, blood-chilling Opportunism and rhetorical sticks of dynamite designed to scare the daylights out of voters and roil the muddy waters for Cheap Votes.

What a difference Election Season makes! Maybe especially the 2016 Presidential Election, which is shaping up to be a real bundle of surprises, especially on the Immigration Front.

In December, the Trump campaign joined the issue of Immigration to fears of terrorism and the Syrian refugee crisis, following the San Bernardino terrorist attack, in which a radicalized couple shot up a workplace banquet, killing 14 and injuring 22 more.

Scenting a winning Trifecta of outrage, fear, and militant xenophobia at home, the Republican front-runner shocked some and thrilled others with his readiness, if elected, to ban all Muslims (roughly a quarter of the world) from entering the States.

The media did not take this lightly. CNN weighed in at once with research on Muslim Americans' accomplishments. And the British Guardian took the opportunity to provide a similar primer. The Washington Post ran a report on American Muslim Congressman Keith Ellison. The following week, Glenn Greenwald, of WikiLeaks fame, compiled a stark list of Islamophobic attacks in the wake of San Bernardino and Trump's announcement. Presenting another dark view, David Horsey in the L.A. Times wondered if European nations might more likely respond to their rising tide of "poor, darker-skinned predominantly Muslim" immigrants with a Donald Trump of their own.

Electioneering aside, no outside government seems capable of offering full relief. The heart of the problem is regional, and any solution will finally need to focus on the Middle East. Meanwhile, don't discount the work of independent activists.

From the heaps of Immigration articles posted on our Story Bank, one in the New York Times Sunday Review caught my attention. In it, Anand Giridharadas provides a paradoxical analysis, citing statistics indicating that immigrants who acquire American citizenship will on average earn more, study longer, marry more frequently, and divorce and suffer unemployment less than their homegrown fellow citizens.

Giridharadas is author of "The True American," the story of a Muslim convenience store operator shot but not killed in a revenge attack after 9/11, who years later testified in defense of his assailant on death row.

And that's the news for now, from MOST.