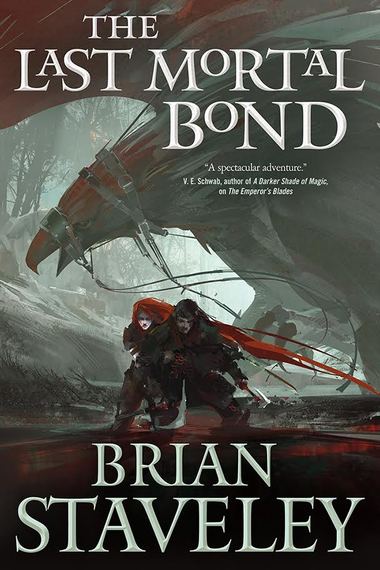 Epic fantasist Brian Staveley thundered onto the scene in 2013 with his debut, The Emperor's Blades, first in the Chronicle of the Unhewn Throne: a tale of trained elite assassins, political intrigue, and treacherous magic. Just a few years later Staveley is an acknowledged major force in epic fantasy. His conclusion to the trilogy, The Last Mortal Bond, which releases this month, promises to deliver a gut-punch ending with shocking twists. Don't miss this series if you love dark, complex, mind-bending epic fantasy.

In this interview we touched on various topics such as fantasy tropes, violence, and surprises in the writing process. He also has a wizard cut out someone's eyeball in an especially teachable moment--that's Brian.

First of all, congratulations on the completion of this highly acclaimed trilogy! How did it feel to write the final sentence of The Last Mortal Bond?

Honestly, I always wish that writing the final sentence of a book felt better, more like stacking the last of the firewood, or running the final mile of a long race. When I finish a race, happy or frustrated, there's really nothing to be done but go find the beer tent. Writing isn't like that. There's no beer tent with a book, just three cups of coffee before you head back out onto the course to run the whole damn thing over again.

It's been a long journey for you and these characters. Did anything come up in the course of writing that surprised you?

One thing that cracks me up about the publishing world is that people keep asking me for synopses, despite the fact that my synopses bear no more relationship to the final work they are supposed to represent than does Anaximander's map of the world to the actual globe that we inhabit. Anaximander manages the most basic, obvious points--"Let's see... Got Greece. Got the Nile..."--and then he more or less punts for the rest of it: "Gonna go ahead and call all this stuff Asia... slap an ocean around it... We're good!"

That's more or less my method, too. It might seem reasonable to expect an author to have more comprehensive knowledge of his own novel than a sixth century Greek cartographer might about the courses of Chinese rivers, but I find that in writing, as in exploration, no amount of preliminary abstract theorizing can get you closer to the truth. There will be cataracts and streams you never dreamed, ravages of glaciation that defy all reasonable expectation. The only way to know a world, even one of your own creation, maybe especially one of your own creation, is to lace up your boots and go look.

You spent years teaching world history and comparative religion, and wrote the first draft of The Emperor's Blades while living in Asia. Was there a conscious decision on your part to move away from the more common Europe-inspired fantasy milieu? How has this decision played out in the process of writing--are there direct parallels to history?

I grew up in love with medieval Europe. Not the real medieval Europe, mind you. Not the medieval Europe comprised of such tedious events as the lay investiture controversy or the development of Carolingian miniscule. Medieval Europe, in my childhood mind, meant castles and swords and heraldry, and it was glorious. Only much later did I realize that Europe between, say, 476 and 1099 was more or less a grubby afterthought of a peninsula on the ass end of Asia. Europe would have its day, of course, but in the latter half of the first millennium the really exciting business was mostly taking place to the east. By the time I decided to write fantasy, it seemed only natural to look more to the Tang dynasty than the Merovingian. That isn't to say that the books are set in China--historical fiction, even historical fiction posing as fantasy, requires a degree of confidence or madness well beyond me.

I think many writers of epic fantasy come into it out of love, but also with a desire to break things--standards, tropes, ways of looking at the world that are typical in the genre. Were there any aspects of epic fantasy that you looked at and wanted to break as you created your own story and world?

I'm not so interested in breakage, despite the fact that the word seems to have acquired an almost universally positive valence. It seems, in America these days, that the language of destruction has become the sine qua non of excellence and achievement: it's good to shatter expectations, destroy convention, break records, just generally crush it.

Within the fantasy genre, however, breakage is actually pretty easy. See that nice wizard over there? He has a pointy hat and a white beard. He mutters querulously to himself. He's forgetful. He likes to read. He feeds nuts to an owl that perches on his shoulder. Now, let's watch as he pries the eyeball from the skull of an innocent child while that child's parents, whom our wizard has nailed (non-fatally) to a wall, watch in horror. Trope: broken.

And you can do that kind of thing all day long, without really batting an eye. I find it much more difficult to build than to break, and even when I'm trying to build something new, which is often, I'm usually looking for what I can salvage or repurpose from the old tradition.

Having had the opportunity to chat with you in person, I can attest that you come across as an affable, cheerful guy. Yet your work is dark, brutal, and extremely violent. Without psychoanalyzing you too much, I'd love to know what's going on there!

Oh dear; and here I just devoted a paragraph to the child-torturing wizard.

Honestly, I'm always a little surprised when people describe my books as dark or violent. I tend to dislike books and stories that are unrelentingly hopeless or humorless, and that's certainly not the kind of novel I'm trying to write. There's a scene, in The Last Mortal Bond, in which a main character is forced to observe a brutal religious ritual. After, when asked what he thought of the spectacle, he replies, "I thought it was boring." Unrelieved suffering, like unrelieved comfort, becomes dull astonishingly quickly, to an audience, at least, if not to the person doing the actual suffering.

The Unhewn Throne trilogy certainly has its share of war and war's ravages, people and polities torn asunder by forces beyond their control, but my favorite parts of the story, the parts that make it all matter, are, at least to my mind, filled with hope. There's a reason I describe The Last Mortal Bond as a love story in the acknowledgments.

What can you reveal about your next project?

And last, on a subject near my heart, and also yours--will we be seeing more poetry in your next books, since you are also a poet?

The Predator/Twelfth Night book is obsessed with music, including vocal music, and I've really enjoyed writing some of the song lyrics. Every so often I'm tempted to write the score as well, but then I remember--when I sit down to plink away at my banjo--that I have absolutely no idea how to write music. 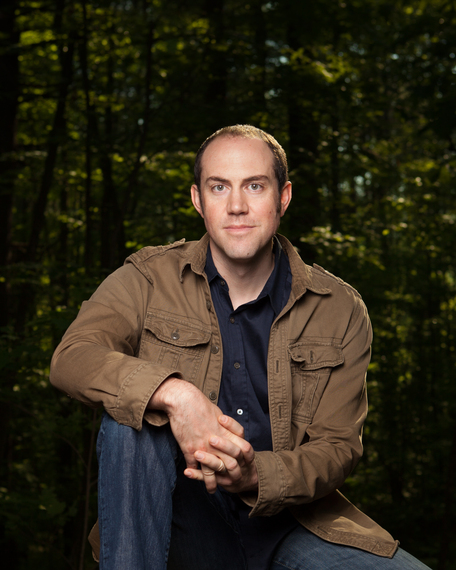 After teaching literature, philosophy, history, and religion for more than a decade, Brian began writing epic fantasy. His first book, The Emperor's Blades, the start of his series, Chronicle of the Unhewn Throne, won the David Gemmell Morningstar Award, the Reddit Stabby for best debut, and scored semi-finalist spots in the Goodreads Choice Awards in two categories: epic fantasy and debut. The first seven chapters can be had for free here: http://www.tor.com/blogs/2013/11/read-the-emperors-blades-by-brian-staveley. The second book in the trilogy, The Providence of Fire, was also a Goodreads Choice semi-finalist. The concluding volume of the trilogy, The Last Mortal Bond, is available now.

Brian lives on a steep dirt road in the mountains of southern Vermont, where he divides his time between fathering, writing, husbanding, splitting wood, skiing, and adventuring, not necessarily in that order. He can be found on twitter at @brianstaveley, facebook as brianstaveley, and Google+ as Brian Staveley. His blog, On the Writing of Epic Fantasy, can be found at: bstaveley.wordpress.com.