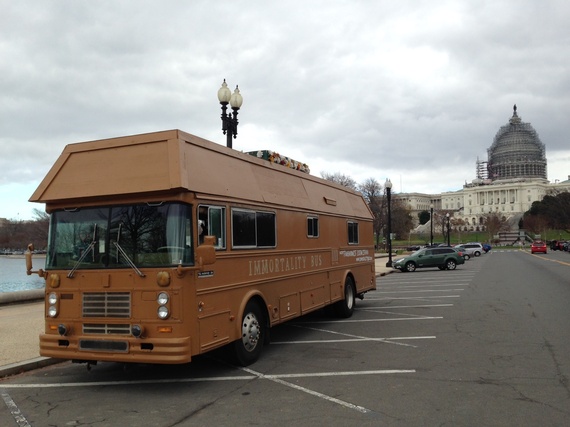 After months of traveling across the country on a national bus tour, the coffin-shaped Immortality Bus drove into Washington DC and successfully delivered a newly created Transhumanist Bill of Rights to the US Capitol. The delivery of the futurist-themed bill--which aims to push into law cyborg and anti-aging civil rights--ends a national tour for the bus that began its journey in San Francisco on September 5th, 2015.

Crowdfunded on Indiegogo, the provocative Immortality Bus has caught the attention of both America and the world. Highlighted in major media ranging from a 10,000+ word feature in The Verge to a CraveCast podcast on CNET to a leading front page story on BBC.com, the Immortality Bus has been making waves with its controversial message: Science and technology can overcome human death--and will likely do so in the next 25 years. 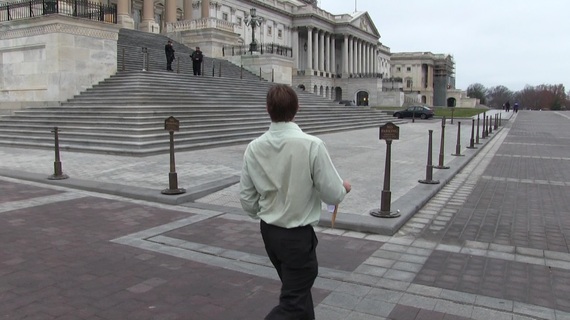 Much of my US Presidential campaign for the Transhumanist Party--which used the bus as a vehicle to spread a techno-optimistic message--also reiterates this same immortality agenda. I believe if the US Government would dedicate $1 trillion dollars to life extension, longevity, and anti-aging industries, we could likely soon conquer death as a species. For some a trillion dollars may seem like a lot of money, but consider that the US government will spend approximately $6 trillion dollars all together on the Iraq War. Surely, overcoming death through modern medicine and science for all Americans seems a much better idea that fighting far-off wars in places most of us will never visit.

With this in mind, the Transhumanist Bill of Rights seeks to declare that all Americans (and people of all nationalities, as well) in the 21st Century deserve a "universal right" to live indefinitely and eliminate involuntary suffering through science and technology. Those ideas are conveyed in Articles 1, 2 and 6 of the one-page bill. Specifically, Article 6 establishes that we should seek to treat "aging as a disease," something a number of leading gerontologists, like Dr. Aubrey de Grey--Chief Scientist of SENS Research Foundation and the Transhumanist Party Anti-aging advisor--also endorses. 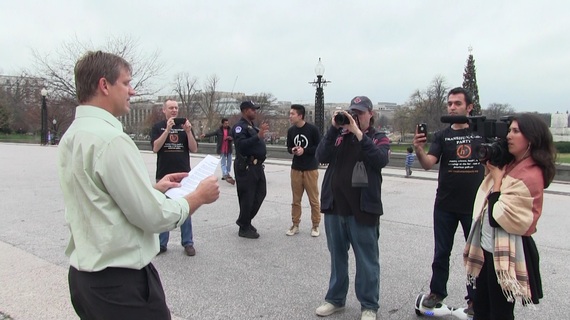 The Transhumanist Bill of Rights--which I read out loud at the steps of the US Capitol, then posted it to the building, and then also hand delivered it to Senator Barbara Boxer's office (my California representative)--covers a number of essential futurist civil rights topics. The bill mandates we protect our species and the planet from existential risk (including environmental destruction, rogue artificial intelligence, and the 25,000 nuclear weapons that currently exist). The bill also calls for renewed commitment to space travel, as well as a government's promise to not put cultural, ethnic, or religious policies before the general health and longevity of its citizens.

Finally, the bill emphasizes the right to morphological freedom: the right to do with one's body whatever one wants so long as it doesn't hurt another person. This is especially important in the gene editing / designer baby age, which has recently been the cause of much discussion in the scientific community. Unfortunately, some of this talk has been disturbingly anti-progress with calls for a moratorium on such technology. I strongly disagree with scientific moratoriums--unless they are directly and obviously harming people today--which is one reason why we need a bill of rights to protect the interests of human health, evolution, and progress. 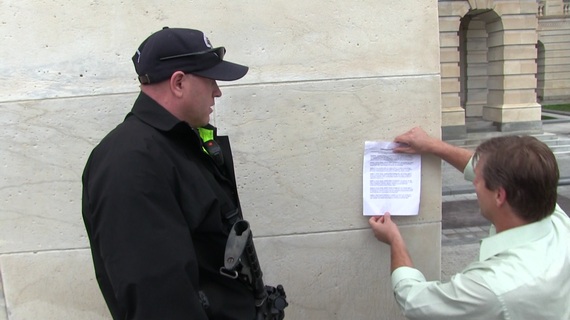 Posting the newly created Transhumanist Bill of Rights to the US Capitol on December 14, 2015 -- Photo by Roen Horn

Below is a copy of the Transhumanist Bill of Rights. While the bill has been carefully considered by myself and other transhumanists, and we hope it will be incorporated someway into law by the United States of America and other governments, the bill is not static and may evolve further as science and technologies evolve. Futurists generally believe no bill of rights, declaration, or constitution should ever remain permanent and unbendable in the transhumanist age--an age where science and technology are dramatically and rapidly changing our lives and our experience of the universe.

Preamble: Whereas science and technology are now radically changing human beings and may also create future forms of advanced sapient and sentient life, transhumanists establish this TRANSHUMANIST BILL OF RIGHTS to help guide and enact sensible policies in the pursuit of life, liberty, security of person, and happiness.

Article 2. Under penalty of law, no cultural, ethnic, or religious perspectives influencing government policy can impede life extension science, the health of the public, or the possible maximum amount of life hours citizens possess.

Article 3. Human beings, sentient artificial intelligences, cyborgs, and other advanced sapient life forms agree to uphold morphological freedom--the right to do with one's physical attributes or intelligence (dead, alive, conscious, or unconscious) whatever one wants so long as it doesn't hurt anyone else.

Article 5. All nations and their governments will take all reasonable measures to embrace and fund space travel, not only for the spirit of adventure and to gain knowledge by exploring the universe, but as an ultimate safeguard to its citizens and transhumanity should planet Earth become uninhabitable or be destroyed.

Article 6. Involuntary aging shall be classified as a disease. All nations and their governments will actively seek to dramatically extend the lives and improve the health of its citizens by offering them scientific and medical technologies to overcome involuntary aging.