When you live with someone, it turns out that it can be way more intimate than just sharing space -- you can also end up having similar immune systems.

A new study, published in the journal Nature Immunology last week, suggests that the cellular composition of our immune systems is partly shaped by who we live with as well as our age.

The research marks the first time that the immune systems of two unrelated individuals in a close relationship have been closely analyzed and compared, said Dr. Adrian Liston, a researcher at the Flanders Institute for Biotechnology in Belgium and a co-author of the study.

"We already knew that environmental factors can impact the immune system, so in that regard it should not be a surprise that people with similar environments have similar immune systems," Liston told The Huffington Post. "But what was really surprising was the strength of the effect."

For the study, the researchers monitored and analyzed the immune systems of about 670 people, ranging in age from 2 to 86, over a three-year period.

The researchers collected blood samples from each person and took a close look at the immune cells in each sample, New Scientist reported.

After assessing each person's age, gender and weight, the researchers discovered that the individuals who lived together had surprisingly similar cellular compositions in their immune systems.

"We know multiple environmental factors can change the immune system – diet, alcohol, smoking, exercise, pollution, stress – and lot of these factors will be shared in couples," Liston said.

Furthermore, couples who lived together and shared a child had 50 percent more similar immune systems than seen in the wider population.

"The effect of cohabitation with a child was a more powerful influence on the immune system than 40 years of aging!" Liston said.

Liston said another factor that had a strong impact on the similarity of immune systems is the bacteria living in our guts.

"We don’t live in a sterile environment, so just living together means that we will have similar bacteria in our guts, again pushing our immune systems into a similar status," he said. "Then if you are in a relationship, things will be even more similar. 80 million bacteria are transferred in a single kiss."

What, then, would happen if a couple living together breaks up? Liston said that the scenario wasn't explored in the new study, but he would assume that each partner's immune systems would start to drift apart into new configurations.

The researchers concluded that we each have unique immune systems that can be influenced by age and our environment.

"We all have a stable immune landscape which is robustly maintained," Dr. Michelle Linterman, a researcher at the Babraham Institute in England and a co-author of the study, said in a statement. "What is different between individuals is what our individual immune systems look like. ... Our study has shown that age is a major influence on what our immune landscapes look like, which is probably one of the reasons why there is a declining response to vaccination and reduced resistance to infection in older persons."

So, according to the researchers, something as simple as changing our immediate environments can cause profound changes in our immune systems, which impact our risk of developing auto-immune diseases, allergies, cancers, and many other health concerns.

"The bad news is that 25 percent of the variation [in our immune systems] is caused by our genetics, so there is not much to do there. The good news is that 75 percent is not genetic," Liston said. "If we can predict exactly how each environmental factor alters the immune system, we might end up being able to reduce the risk of inflammatory diseases by approaches as simple as altering diet or sleeping patterns." 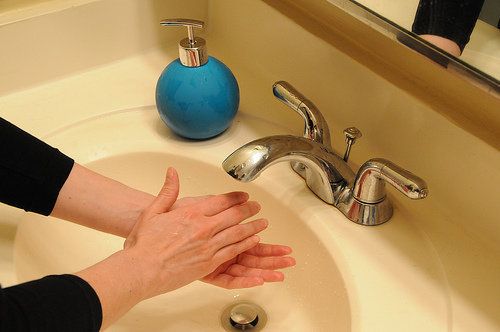 1 / 10
Hand Washing
There may be no more promoted solution to avoiding the flu this year (besides the flu shot, of course) than diligent hand washing. As many as 80 percent of infections are transmitted via contact like sneezing, coughing or touching surfaces that have been sneezed or coughed on, says Tierno, and then touching "your mouth, eyes or nose, which are the conduits of viruses into the body." He recommends scrubbing before eating, drinking or touching your face, and disinfecting shared surfaces in the home (like the bathroom) and the office, like phones, computers and fridge door handles.
<a href="http://www.flickr.com">Flickr</a>:<a href="http://www.flickr.com/photos/79418529@N02/6963931346">peapod labs</a>