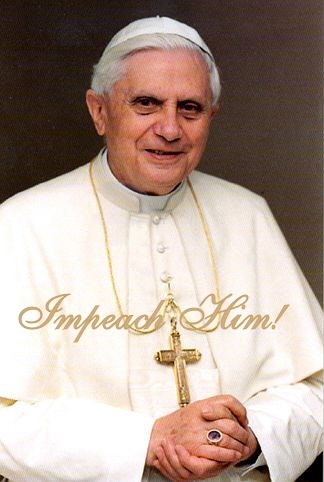 Amid all the justified outrage we all feel at Bernie Madoff and the AIG bandits, let us save some intense outrage for Pope Benedict XVI.

After insulting Muslims by declaring in 2006 that Muhammad had brought "things only evil and inhuman, such as his command to spread by the sword the faith he preached," after reiterating (through the Congregation for the Doctrine of the Faith) in 2008 that the subject of the ordination of women is not even open for discussion and declaring that anyone involved with the ordination of women will be automatically excommunicated, after lifting in January of this year the excommunication of Holocaust-denier Richard Williamson, now Benedict XVI opens a visit to Africa by telling the people of a continent decimated by AIDS that the distribution of condoms "increases the problem" of the spread of AIDS.

As I detail in my latest book, Grand Theft Jesus: The Hijacking of Religion in America (Crown), the cardinal sin of the Catholic Church -- a literally deadly sin, if ever there was one -- is its opposition to birth control. Far from being, as the Church contends, part of its moral doctrine, this policy is, plainly, the immoral doctrine of the Church. The use of condoms is a pro-life position. (More about that below.)

I am a Catholic and the idea that such a man is God's spokesperson on earth is absurd to me.

"Infallible on matters of faith and morals"? Why? Because a church council said so in 1870.

There are, of course, no provisions in the hierarchical institution set up, not by Jesus but by men who hijacked his name and in many cases perverted his teachings, for impeaching a pope and removing him from office. But there ought to be.

Just before he was selected as pope, Cardinal Ratzinger denounced the "dictatorship of relativism."

In fact, the current teachings of the Church on a host of interrelated issues--women priests, clerical celibacy, birth control, abortion, homosexuality, and, most basic of all, the sex of God--are themselves the result of the Church at various times in the past having been, in Ratzinger's words the day before he became pope, "tossed and swept along by every wind of teaching" to conform to the practices and prejudices of societies now long gone.

The Church's positions on these issues related to women and sex are not based on the teachings of Jesus.

The Church established from the time of St. Paul onward was set up as a No-Woman's Land. The general views on the inferiority of women come from Paul's interpretation of the literally incredible story of the creation of Eve from Adam, a story that men had made up to overcome their feelings of inferiority because of women's capacity to give birth. The ban on women priests also emanates from Paul's reliance on Genesis and from the Early Church Fathers' rejection of the role of women around Jesus and particularly the centrality of Mary Magdalene as one equal to St. Peter.

Priestly celibacy was not established as a requirement until the Middle Ages and was based on the belief that women are unclean because they menstruate. When Thomas Aquinas declared in the thirteenth century that "woman is defective and misbegotten," he was echoing Paul, Genesis, and Aristotle--not Jesus.

The Church's opposition to birth control and to abortion even early in pregnancy is largely an outgrowth of its all-male composition and those males' attempts to degrade women's physical powers by asserting that women and the intercourse into which they putatively tempt men are necessary evils ("It is well for a man not to touch a woman," Paul instructed the Christians of Corinth), the only purpose of which is procreation. The condemnation of homosexuals is based entirely on Old Testament rules established by men who feared anything that placed in question their insistence on the polarity of the sexes.

The idea that God is solely male is the work of the Church Fathers who chose which gospel accounts to include in the official New Testament and excluded all the Gnostic Gospels that contain references to an androgynous God, and of the bishops who met at Constantinople in 381 and modified the Creed to say that the Holy Spirit is male. The idea that a Creator could be of only one sex is absurd on its face. Yet this nonsensical belief, which actually diminishes God, has been one of the main bases for the subordination of women and values associated with them--precisely the values taught by Jesus--throughout the history of the Church.

The bottom line is that none of the Church's positions on women and sex come from the teachings of Jesus. All of them are the products of the very relativism that the current pope decries. The relativism of an earlier day has become the dogma of today.

Misogyny may not be "the Church's one foundation," but it is a major part of the base on which it was constructed.

An overwheming majority of American Catholics have long agreed that the Church's position against birth control is wrong. Only two years after the 1968 encyclical Humanae Vitae reaffirmed the Church's opposition to artificial birth control, "two-thirds of all Catholic women and three-quarters of those under 30 were using the Pill and other birth control methods banned by the Church."

And now for the pope to go so far as to indicate that condom use worsens the spread of AIDS -- there's an outrage that tops Madoff and AIG!

How many more are going to die of AIDS because of Benedict's lie about condoms?

Let's start a movement within the Catholic Church to impeach Pope Benedict XVI and remove him from office. While we're at it, let's replace him with a woman.

The Church needs a literal revolution--a turn back to the teachings of Jesus. Let's cut out all the middlemen who set up churches and doctrines to suit themselves.

Benedict XVI reversed the excommunication of a Holocaust denier. Will he excommunicate me for pointing out that he is a misogyny denier?

If this be heresy, make the most of it.

(Crown). This piece is an expanded version of one he wrote for the Newsweek-Washington Post "On Faith" site on Wednesday.