With a new clamor to impeach and remove the Republican governor of South Carolina, Mark Sanford, the question arises of whether this peculiarly American form of executive decapitation is an essential constitutional safety valve or an anti-democratic shortcut that is too often deployed to solve short-term political troubles.

After months of chagrin over Sanford's antics, South Carolina's Republican legislators gathered over the weekend to gnash their teeth over the political corner they now occupy. None was willing to defend the leader of their own party, who just months ago was stalking a possible 2012 bid for president.

With the state's ethics commission inquiring into his privately-paid travel as governor, Sanford's constituents still resent his mysterious five-day disappearance from the state last June to pursue his Argentinian inamorata. The episode spawned "hiking the Appalachian trail" as a bewitching neologism for adultery, yet that contribution has improved Sanford's standing only among lexicologists, not with South Carolina's voters.

After months of dancing around the prospect of impeachment, state Republicans may reach for America's favorite constitutional weapon against executive overreaching and downright blundering.

Handicapping Sanford's prospects of avoiding removal by a two-thirds vote of the Republican-controlled state legislature, the Myrtle Beach Sun-Call found them no better than a toss-up. 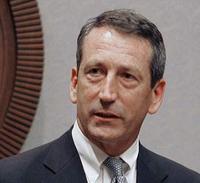 Sanford's jeopardy is sharpened by the legislature's broad impeachment powers under the state constitution. While the federal impeachment process imposes the largely opaque requirement that the accused have committed "high crimes and misdemeanors," in South Carolina the standard is far more clear and easier to satisfy: "serious misconduct."

Once again, when the political chips are down, the impeachment mechanism gets the emergency call. This year began with the Illinois legislature unanimously removing Democratic Gov. Rod Blagojevich after squirming through months of revelations about his efforts to swap an appointment to the U.S. Senate for personal advantage.

Who You Gonna Call?

So what is it with this impeachment thing? Is it a crutch for political cowards, allowing them to ditch good leaders who encounter popular turbulence? Or is it an essential safety valve for a representative government? Have we entered, in the phrase of Prof. David Kyvig, an "age of impeachment" in which political Queens of Hearts respond to every adverse development by crying, "Off with his head"?

Though every governmental mechanism is subject to abuse, impeachment stands as a singular success of American constitutionalism.

Impeachment descends from bloody English precedents dating back to the fourteenth century, when impeachment was used to challenge high officials and great lords. Indeed, the iambic rhythms of "high crimes and misdemeanors" derive from that far-off time.

But during their Revolution, much impressed with the dangers of executive and judicial abuses of office, Americans embraced impeachment and also changed it in fundamental ways. South Carolina and New York were the first two states to adopt impeachment provisions, and the Framers of the U.S. Constitution included the mechanism in the new federal constitution drafted in 1787.

American impeachment was a purely political process. The accused would face only removal from office, not any fine or imprisonment, or (in distant English precedents) beheading. This innovation transformed impeachment into an effective check on executive power, particularly when an executive enjoys a fixed term of office.

Impeachment recognizes that voters sometimes elect the wrong leader, and that leaders may go astray. Rather than suffer through months or years with a politically-crippled executive, impeachment allows a supermajority of the legislative branch to turn the page and start anew. With each legislator accountable to his own constituents, the impeachment power should be exercised in accordance with the popular will.

As Ben Franklin argued persuasively in 1787, impeachment allows "for the regular punishment of the Executive when his misconduct should deserve it, and for his honorable acquittal when he should be unjustly accused."

Americans have not been shy about using impeachment to challenge presidents, beginning with the calamitous Andrew Johnson, who escaped removal from office in 1868 by a single vote. Richard Nixon scampered from the White House, one step ahead of an impeachment vote, while Bill Clinton's personal peccadilloes fell short of justifying his removal from office.

The wisdom of impeachment can be measured by its international popularity. India, Pakistan, Russia, the Phillipines, Brazil, Nigeria, Germany, Romania, and many other nations have adopted variants of America's impeachment mechanism.

(In contrast, no foreign nation has ever adopted another American constitutional innovation, the electoral college.)

So South Carolina's legislators should not be shy about examining whether Gov. Sanford should be impeached. That question is a crucial part of their responsibilities. Indeed, they might even remember that Sanford, while a congressman in 2000, voted to impeach President Clinton.