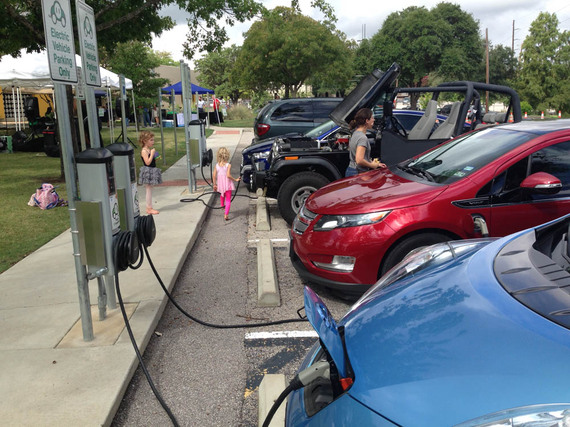 Recently, we at AlterAction, a consulting firm focused on large-scale behavior change, and Sierra Club -- the biggest grassroots environmental group in the U.S.-- took an in-depth look at the U.S. electric vehicle ("EV") marketplace. A widespread switch to EVs is one key way to slash emissions, so our "charge" (sorry, pun intended) was to estimate the potential impact of EV policy and program options in order to identify which ones are most likely to increase EV sales.

We reviewed available research and interviewed dozens of EV experts in a variety of arenas. AlterAction built quantitative models that estimate the impact of more than a dozen types of programs on EV sales. Some of the results won't shock you. For example, we contend that consumer rebates (a government check in the mail for purchasing or leasing a plug-in car), tax credits, and privileges such as carpool lane access for EV drivers will have the greatest impact on EV sales over the next few years. A recent study on EV incentives by the International Council on Clean Transportation came to similar conclusions.

But still, there were some important surprises from our research. Here are three examples:

1. Public charging stations get the most attention, but home and work charging are more important.

While public charging infrastructure can help reduce "range anxiety" for potential EV buyers, and its visibility can serve to educate drivers, there is only modest correlation -- if any -- between increased EV sales and the number of public chargers per capita. Cars spend the vast majority of their time at home and the second largest amount of time at the workplace. Plenty of work remains to be done to reduce barriers to EV ownership in these two locations. Workplace charging not only allows for longer commutes, it can even enable people without dedicated parking at home to own an EV. And installing chargers at private workplaces usually involves less red tape than installing them in public spaces.

Also, public charging stations that initially provided free charging and then went to a fee model saw a dramatic fall-off in use. Public charging stations must be maintained once installed. The presence of unused and abandoned charging stations may actually discourage prospective EV buyers -- sending a subtle message that EVs have failed to take hold. In the near-term, most EV buyers will likely be commuters who harbor no illusions about taking a cross-country trip in their EVs.

We're not saying that public EV chargers aren't a good idea -only that it's likely even more important to focus on home and work chargers. The U.S. Department of Energy's Workplace Charging Challenge, which tells us that people are 20 times more likely to drive an EV if there are chargers at work, is making a dent with over 165 employers -from large corporations to small family-owned businesses -- already signed up to provide EV charging to their employees.

Most states with higher per capita EV sales have at least one thing in common: the existence of an effective high-level task force dedicated to making their state EV-friendly. States with such task forces move more quickly in advancing a wide range of successful EV-friendly policies. They also provide a ready channel for EV advocates to pressure lawmakers for pro-EV programs. Characteristics of successful state task forces include: 1) members with political power such as governors, mayors, legislators, and agency heads/commissioners; 2) diverse membership, including utilities, transportation, urban planners, universities, EV enthusiast groups, and environmental groups; and 3) broad enough scope to consider holistic programs and policies rather than just infrastructure or incentive programs.

State task forces have notched some impressive victories for EVs. In Massachusetts and Illinois, $2,500-4,000 EV rebates were instituted as a direct result of the formation of the state Task Forces. In Maryland, the EV Infrastructure Council found that their existing EV servicing equipment incentive was not effective, so they adjusted it to make it more appealing to consumers. The California PEV Collaborative has succeeded in putting in place or promoting a dizzying array of EV programs, including a purchase rebate, incentives for condo dwellers, and strong EV utility programs.

More states should create these high-level EV taskforces, and ones with existing taskforces should make sure they continue adjusting and innovating.

Nine states have adopted California's "Zero Emission Vehicle" (ZEV) rule, which means automakers are required to sell a certain number of ZEVs in those states. However, automakers get credit for EVs sold in all ten states combined; it's known as the "travel provision" because the credits can "travel" from state to state.

The upshot is that automakers can comply with all the state ZEV rules by selling EVs only in California, a state where Governor Brown recently signaled he wants a 50% oil use reduction in transportation by 2030. This is why we see "compliance cars," or EV models sold only in California and are not available elsewhere. The travel provision suppresses EV adoption because car buyers outside of California have far fewer car models to choose from.

Over the next weeks we'll share additional findings from our EV research. Stay tuned.

Mike Walker is the founder and CEO of AlterAction, and his blog is here. Gina Coplon-Newfield is the Sierra Club's Director of Electric Vehicles Initiative.