Great experimental innovators are acutely aware of the costs of their particular form of creativity, as they spend long periods in pursuit of the elusive ideal of creating art that will be as powerful, vivid and honest as reality. So it comes as no surprise that they recognize their predecessors in this enterprise.

Miguel de Cervantes was a great experimental novelist. The scholar Edwin Williamson remarked that "it is clear that Don Quixote was not conceived whole, it took shape gradually...as its author explored the creative possibilities opened up for him by the crazy obsession that had taken hold of his would-be hero." A.J. Close observed that Cervantes' greatest literary legacy lay in characterization: "his portrayal of Don Quixote and Sancho, with all that it implied for the subsequent treatment of character in the genre of the novel, was obviously the most important lesson of them all."

For novelists in the modern era, Don Quixote has represented an epic story of a character motivated by noble illusions that ultimately foundered on the reality of everyday life. The gallant failure of the knight of La Mancha has made the book a landmark for experimental writers. Prominent among these was William Faulkner. Whenever he was asked to name the books he valued most, Faulkner consistently placed Don Quixote first on the list.

Faulkner was a thoroughly experimental novelist, who explained that writers had to choose between symbols and reality: "either he is delivering a message or he's trying to create flesh-and-blood, living, suffering, anguishing human beings." He was firmly on the side of the human beings, as he wanted to make characters who found their own way: "the writer is learning all the time he writes and he learns from his own people...they teach him, they surprise him." He believed in a single path to achievement: "Teach yourself by your own mistakes. People learn only by error." 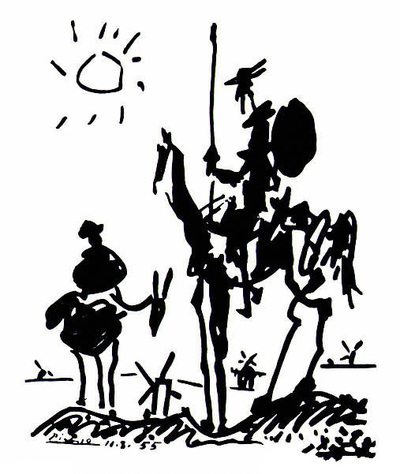 Faulkner had an unusual, distinctively experimental definition of success. He once declared that "failure to me is the best. To try something you can't do, because it's too much, but still try it and fail, then try it again. That to me is success." He consequently judged writers by "what I consider the splendor of their failure...on the degree of the attempt to reach the unattainable dream, to accomplish more than any flesh and blood man could accomplish, could touch." Nor did his definition apply only to art: "man's immortality is that he is faced with a tragedy which he can't beat and he still tries to do something with it."

Walter Slatoff titled his study of Faulkner Quest for Failure, and contended that "it is not mere verbal paradox to call Faulkner's effort a quest for failure. It is a quixotic ideal." The deeply experimental Faulkner considered perseverance in the face of the certainty of imperfection to be the most noble of goals. He told interviewers that he reread Don Quixote once every year, and it is clear that he drew inspiration, and reassurance, from Cervantes' magnificent tale of the quest and failure of the errant knight from La Mancha.