A century ago, William Merritt Chase was every bit as famous as Monet or Manet were then, or now for that matter.
Yet sometimes artists fall out of favor, and it takes a dedicated art historian or museum curator to bring him (or her) out of the shadows. In Chase's case, it took three: is Erica E. Hirshler, Croll Senior Curator of American Paintings at Boston's Museum of Fine Arts; with Elsa Smithgall, curator at the Phillips Collection in Washington, D.C.; and Katherine M. Bourguignon, curator at the Terra Foundation for American Art in Paris.
Together, they assembled a magnificent new exhibition of Chase's work from no less than 60 collections across the United States.
So who was this artist, anyway?
Chase essentially defined American art at the close of the 19th century.
He was America's answer to Impressionism, the leading art teacher of his day, and the link between the traditional landscapes and fruit bowls of mid-19th century art and the modern world of art that came in the train of World War I.
But he was much more than that.
Chase was born in the town of Nineveh, Indiana, about as homespun and Midwestern a boyhood could get.
A group of Indiana businessmen recognized the young artist's potential and, honoring his German roots, sent him not to France, where he would be distracted by all things Parisian, but instead to Munich, another thriving arts community.
In Munich, the young Chase developed a facility for imitating--with his own unique twist--the old masters.
He wasn't merely copying; he was creating his own comment on the way Frans Hals and Rembrandt painted, setting old-fashioned imagery in ultra-modern uses of space on the canvas.
He then moved to 10th Street in New York City, then the center of a thriving, Gilded Age arts community.
There, he painted a highly confident self-portrait--the image of a young man bursting with certainty that he will succeed as an artist.
And he did. Not only were his paintings in high demand but he became one of the principal art teachers of the age, influencing many of the painters who would make their names in the early 20th century.
What set Chase apart from his peers, aside from his often riotous use of color, was the way he used space in his pictures.
You might see a woman lurking practically in the shadows.
Or the subject of the painting in a corner, while the center of the picture was empty space.
Also, Chase uniquely "got" women.
Not in a grubby, Trumpian way.
His paintings reveal a tenderness for women absent from, say, the caricatures of women to be found in the work of Toulouse-Lautrec, the punishing poses favored by Edgar Degas, or the monochromatic dullness of Whistler.
Chase, happily married by all accounts and the father of eight, including six daughters, loved and respected women, and those emotions express themselves gloriously in his work.
You see sweet domestic scenes with his young daughters, playing hide and seek in one painting, getting ready for a visit to Grandma's house in another.
You see women posing in stances that represent certainty and leadership--remember, this is the 1880s--not subservience or objectification.
Above all, Chase makes everything beautiful, whether it is his wife and children, a Brooklyn backyard full of laundry, the interior of his studios or homes in Manhattan or Shinnecock Hills, where he taught in the summers, or even his own deeply colorful and imagined response to Whistler's Mother, a painting as famous then as it is now.
Chase's work had the distinction of being shown at the Salon in Paris, perhaps despite the fact that it was so imaginative, colorful, and rule-breaking.
And then, as so often happens, tastes changed, and the man from Nineveh passed from the center of the art world into an undeserved obscurity.
No longer.
Thanks to the MFA and the Phillips Collection, it is now William Merritt Chase's time, a century after his death.
Chase represents a serious gap in the education of most art lovers today.
The show at the MFA, headed for Venice, where Chase's work appeared in the first Biennale, is surely destined, and rightfully so, to change all that. 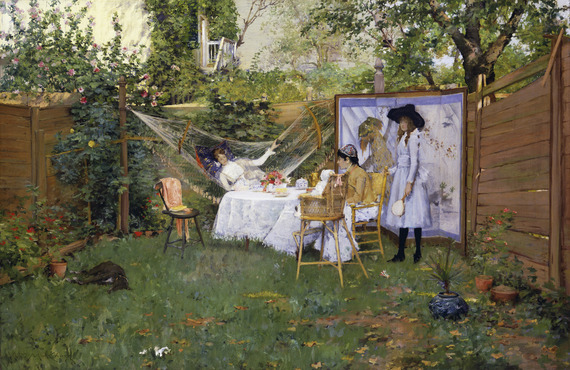 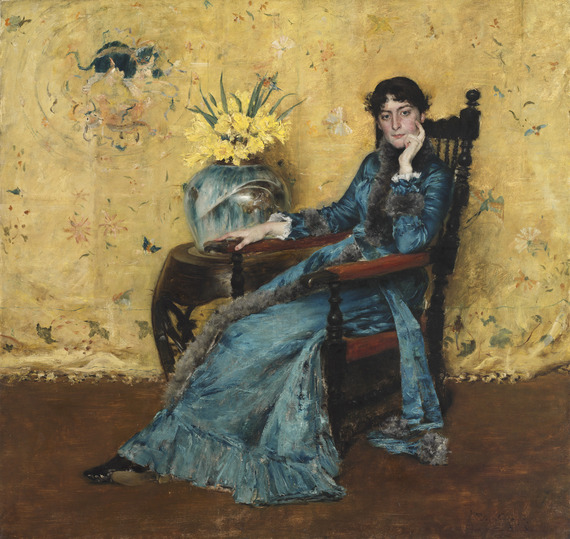