One thing I've learned producing events for Improv Everywhere over the past decade is that if I give our participants creative license, they'll come up with choices that are far better than the ones I could brainstorm sitting in front of a blank Google Doc. Not only will the project be greatly improved by their creativity, participants empowered to make their own choices wind up having far more fun. I've also learned the importance of allowing the online audience to contribute their own ideas, creating a community rather than a traditional one-way conduit of creator to viewer.

Improv Everywhere is an obvious misnomer -- our events are not improvised but organized meticulously in advance by me and my collaborators. I came up with the name when I was 22-years-old and a few weeks away from taking my first improv class at the Upright Citizens Brigade Theatre in New York. In the early days, when the pranks involved just two or three friends at a time, the ideas were largely improvised. Now that the projects often involve hundreds, or even thousands of participants, I spend weeks coming up with a game plan. An improvisational spirit remains in what we do, in part because I never know how members of the public will react to us, and in part because I never know what choices our participants will make until the prank unfolds.

Allowing our real life and digital crowds to have a voice has only led to better work. It's thrilling to not know what hilarious idea might wind up in my inbox tomorrow. - Charlie Todd

In 2007 we staged our Frozen Grand Central project where just over 200 participants froze in place for five minutes on the Main Concourse of the Grand Central Terminal, making it appear to commuters and tourists that time had stopped. I briefly considered coming up with a long list of poses to recommend to the participants, but instead settled on giving them minimal guidance. They were told to freeze while doing something active like shaking hands or sipping a drink, anything that made the fact that they were frozen more obvious. By trusting the participants to make their own choices within these parameters, the end result was far more interesting and funny. One man froze in place just after spilling a pile of documents from his briefcase. A woman froze in place while eating yogurt, the contents eventually dripping off her spoon as she stood motionless. A couple chose to freeze mid-kiss, locking lips for five full minutes. I had thought of none of these options. 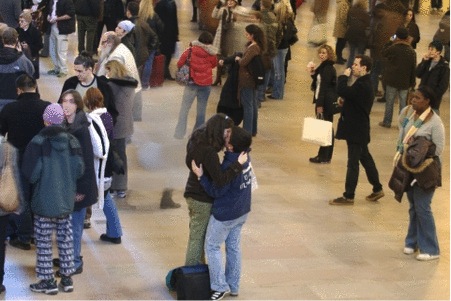 On a few occasions entire projects have been dreamed up by a member of our crowded mailing list. One of my favorite emails ever was from a man who wrote to say that he looked exactly like a painting in the Metropolitan Museum of Art. He proved it by attaching a photo of himself and of the painting, a portrait of King Philip IV by Velazquez. We had him show up to the Met wearing the same costume as the king, and we staged an autograph signing in front of the painting. Dozens of folks posed for photos and asked for autographs; we lasted about 15 minutes before a humorless guard decided to show us to the door. Without an open submission policy, this gem of an idea would have never landed in my inbox. 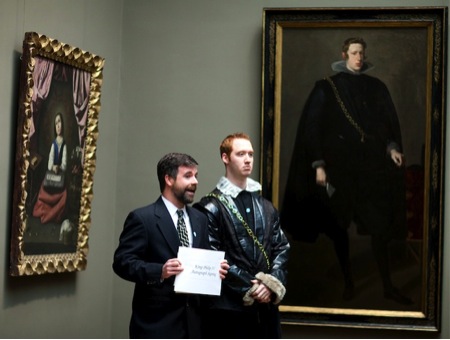 I probably get four or five ideas emailed to me every day via the site. Most I've heard before or simply don't find that exciting, but every now and then something great arrives. A high school kid in Texas wrote in 2006 to suggest we get a large crowd to dress in blue polo shirts and khaki pants and invade a Best Buy. I staged that idea with glee as soon as I possibly could.

More often ideas that are sent in aren't quite right, but inspire me to think of a location or method I had not previously considered. Many of our projects have resulted as a mashup of a variety of sources of inspiration. One person emailed to suggest we turn an entire Staples into an office. Another wrote to suggest holding a boardroom meeting on a subway car. When I happened upon the office chair department of the 6th Avenue Staples, I realized a mix of both of these ideas would be perfect.

While the big creative decisions about our projects are ultimately made by me and other longtime members of the group, allowing our real life and digital crowds to have a voice has only led to better work. It's thrilling to not know what hilarious idea might wind up in my inbox tomorrow. If you have one, let me know.