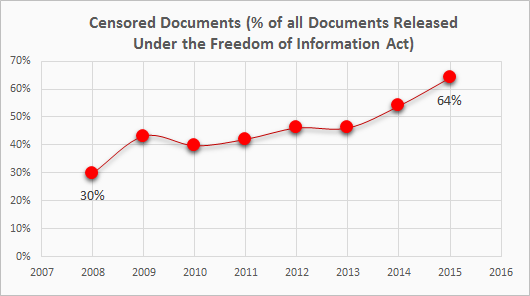 Which government agencies receive the most Freedom of Information (FOIA) requests? How many of those requests yield responsive documents? And of those that do not, what are the most commonly stated reasons?

Perhaps most importantly, does the Obama administration live up to its claim of being the "most transparent" administration ever? (Spoiler Alert: No)

Last month, federal government agencies released their 2015 Annual FOIA Reports, which include detailed stats on how they responded to each and every Freedom of Information request.

Here is a rundown of what they reported, starting with what the Associated Press found in its analysis.

What the AP found

Shortly after the 2015 Annual FOIA Reports were released, the
Associated Press
published an analysis of the data, reaching the following conclusion:

The Obama administration set a record for the number of times its federal employees told disappointed citizens, journalists and others that despite searching they couldn't find a single page requested under the Freedom of Information Act

There is no doubt the AP's conclusion is factually correct. The government failed to find the requested records 129,825 times last year, a new high. And a time series plot of the percentage of requests granted (shown in this chart) shows an alarmingly steep downward trend. 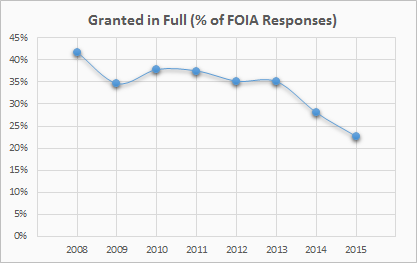 In 2008, the last year of the Bush administration, 41% of FOIA requests were granted in full. Since Obama took office, that number has steadily declined, hitting a new low of just 23% in 2015.

Having now spent a few days digging through the data myself, I think the AP gets the big picture right: under this administration, the government has become less transparent.

However, contrary to what the high-level figures imply, agencies seem to be turning up as many records as they always have. As explained below, what's changed is the likelihood that those records arrive with portions erased or withheld.

To accomplish this new level of censorship, agencies have expanded their use of one particular, broadly-defined clause in the Freedom of Information Act: Exemption 7(e).

Building on what the AP reported, here is a deeper dive into the data.

A handful of agencies accounted for the majority of FOIA requests

Here is how the requests broke down by agency in 2015. Each square is sized relative to the number of requests processed by that agency. 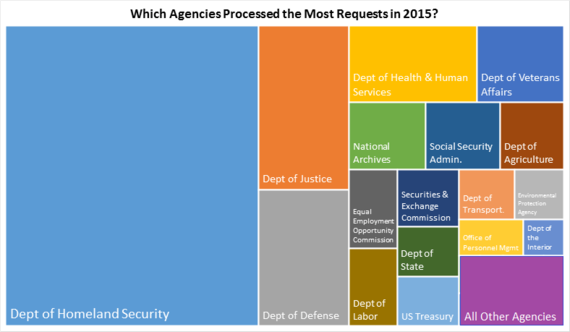 Of those, the busiest agency by far was the Department of Homeland Security. Last year, it processed 348,878 Freedom of Information requests, about 45% of the government-wide total.

The chart below shows how agency responses to FOIA requests have changed over time.

If you separate the requests into two categories, those that yielded documents and those that did not, here's how it shakes out.

Requests that returned documents: ~60% of cases

The two bottom areas of the chart represent cases in which the agency responded with
something
(more below on what that something could be). Overall, the total has not changed much over time, but the balance has shifted away from
full grants
(a complete set of documents) toward more
partial grants
(documents with portions withheld or erased).

Requests that returned nothing: ~40% of cases

The four brown-yellow sections in the chart are those requests where the agency came back with nothing, for one reason or another. Likewise, this total has also remained fairly constant over time. And so have each of the four individual components. Here's a rough breakdown.

As shown above, FOIA denial rates and "no records found" rates have remained constant since 2008. What has increased is the frequency of partial grants (which you could just as easily call partial denials). The trend is clear when you look at the stats in aggregate, and also when you look at each agency individually.

The table below shows the percentage of requests that received partial grants in 2008 and in 2015. Together, the 20 agencies shown accounted for 97% of all FOIA requests that were processed last year. And all but 3 of them are awarding more partial grants today than they were in 2008.

What does it mean that agencies are awarding more partial grants?

It's hard to say. A partial grant could be as trivial as the removal of a few inconsequential words. At the other extreme it could be a bunch of entirely blacked-out pages. It could also be the withholding of entire documents.

For an entertaining look at some of the most egregious examples of "partial grants", check out Muckrock's redaction hall of shame. 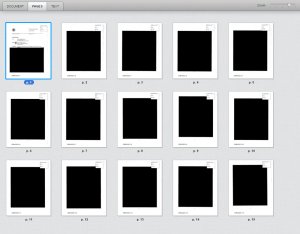 There is nothing in the annual FOIA reports about how much information agencies are withholding from partial grants. But the reports do cover agencies' use of FOIA exemptions, which give some clue as to the type of information that is being withheld.

Use of FOIA exemptions: what kind of information are agencies withholding?

Agencies are only permitted to withhold / redact information if it falls under one of 14 legal exemptions (technically 9 exemptions, one of which has 6 separate sub-exemptions).

The chart below shows how many times each exemption was applied in 2015 as compared to 2008.

The most common justifications for withholding information: exemptions 6, 7(c), and 7(e)

Both of these exemptions are fairly specific. And the information that gets withheld is normally not even material. For example, when requesting an agency's FOIA logs (a list of requests that the agency has received), I don't think anyone really cares whether the document includes the requesters' home addresses.

The third most commonly used exemption, Ex 7(e), is more controversial. Here is how it's defined:

Exemption (7)(E) protects from disclosure information which would reveal techniques and procedures for law enforcement investigations or prosecutions or that would disclose guidelines for law enforcement investigations or prosecutions if disclosure of the information could reasonably be expected to risk circumvention of the law.

Most of the other exemptions do not allow agencies to withhold information unless they can point to a specific negative consequence that would result from public disclosure. In contrast, Ex. 7(e) does not require the government to show a particular determination of harm or risk of circumvention of law, giving agencies much more discretion over what they can withhold.

Also, the term "law enforcement" has a more general meaning that you might initially think, covering the enforcement of both criminal and civil law. Here are a few examples of what it includes:

The most transparent administration in history?

Since 2008, agencies have become increasingly aggressive with their censorship of documents. It has now become the norm for FOIA-ed documents to arrive with portions removed or erased. This trend is true not only of the government as a whole, but of nearly every agency individually.

What kind of information is being withheld today that wasn't being withheld in 2008? Based on the growing use of Exemption 7(e), it appears agencies have decided to become less transparent about their activity behind the scenes to enforce the law. Presumably, the growing secrecy is not motivated by anything malicious, but rather a desire to keep the population safe.

If the biggest question of today's government is whether greater safety is worth sacrificing freedom, the data gives a pretty good idea of which direction the the current administration is leaning.

If you'd like to dig through the data yourself, you can download the raw files from FOIA Mapper.

There are certainly many ways of interpreting the numbers, but if there is any doubt where the current administration stands on transparency, here are some recent stories that answer the question pretty clearly.