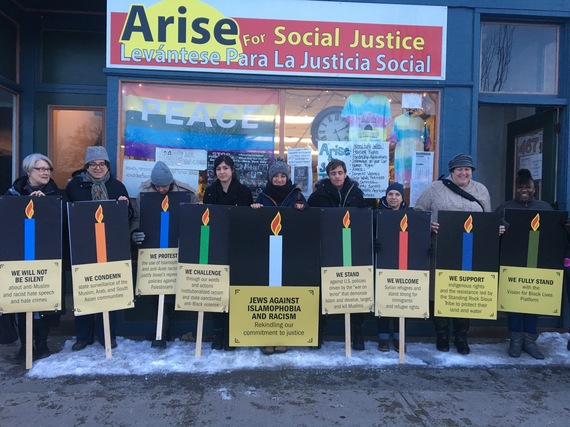 On Wednesday evening, Dec. 21st, in 25 cities across the United States, Jews, Muslims, and other communities joined together to say with clarity and strength: No to Islamophobia; No to Racism: Yes to Justice; Yes to Dignity for All Communities. Organized to coincide with the holiday of Chanukah, which begins Saturday evening, Jewish Voice for Peace (JVP) and its Network Against Islamophobia (NAI), together with JVP chapters and partners, initiated the actions to reignite their commitment to challenging all forms of Islamophobia and racism.

Written on eight candles in the shape of a Chanukah menorah, the commitments were read aloud for all to hear and take in. Among the commitments:
•We condemn state surveillance of the Muslim, Arab, and South Asian communities.
•We fight anti-Muslim profiling and racial profiling in all their forms.
•We protest the use of Islamophobia and anti-Arab racism to justify and perpetuate Israel's repressive policies against Palestinians;
•We challenge, through our words and actions, institutionalized racism and state-sanctioned anti-Black violence.

In Kingston, New York, participants braved the cold to join the action called for by the newly created Hudson Valley JVP chapter. In Sacramento, hundreds of people stood together for a creative program ending with a question from the organizers, "How will you follow through on your commitments?"--and suggestions of opportunities, educational events and actions.

In Austin and New Haven, in Ithaca, Portland, and Raleigh--and in cities large and small-- community members held their candles, visibly and with conviction.

In Chicago, the local JVP chapter partnered with American Muslims for Palestine (AMP), the Council on American-Islamic Relations (CAIR) and other groups to call upon Governor Bruce Rauner to reverse his position of pausing the relocation of Syrian refugees and, instead, to welcome and support their resettlement with all the resources at his disposal.

A vibrant march co-organized by JVP Boston made its way through the streets of downtown Boston. Hundreds of people participated, and the large group of social justice groups* that cosponsored the event expressed a commitment to addressing a wide range of issues. 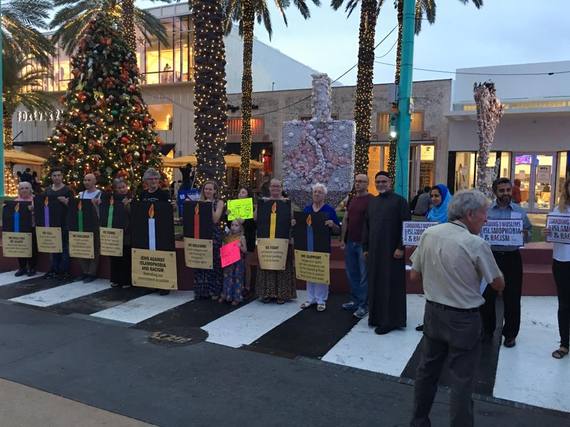 And in Miami Beach, where I live, CAIR FL and JVP joined to create an event that brought many communities together. In addition to music and readings, a number of children read signs they had made with words of "compassion," "justice," "respect," "equality," and "a world without Trump," in response to being asked what words came to mind when they thought of the world they wanted to live in.

The Chanukah actions are part of a broader commitment to engage in this work thoughtfully and consistently and to stand against all forms of Islamophobia--whether it is a hate crime in the street or violence resulting from US domestic or foreign policies. JVP's Network Against Islamophobia has as its foundational principles being accountable partners in the larger movement led by Muslims and those who have been directly impacted by Islamophobia and anti-Arab racism, and, at the same time, doing the work within Jewish communities to bring these issues to the forefront. That also means engaging within our communities in learning together through workshops and discussions about the multiple ways in which Islamophobia is manifested and how we can do this work most meaningfully and effectively.

Muslim communities and other impacted groups have been organizing for a very long time. The very positive recent decision by President Obama to dismantle the regulations that enable the NSEERS (Special Registrations) program to exist grows out of years and years of organizing by groups like DRUM (Desis Rising Up and Moving) in NYC and by other groups that have been directly targeted by these government policies and programs. As that organizing continues to grow, JVP and NAI hope to be genuine partners in this work.

Community-building was also a key part of Wednesday's actions, something that is much needed at this time. Participants made their commitments, not just for the evening, but as part of long-term, sustained, collaborative work for justice.