In our era of celebrity, where every life is made public through email, blogs and Facebook, one of the greatest oddities may be that there is not a livelier discussion about the individual's basic need for a more private space.

This is a question I have pondered while on book tour with The Red Leather Diary: Reclaiming a Life Through the Pages of a Lost Journal, about my discovery of a young woman's diary, kept in the 1930s, rescued from a steamer trunk in a dumpster outside of my Manhattan apartment building, and its return to Florence Wolfson Howitt, its owner, at 90.

Two kindred spirits, separated by seventy-five years, a nonagenarian and a 27-year-old writer, Florence and I have been connecting with readers and people on self-discovery quests of their own. Before the advent of self help sections in mega-bookstores, Florence recorded her search for self, on her diary's gold-edged pages, in blue and black ink.

The Red Leather Diary traveled to Denver recently for The Power of Writing Journal Conference, bringing together hundreds of journal writers from across the globe to explore what it means to record one's life. The sub culture falls between the book club and the yoga mat, but speaks to the enduring power of the handwritten word.

Writers, librarians, holistic healers, life coaches were in attendance, along with professionals certified by -- who would have guessed -- the National Federation for Biblio/Poetry Therapy, which has provided the credentials for those who have carved out careers leading journal writing and journal therapy groups.

Pen wielding women with colorful books filled the ballroom of the Sheraton Denver West. Some looked deceivingly like knitting circle ladies. One young woman had a diary entry tattoo. There was talk of bones, books, parchment, and writing on cave walls as the original diary. Attendees were reminded that Sappho's poems were found stuffed into the throat of a dried out alligator in a mummy's tomb, her words tweezed out by Egyptologists. 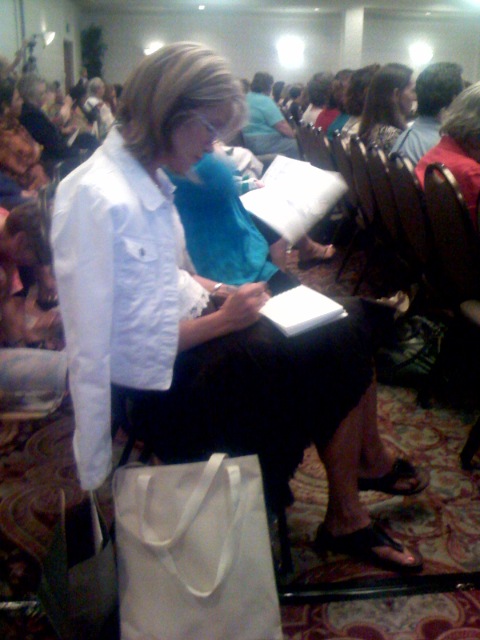 A woman writing in her journal at the conference.

Journaling was likened to deep sea diving. Joseph Campbell's "follow your bliss" was invoked. Many in attendance treat journaling as a spiritual practice, a path to self enlightenment, which, of course, philosophers have been doing for ages.

Michael Blumenthal, the award-winning poet, was there. "I'm usually really cynical about things like this," he said, leaning back in his chair under the ballroom's chandeliers, "But I'm here." One of his poems, "The New Story of Your Life," which prefaces The Story of Your Life by Dan Wakefield, has generated for him a devoted readership of diary keepers.

Scholars point to the first diaries being kept by Japanese ladies of the court around the year 1000, known as "pillow books." Keats was a diarist as were Ben Franklin and Kurt Cobain. Parallels have been made between journaling and the Surrealists experimenting with automatic writing in the cafes of Paris in the early-1920s.

Despite the mass migration online to chronicle daily dramas via email and on blogs, journaling today is a multibillion dollar industry with makers like Hallmark, Moleskine, Filofax, and evidenced in the piles of blank books for sale near the cash register at Barnes & Noble and Wal-Mart.

In an internet poll on About.com, Kathleen Adams, a licensed psychotherapist and a registered poetry/journal therapist who lives in Denver, was listed alongside Anais Nin and Anne Frank, as one of the three most significant influences on contemporary journal keeping. With over a 500 journals in her personal archive, Ms. Adams, who is the author of several books, including Journal to the Self, organized the conference with workshops such as: "What If Your Life Were a Novel?", "Write Your Memoir and Still Get Invited Home for the Holidays," "Journal Magic: Potions for Self-Discovery."

Tristine Rainer, 63, the director of the Center for Autobiographic Studies, teaches writing at the University of Southern California, and was a close friend of Anais Nin, gave the keynote speech, entitled, "Anais Nin and the Destiny of Diaries." Ms. Rainer first encountered Ms. Nin when she was 18, through her own godmother who lived in New York, who sounds very much like a fairy godmother. The prolific diarist was also known for her erotica and her relationship with Henry Miller.

What is the future of diaries?

"The Internet has become one huge diary of the human race," said Ms. Rainer very matter-of-factly. According to her, this may be cause for concern. In celebrity culture, where one is defined from the outside in, as with Facebook and social networking sites, she is skeptical of whether one has the opportunity--and time--to form an inner self.

"Looking at yourself from the outside in is what blogs reinforce," explained Ms. Rainer, who has a distaste of celebrity for the same reason. "It's actually dangerous," she said. "Can blogs do what a private diary can do? If I had to give an answer, I'd say no."

In diary writing, Ms. Rainer maintains a profound breakthrough occurs when by looking deeply into one's self, the individual comes out with the realization of their common humanity and connection to the universe.

Where is the quiet space, the stage where you are the lone performer, audience and critic, which the diary provides? 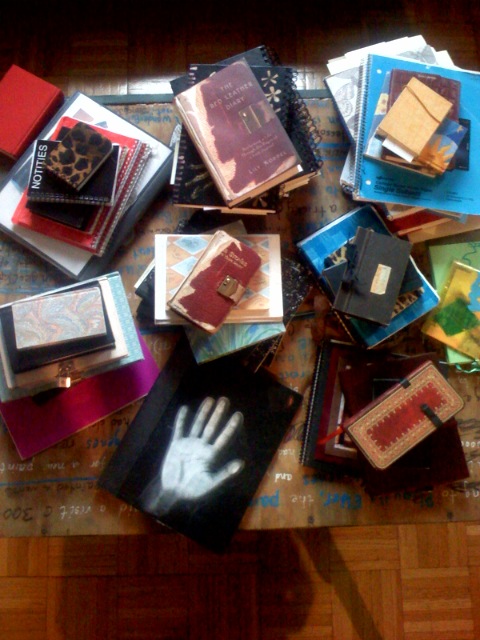 For the future, Ms. Rainer hopes to see a physical world-wide library of diaries, which she called, "A great library of the self." "The diary library," like the Library of Congress, could also be housed in local branch libraries, so that if one moved to a new city, they could read and learn, perhaps from the person who lived in their apartment a century ago (which is essentially what happened with Florence and me.)

Ms. Rainer was a pioneer in the therapeutic writing movement with her 1978 book, The New Diary. Other influential figures in journaling include Ira Progroff, who developed the Intensive Journal Method, and Christina Baldwin, who was at the conference.

"Stories build bridges," Ms. Baldwin lectured in her workshop, "The Thread We Follow." "You're a fractal of me. We're all in the well together." The primordial ink well, that is. In her book Storycatcher, she begins, "Every person is born into life a blank page-and every person leaves life as a full book."

Ms. Baldwin sees her work with journaling as an outgrowth of the feminist movement. Historically, she said, journal writing was a very private and vulnerable act. Today, of course, women don't have to hide their diaries and they are less likely to be in pastel colors with tiny keys.

Ms. Baldwin summed up the assumption, which she believes is the bedrock of every blog: "Of course I have a voice and I want to hear it!" She believes some take for granted the trail she and countless others blazed.

James Pennebaker, a research psychologist, spoke about scientifically proven health benefits of writing, like research showing how writing about a traumatic experience helps wounds heal faster. When people write about emotional upheavals, their blood pressure is lowered and their use of health care facilities decreases. Writing helps combat depression and raises self-esteem.

"Writing effects peoples brains," said Mr. Pennebaker, who is a professor at the University of Texas. "After people write, there are changes in their brain waves. It's related to emotions." To his audience's stunned delight, he added, "duh."

A tall gray-haired woman in the audience, Cyncie Winter, spoke about her work using expressive writing to treat posttraumatic stress with soldiers returning from Iraq and Afghanistan. Wendy Thompson, an arts educator, has used journaling as a coping tool with children of suspected "undocumented" workers on a Del Monte fruit plant in Portland, whose parents were taken away during a home raid in the middle of the night by U.S. Immigration and Customs Enforcement officers.

"Writing something down simplifies it," said Mr. Pennebaker, explaining the process of why writing about trauma makes it manageable. He said that while poetry encapsulates an experience, "grabs it," he argued that "Poetry is not nearly as healthy as prose writing." He added, "Prose forces us to integrate our experiences."

The only sound to be heard was a room full of pens making their way across paper. -- Check out
The Red Leather Diary
trailer below.
Advertisement

For more information on Lily Koppel and her book, The Red Leather Diary, please visit her website: RedLeatherDiary.com.