The vast majority of the news coming out of Afghanistan is about increased insecurity, war, poverty and youth leaving the country to seek refuge elsewhere, but this is not the whole story. Many Afghans are working in big and small ways to empower themselves and build a better future for their children. Undeterred by the barriers and obstacles they face, Afghan women are on the front lines working to rebuild Afghanistan. They are creating businesses, running schools, joining the police force, advocating for education and participating in public life. These women are pioneers who warrant headlines and investment.

One of these women is Fatima. 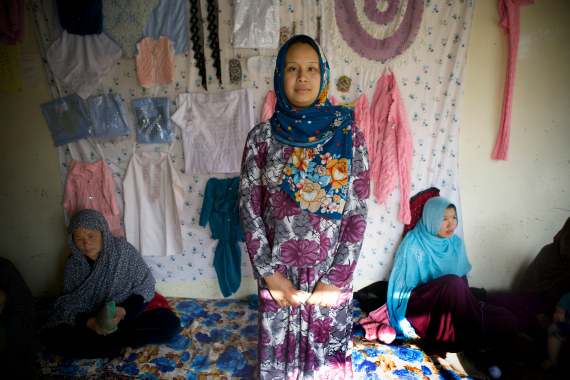 Fatima with her women's association in Afghanistan. Photo credit: Rada Akbar
At 27 years old, Fatima is already the mother of three boys, and today the leader of a women's association. She lives in one of the poorest and most under-served areas of Kabul with her children, her husband, and his family. Her journey to economic stability has not been easy. Last year we sat down with Fatima. As she shared her struggles, Fatima's kind face lit up with a defiant smile.

Despite her desire to attend the local university, Fatima's schooling ended when she was married because her husband's family did not give her permission. In Afghanistan, women often require the permission of male family members to leave their homes for work or school.

"I was not happy to be in the house and just work with the dishes, with the clothes."

In 2013, Fatima saw an opportunity to continue her education.

She learned about a training program run by Women for Women International from her neighbors and was excited about the opportunity to learn new skills. At first, her husband and in-laws refused but she persisted. Eventually she succeeded and was able to attend trainings.

During Fatima's time in the 12-month program, she participated in a vocational training and learned how to maintain business accounts and manage assets. She learned embroidery and sewing and put her new-found knowledge and skills to work. Soon she was ready to earn an income.

Building a circle of trust and support

When she joined the WfWI training, Fatima noticed that many of the women in her neighborhood were working in isolation, and realized that together, they could start a small business. Fatima enlisted her husband's support, and soon she recruited 20 other graduates of the program to form a women's association. 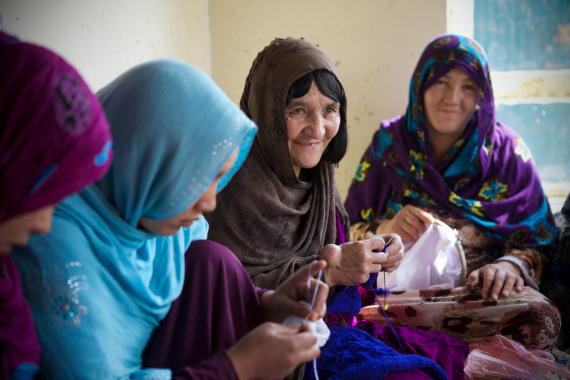 Women in Fatima's association come together to earn money and support one another. Photo credit: Rada Akbar

Today, Fatima's group enables the women in her community to generate income and save money. It also serves as a circle of trust and support where the women share their problems and seek solutions together. Fatima says that when the women of her group come together, they feel stronger as they share stories of street harassment and other issues they face with one another. In the safe space of Fatima's small room where her group gathers, the women support each other and no longer feel alone.

>>Check out more #SheInspiresMe stories from Women for Women International<<

Things have changed for Fatima. She is now able to provide for herself. She is also contributing to the education of her oldest son and other family costs.

"My older son likes writing very much. I buy pens and notebooks for him and I study with him at home," she says.

Fatima is not the only woman whose life has been transformed by earning an income. Today, women make up 16 percent of the formal, paid labor force in Afghanistan, but many women work outside of the formal economy by contributing to family businesses, raising animals, tending gardens, or, like Fatima, running small businesses. Earning an income gives women like Fatima greater influence over household decisions, such as educating their children.

Since 2002, WfWI-Afghanistan has worked with more than 100,000 women in Kabul, Kapisa, Nangarhar, and Parwan. Ninety-four percent of WfWI training participants in Afghanistan have received no formal education. For them, the opportunity to join a class of women opened a door to the education they had been denied.

Prior to the training, participants report earning on average $0.13 per day, which is less than the price of a loaf of bread. After graduating from WfWI's program, women share their daily income is five times higher. The empowerment is not just economic. WfWI graduates also gain confidence to influence family and community-level decision-making. 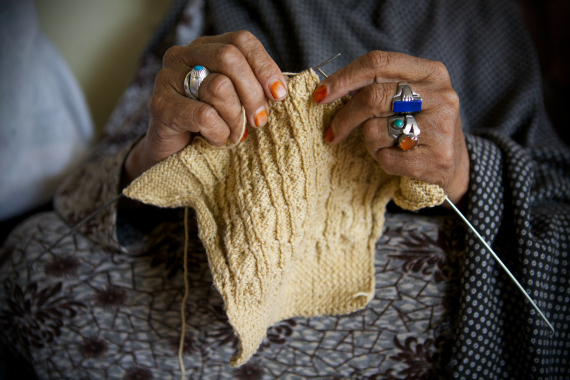 In the months after the program, Fatima says she has seen her family dynamics transform. Even though she still encounters obstacles at home, male family members are more likely to listen to and solicit her opinion. Recently, her husband and his family were considering starting a new business. After Fatima pointed out that selling soap would be a steady source of income, they followed her advice. The result: the family now owns a small but successful soap business.

Economic self-reliance is enabling women like Fatima to rebuild their lives. It is not only families that benefit. Increasing women's participation in local economies fosters stability and improves life for everyone. Yet a World Bank report found that in Afghanistan, women face more than 20 legal differences that prevent them from having the same rights and opportunities as men and affect their economic well-being. Afghanistan is among the poorest countries in the world and ranks as one of the hardest countries to be a woman. For the nation to progress and for gender equality to become a realistic goal, prioritizing the economic empowerment of the most marginalized is essential. Despite the decades of war and ongoing instability, we must focus our efforts on scaling resources to reach more women like Fatima.