This essay is an excerpt from the recently published anthology, "The Maternal Is Political," by Shari MacDonald Strong.

In May of 1999 I flew from Budapest into Tirana, the
desiccated capital of Albania. 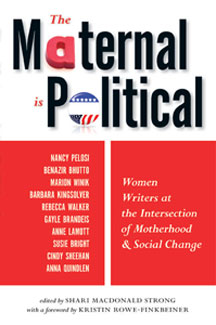 I had come to this city at the edge of
the Adriatic to follow a group of American doctors and nurses as they
journeyed to the refugee camps. That I was intensely drawn to the
regional politics of the Balkans, that I was deeply disturbed by the
images of ethnic cleansing I had seen on the evening news, was also why
I had come to Albania.

Since early that spring, some 800,000 ethnic Albanians
had been driven from Kosovo by the late Yugoslav President Slobodan
Milosevic in a campaign to rid the province of its Albanian majority.
Most of Kosovo's Albanians had fled over the mountains into Macedonia
and Albania. Of those thousands were doctors and nurses who'd been
stripped of their medical licenses and jobs during the Serbian
crackdown.


Some in Albania had found work with International
Medical Corps, a relief agency providing medical care in the region.
Each morning the Americans, Kosovars and a handful of local Albanian
health-care workers would fan out to the refugee camps, returning to
Tirana before dusk. Tirana was under curfew and there were reports of
women being kidnapped and raped right off the street. There were
reports that the Italian mob, or the Albanian mob, I was never clear
which, was in control of Tirana after dark.


You did not want to be out after dark.


Albania was not my first time in a war zone. I had been
to Nicaragua in the early 1980s, had seen bombings and met campesinos
who'd had their crops burned, had spoken with Sandinistas who'd been
tortured by the National Guard. As a reporter I thought I was somewhat
immune to such violence, but I failed to take into account certain
things. When I went to Albania I was no longer a single woman in her
late twenties.

I was the mother of two young children.


The lens of motherhood filtered everything I witnessed,
from the gypsy children who pursued us in the dirty streets of Tirana
begging for leks to the two-year-old boy at a camp in a grim former
veterinary clinic in the countryside. The boy was dressed in a pair of
overalls with hearts and bunnies embroidered on them and was sitting on
his grandfather's lap. The boy had a ragged cough, and as an Albanian
doctor listened to his lungs his grandfather tenderly stroked his head.
The elderly man was the child's only relative. His mother was missing,
maybe dead. No one seemed to know.


My job as a reporter was to take down such stories, to be
detached. But that morning as I watched the boy and his grandfather I
thought of my 9-year-old son and had to look away because my eyes were
wet.


In camp after camp, the stories ethnic Albanians told me
were chillingly the same. Serbian paramilitary bursting in the door and
demanding money and giving them only minutes to get out. Boys and men
being dragged off while their female relatives begged for their lives.
Mothers whose teenage sons had been shot.

"I growed the boy and they killed him," one such grieving
mother said through my Kosovar translator.


We were sitting in the shade of a scrub pine at a shelter
for 400 refugees. NATO troops were now in force in Albania and as we
talked, two American-made Hueys rumbled overhead, causing the children
near us to startle and look up to the sky. A sign of war trauma. A thin
old man in a beret hobbled by on crutches, his foot bandaged, the
result of a grenade attack that killed his daughter and son.


Like dozens of the Albanian refugees I met, the mother I was
interviewing had a son in the Kosovo Liberation Army, or KLA, the rebel
group fighting for Kosovo's independence. She had no idea if he was
alive and was taking Valium for depression, a common opiate in the
camps since anti-depressants weren't available. As we talked dozens of
women crowded around, occasionally interrupting to help my translator.


It was clear they wanted me to understand exactly what had
happened.

Writer and Journalist focusing on politics and parenting