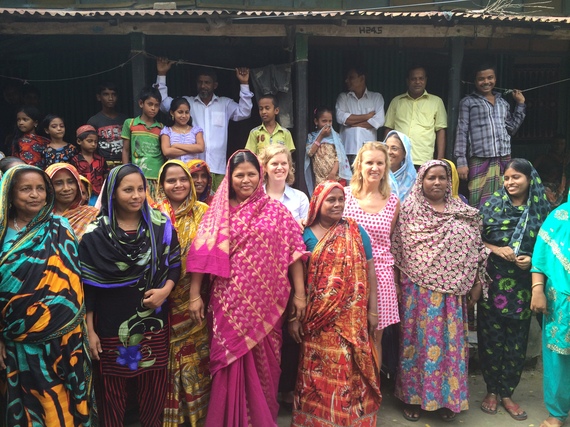 Last week, at the invitation of my friend Muhammad Yunus, I traveled to Bangladesh, a truly humbling and inspiring experience. I met so many incredible people struggling to improve their country and their lives. I wrote a letter to my daughters about my travels, which follows:

Visiting Bangladesh has been a lifelong dream of mine, but all that I had heard about a people who love freedom so much that they have withstood great armies, famine and intractable poverty could not prepare me for what I've seen in the last three days.

The Bengali patriots' courage and endurance in the face of the Pakistani army forty years ago is the stuff of legend in our family. I remember your Great Uncle Teddy telling us about his visit to the Calcutta refugee camps, where tens of thousands lived not in tents but in sewer pipes. The people in these camps had fled the mass killings -- some would say genocide -- that the United States had failed to stop, as the Nixon Administration's official policy was to choose our relationship with Pakistan over those who shared our love of freedom. Great Uncle Teddy promised to return when the country gained independence, and a few months later, he and Uncle Joe were among the first international visitors to the newborn country of Bangladesh.

Given what I'd heard from Uncle Teddy, I suppose I should not have been surprised by the inspiring people that my colleague Lydia Allen and I met in Bangladesh, people who endure extreme hardship for the freedom that they love and that they demand for their country.

In a small wooden room packed with women in bright saris, we met a proud shareholder of the Grameen Bank -- the transformative microlending institution founded by Nobel Peace Prize laureate Muhammad Yunus -- who borrowed 5,000 taka (about $80) and bought a rickshaw, and then 20,000 taka ($240) and bought a cow, and then 30,000 taka ($480) and bought land. Thanks to her hard work and the Grameen Bank, she now has a house full of furniture, a field full of food, water, a working toilet, and a television set. She saves 100 taka per month, and this year she will receive 100,000 taka ($750) from her savings.

We met a store owner and her husband, who borrowed from Grameen to buy solar panels, which have allowed them to expand their storefront and provide light to the brick house they share with three siblings and their in-laws.

We met a young woman on a Grameen scholarship who will be the first woman in her family to go to college. She is majoring in computer science and plans to start a business in the IT sector that will transform her neighborhood.

We met ten women who sit on the board of the Grameen Bank, borrowers all. They're angry at the government and concerned for the future of the bank. The government recently ousted Dr. Yunus from the board of his own bank on the pretense that he had overstayed the mandatory retirement age of sixty. Then, finding no other legal way to do so, the government cajoled the rubber-stamp Parliament to change a banking law for the specific purpose of ousting the impoverished women from the Grameen board and replacing them with ruling party toadies, who, the women fear, will transform the multibillion-dollar bank that has helped so many escape poverty into just another slush fund for kleptocrats to draw upon.

We met a dozen women, many of them lawyers, all of them leaders of NGOs that address pressing issues like indigenous rights, due process of law, violence against women, dowry battles, rape, and environmental justice. Many have been arrested, and many live under daily threat. One said her husband had been "disappeared" in apparent retaliation for her work. They are scared of the nation's security forces, which are known for kidnappings, torture and extrajudicial executions. And yet they wake up in the morning, kiss their children and their husbands, and return to work, a daily show of quiet courage.

We met a woman who worked at the collapsed Rana Plaza sweatshop who said she never wants to work in the apparel industry again. I met another who said the same thing, but added, "But we are poor, and we must work."

They were among a crowd lining the hallway and sitting at intake tables at the offices of the Rana Plaza Claims Administration, the nonprofit group charged with addressing reparations for the victims of the Rana Plaza collapse. It is an impressive operation, manned by a team of dedicated professionals in labor, law and computer science, intent on making payouts to every single victim for physical and psychological injuries and to the scores of dependents who lost the family breadwinner in the tragedy. They have $17 million to hand out, and calculate the need will be closer to $40 million, but the fund is voluntary and no law compels the brands to pay their fair share. While some have been generous, too many others have refused to participate, because no law compels them to do so.

We met U.S. Ambassador Dan Mozena, a man singularly committed to advancing U.S. interests abroad by protecting basic rights and increasing the prosperity of the people of Bangladesh. He invited me to visit the Edward M. Kennedy Center and the Ted Cafe, a gathering place created by the embassy for NGOs to meet and speak in safety, and for young people to learn about our country.

Michaela, the book shelf of one entire room was jammed with SAT prep books, looking all too familiar. Thanks to Ambassador Mozena, you will have plenty of competition from young Bangladeshis as you apply for college, determined to gain an education at U.S. schools, and return to their homeland with new hope for the future.

We met Adil Rahman Khan, who has organized a team of 400-plus human rights monitors and defenders across the country to investigate and report on violations of voting rights; on crackdowns on free speech and assembly; and on torture, extrajudicial execution, disappearances, and more--holding the government accountable for its failures to protect the freedom that the Bangladeshi people won at such great cost 40 years ago. Adil seeks accountability in a country where 197 anti-corruption officers are presently under investigation for corruption themselves. For his actions, Adil lives under a constant threat of death. Last year, after issuing a report documenting a massacre by government forces of 61 protestors, he was taken away and held without trial for 62 days in a filthy cell, ridden with bedbugs and rotten food.

How proud Uncle Teddy would be to know that this man, who personifies all the values that Teddy and Grandpa Bobby so admired, will receive the Robert F. Kennedy Human Rights Award later this year.

And, of course, we met with my dear friend Dr. Yunus. He invited us to come to Dhaka for Social Business Day, where people from scores of countries across the globe gathered to share their designs and experiences with creating businesses which seek not profits for shareholders but solutions to problems like housing or food access.

You were still in diapers when Dr. Yunus came to our home nearly 15 years ago and I interviewed him for my book Speak Truth to Power. I have always been struck by the sense of peace and joy he conveys in the many lectures I have since seen him deliver. But I never appreciated how incredible that was until I saw him in Bangladesh. He is under unremitting pressure from a government that seeks to destroy all he has given his life to build. And yet he endures, and invites us to somehow find peace amidst the chaos in our lives and find our joy through service. His steady bearing reminded me of these lines from Rudyard Kipling's poem "If":

"If you can bear to hear the truth you've spoken
Twisted by knaves to make a trap for fools,
If you can watch the things you gave your life for, broken,
And stoop and build 'em up with worn-out tools...

If you can talk with crowds and keep your virtue,
Or walk with Kings -- nor lose the common touch...

If you can fill the unforgiving minute
With sixty seconds' worth of distance run,
Yours is the Earth and everything that's in it..."

By this measure, Dr. Yunus has achieved the world.

What an amazing place, what an amazing country. As we in America celebrate our own Independence Day this week, I hope we can take inspiration from the people of Bangladesh and rededicate ourselves to democracy and freedom, knowing that the price may be high, but the sacrifice is well worthwhile.