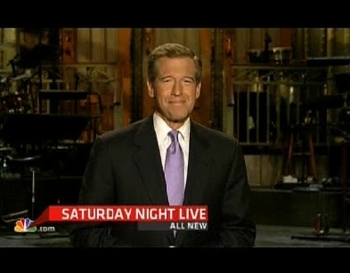 Good Lord, Brian Williams is everywhere these days, pre-SNL — talking to the NYDN about how he won't be singing "Dick In A Box"; admitting butterflies to the AP; declaring to the Hollywood Reporter that the show must go on; telling New York's Daily Intel about his Ambien habit; and giving a carefully-calibrated sneak peek into the show via an official NBC story and video (way more revealing than the paltry little teaser at the NBC News site, by the way. BriWi plays a fireman! And does accents!). Today, he gets twin features in the NYT and WaPo about this historic moment in network news and late-night variety shows. SNL — and the NBC Nightly News — will never be the same again.

WHOA! Hold up there! That is exactly the narrative that BriWi is fighting against. All those dark naysayers wringing their hands about what this might mean for the future of journalism (yawn); the gravitas-mongerers fretting that it's not dignified for the dude to god forbid crack a smile — people who can tell the difference between what airs at 6:30 and what airs at 11:30 may think that's ridiculous (hi!) but let's face it, those have been the rumblings since the surprise hosting gig was announced (see Howie Kurtz's subhed today: "Brian Williams Puts His Gravitas on the Line to Host Tonight's 'Saturday Night Live'"). Perhaps that's why Williams — in what has to be the busiest week of his life in between anchoring the news, prepping for and moderating the Dem debate in Philadelphia, and hosting SNL for the very first time — has made time for what seems like a zillion and a half interviews: So he can get lines out there like, "People are certainly smart enough to understand what I do for a living, and what SNL is...there's a very bright line between them" and "No one should worry my stewardship of journalism at NBC is any different" and "No one will declare that the death of journalism will date to this night in 2007."

Advertisement
But! Why should Williams cross his fingers and hope his message takes with reporters when he can get it out there himself? He's a
blogger
, dammit, no man speaks for him! So he did precisely that this week with The Daily Nightly, with three posts this week setting out his SNL Mission Statement, replete with assurances of gravitas and examples of other "serious" people flexing their funnymuscles, of which he is merely the latest in a long line. Observe:
Advertisement

Well, it's within his right to doth protest too much, given the avalanche of ink that has resulted from this event. (And yes, Katie Couric WOULD be flayed for it if she were to host. But that's another post.) But Wiliams could have saved himself a lot of blogging if he'd just thought to invoke the most towering and inviolate broadcast news icon of them all: Walter Cronkite. That would be Walter Cronkite, former "CBS Evening News" anchor...and Walter Cronkite, guest-star on "The Mary Tyler Moore Show." If a legend like that can withstand a gravitas-stretching move like that, then surely Williams can sing "Dick In A Box' with impunity. After all, we're having this conversation AFTER he burped the "Battle Hymn of the Republic" at a black-tie dinner. AFTER. So I think the news business is safe.

Related:
NBC Anchor Feeling Skit-ish [WaPo]
Live From New York, It's Not Quite the News! [NYT]

For those of you who can't wait, here's a teaser vid of Williams rehearsing with Seth Meyers and Amy Poehler for last year's cameo: