On a bright Boston morning, 16 people of varying gender, age, nationality, and ethnicity gathered around a piano to hear Emily Townsend play one note over and over.
Townsend teaches piano tuning at one of only two schools in North America where you can learn the craft, North Bennet Street School (NBSS), which also happens to be America's oldest vocational school.
At NBSS, you can learn to make jewelry and violins, you can learn carpentry, and you can learn half a dozen other livelihoods.
But for these 16 students, piano tuning was the attraction, and they will spend the next one to two years perfecting their new craft.
"Piano technicians are in short supply all over the world," Townsend explained. "A good one can make $60,000 to more than $100,000 a year. You can either tune Mrs. Jones's piano at her home, or get a job tuning pianos at universities and music schools. There's no limit."
Why would you want to become a piano technician, anyway?
"The work can be repetitive," Townsend admits, "but no two pianos are alike. Beyond that, there's simply the deep pleasure of doing something well."
Every time you hit a key on a piano, a series of transfers of energy within the instrument results in a hammer hitting three strings.
You need three strings in order to have the volume of sound necessary for your playing to reach the back of the concert hall.
The notes at the bottom of the piano only take one or two, but the ones where most pianists operate most of the time, from a 10-year-old taking lessons to a celebrity pianist in Carnegie Hall, take three.
Which means that tuning a piano entails getting the three strings of one note to precisely the same pitch.
"Think of the sound that the note makes like a West Texas country road," Townsend told the students at the first morning of aural training.
"The road just goes on straight, forever. It doesn't go up and down. Just straight."
A poorly tuned piano key sounds a little like a cat's meow--more of a hilly road than a straight state highway.
Townsend herself knew from the time she was in fifth grade that she wanted to tune pianos for her livelihood.
Her friends, who knew better about life, cautioned her against such a presumably ill-paying career. It wasn't until she left Nebraska and got to college in San Antonio--hence the reference to West Texas highways--before she realized that piano tuning really was actually her true calling.
Townsend herself took the two-year program at NBSS, which includes a year of learning to tune and a year of learning to rebuild full-sized pianos.
Now she teaches, and she loves it.
"I think I have the best job in the world," she confides.
The School's building takes up what used to be a City of Boston printing office, where all your parking tickets came from, and a Boston Police station, which is presumably when you were taken for failure to pay those tickets.
NBSS students range ion age from 18 to 70, with many middle-aged career changers in the mix.
Ages in the current class of piano technicians range from straight out of high school to early middle age.
I tried my hand at piano tuning, working with a $275, made-in-Arkansas tuning tool composed of hand turned maple and the same type of carbon fiber used in high-end bicycles.
"We don't encourage our students to buy tuning tools before they get here," Townsend says. "There are dozens to choose from. By the end of the first year, they'll know what they like."
According to Townsend, I didn't do very well, and my two strings were more like a meow than a perfect unison.
"I don't hear anything wrong," a woman student in her mid-twenties said cautiously as Townsend complained that her own handiwork at the piano wasn't quite up to snuff.
"You will in a week," Townsend assured her.
The School will hold its annual Open House on November 18th and 19th, allowing those dissatisfied with their current careers and dreaming of a lifetime tuning four to six pianos a day, making up to six violins a year, making jewelry, becoming a carpenter, or finding some other vocational path, a chance to explore.
There's also Continuing Education, for those not ready to make the leap.
But for Townsend, the rest of the program is immaterial. She just loves pianos.
"No two pianos are the same," Townsend says, "and no piano is perfect. So the challenge a piano tuner faces to get things perfect is never ending."

Your humble if tuneless correspondent, urged not to give up his day job: 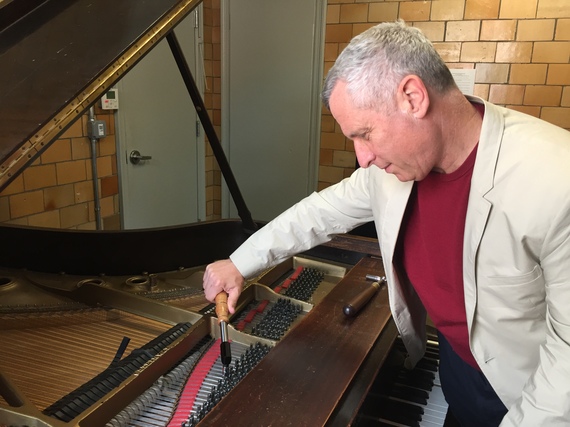