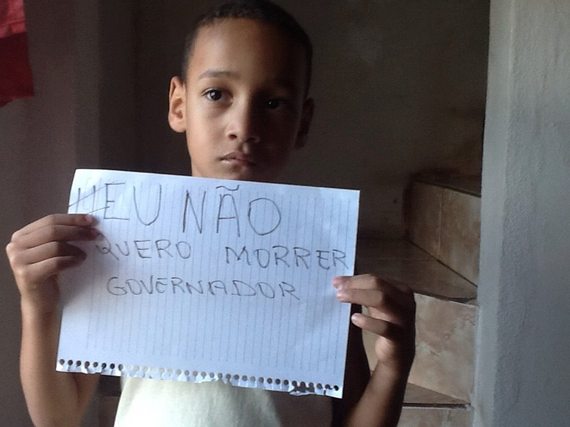 A young man holds up a sign saying "I do not want to die, Governor" (Alemão Morro/Facebook)

The day before Easter started with killings in Rio de Janeiro. Five inhabitants were killed in the Complexo do Alemão, a slum in the northern part of the city. Among these, four of them lost their lives in a police anti-drug raid. This is just a part of the ongoing, and sometimes lethal, confrontations between cops and criminals within the favelas (slums) of Rio de Janeiro -- actions that are far more likely to effect young black men.

One of the victims, Eduardo de Jesus, was only 10 years old and was sitting in front of his house, waiting for his sister to get back from work, when he was shot to death. Witnesses stated that the shot came from a police officer. During an interview with Brazil's Portal G1 News, Eduardo's mother mentioned she was threatened by the police officer after demanding an explanation from him about what happened:

I remember his face. I will never forget the face of the cop that ruined my life. When I approached him, he pointed the gun at me. I said, 'You can kill me, because you already ruined my life.'

We cannot continue to allow citizens to be killed every day in cold blood because we consider confrontations between cops and criminals in the favelas it to be "natural." How many more have to die? Hasn't it become clear by now that the politics of war and confrontation are inefficient? For the governor of Rio de Janeiro, Luiz Fernando Pezão, it looks like it hasn't:

"Our security efforts are going to keep facing down criminality. And if necessary, the State will continue to sacrifice itself in order to realize this goal. We will not back down because of the criminal's cowardice," the governor stated last week.

On April 3, the state government of Rio spoke about a potential military occupation of the Complexo do Alemão favelas, part of Brazil's ambitious plan to "clean up" the favelas before hosting the 2016 Olympics. The State is acting frivolously and despotically in insisting on maintaining its security efforts in the favelas, which risks innocent people's lives and disrupts their daily routines.

Unfortunately there are some people who, without any empathy, approve violent raids in historically impoverished areas, contributing to the devaluing of black and poor people's lives. In these Brazilian favelas, because people have been exposed to criminality since their childhood, they are already considered criminals by the larger population even if they haven't committed any crimes. But who cares? Some people believe that further police violence will, against all precedent, lower the criminality rate.

A police investigation has been set up in order to investigate Eduardo de Jesus' death. The guns from the police officers have been collected by the civil police, and the homicide division will be responsible for the resolution of the crime. However, tragic events, like Eduardo's death, are frequently marked by utter impunity, and the population no longer believes in fair investigation.

An example is the case of Claudia da Silva Ferreira, age 38, who was dragged to death behind a police vehicle after being shot in a confrontation in the Morro da Congonha, in Madureira. It has been one year since the cruel act, and the six cops who were involved in the shooting and in the transportation of the corpse haven't been judged in trial nor expelled from the police. They are still scot free.

According to the Brazilian Forum on Public Safety, the number of citizens who were murdered by police officers in Rio de Janeiro increased 30 percent in 2014. It also showed that, between 2009 and 2013, over 11,000 people were killed by public agents throughout the country, with an emphasis on the police actions in Rio, whose police appear to be the most lethal in Brazil. I am sorry, Claudia and Eduardo and anyone like you -- even though your cases might end up on the news, they won't change a thing. 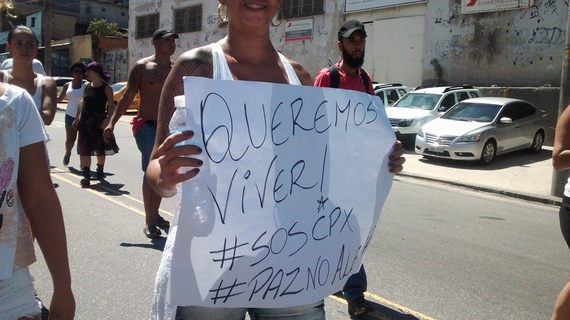 "We Want To Live" (Alemão Morro/Facebook)