Below is an excerpt from my book, East Eats West: Writing in Two Hemispheres, published in 2010. Sadness and joy and yearnings and stories of broken hearts all found expression through this interactive entertainment contraption, For many Vietnamese it's a godsend.


SAN FRANCISCO--On the recent occasion of my uncle's birthday, my clan gathered from all over the country to celebrate. Instead of gifts, however, he had an unusual birthday wish: Everyone was asked to pick and sing a song on the karaoke.

What began as an amusing exercise in merriment turned quickly into something I can only now describe as our first and only session in family group therapy.

When it comes to matters close to the heart, my family is notoriously inexpressive. Something within our taciturn culture discourages verbal intimacy. Immigrants and refugees from Vietnam, we rarely ever communicate to one another what we really feel, and our losses and sorrows we often digest differently and alone.

My uncle, who was going through a painful divorce, had not been able to convey to the family his profound sadness. He was still in love with his wife, but, haunted by memories of the war in which he took part and prone to bouts of rage and mania, she had had it with him. He masked this with jokes, and once said while drunk, "Vietnamese men don't cry outward. Our tears flow inward, back into the heart."

But at the birthday bash we all discovered that what we could not talk about, some of us could at least sing out loud.

Thus the cousin whose wife took off and left him high and dry sang "Delilah" with a heartbreaking voice. And we managed to tell him that we were sorry for his troubles by signing along with every refrain, "Why, why, why Delilah? My, my, my Delilah!"

Another aunt, who was now in declining health, took the mike to sing the theme song from Doctor Zhivago, dedicating it to the rest of us. "Till then, my sweet, think of me now and then," she sang in a hoarse whisper and out of tune. "God, speed my love, 'til you are mine again." A few of us cried quiet tears as we listened to that thin and frail woman sing gamely on. 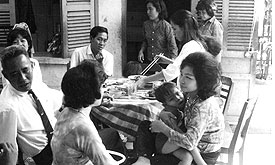 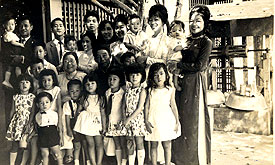 After a few more singers, it was Uncle's turn. He chose a well-known Vietnamese song titled, "Come What May, I Will Always Love You." His was a beautiful voice, but halfway through, as he looked at his three grown children, he choked. Another aunt, his closest sister and confidante, quickly grabbed his mike, put her hand on his shoulder and finished the song. Meanwhile, my uncle's tears were flowing outward, finally, in front of his entire clan.

That afternoon I watched and listened in amazement as my relatives laid bare their hearts before me. It was as if words when sung or turned poetic become acceptable and even welcomed in an Asian immigrant culture, where love and resentment often flow subterraneously.

As I witnessed their sadness, memories of moments with my own immediate family rushed up before me.

I saw again how timidly my father tried to hold my mother's hand in front of us one evening, and how she, embarrassed, pulled her hand from his grasp and failed to see the subsequent hurt look on his face.

I saw again my long dead grandmother late one night tiptoeing into the living room to put an envelope between the pages of my older brother's math book. He had been trying to save enough money to buy a used car so he could drive to college. On the envelope in which she put half of her social security income, she wrote succinctly: "Noi cho con" (For my grandson).

And I saw myself stuttering that evening long ago, a few years after college, unable to form Vietnamese words when my mother asked, "What's wrong?" Everything was wrong, I had wanted to tell her. The love of my life had left and I was bleeding inside. But that was not our way, and my Vietnamese is unruly, refusing to give lyrics to the murmurs and pangs of the heart. All I managed to say was, "Nothing, mom, I'm just tired." 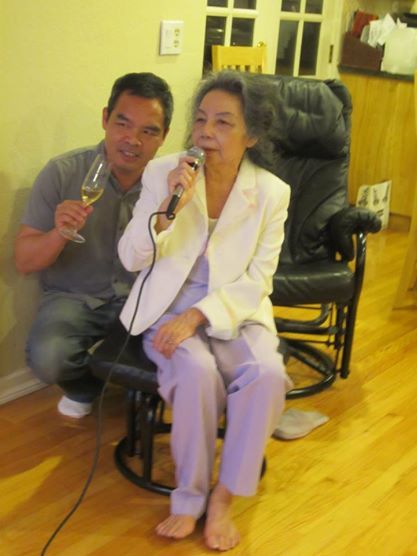 The author and his mother singing on her 80th birthday.

"Hugging, kissing, some loving words should be simple but in my parents' world they don't exist," complains a Chinese American friend whose parents came from Shanghai. "I don't think my parents ever said 'I love you,'" noted another whose parents come from Taipei. Affection, he observes, comes in strange ways within his family. "They might say vaguely: 'how can parents not love their children?' as an indirect way to express love, but to say 'I love you' is jut too difficult."

If emotional restraint is still considered the utmost beauty in some Confucian mindsets, and endurance without complaints a virtue, these ideals, when practiced blindly, fail many of us who now live in the complex, modern world called the West. "Show, don't tell" is our millennia-old ethos. But despite my mother's subtle way of saying "I love you" in the impeccable dishes she serves whenever I visit, the lack of verbal communication leaves me wanting.

What song did I sing at my Uncle's birthday party? I sang many. Songs about broken hearts, about lost innocence. But the one I dedicated to my entire clan was Carol King's "You've Got a Friend."

You know the lyrics: "When you're down and troubled and you need a helping hand, and nothing, nothing is going right. Close your eyes and think of me. And soon I will be there." It was the sentiment I felt, and in front of my family I, too, sang my heart out.

More:
communicationhealthy livingConfucianismdivorceChildren
Newsletter Sign Up
The essential guide to taking care of your mind and body
Subscribe to HuffPost’s wellness email
Successfully Subscribed!
Wellness delivered to your inbox