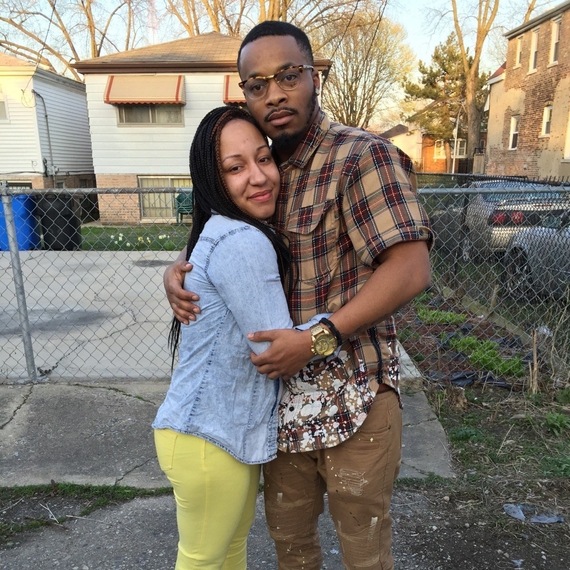 The violence in Chicago has reached a critical level, and holiday weekends like Memorial Day tend to be particularly deadly. As of Sunday morning, May 30th, four people had been killed and thirty-six wounded since the holiday weekend began. People all over the city are afraid to leave their homes, not knowing if they'll be shot walking down the street or driving to the store. Sadly, the couple pictured above has been torn apart by the violence this year.

This is Ashley Harrison and Garvin Whitmore. Ashley and Garvin are native Chicagoans who moved from Chicago to Aurora four years ago to escape the rampant violence of the inner city. Garvin got a job at a factory in Batvia, IL., and Ashley stayed home to raise their two children. On Saturday, May 28th, around 5pm, Ashley and Garvin were on the west side of Chicago, preparing to pick up Ashley's aunt so they could spend time with the family for Memorial Day weekend. They never made it. Someone ran up to the car and shot Garvin. Ashley grabbed a gun and fired warning shots into the air to scare the assailant away. Then, she dropped the gun and held her dying fiancé until police and paramedics arrived. Surveillance cameras on a nearby business recorded the incident.

This situation hits home for me for a couple of reasons. First and foremost, Garvin was a classmate and friend for well over a decade. The last time I saw him, the night before his untimely death, he was smiling and having a great time with family and friends. Secondly, I can empathize with Ashley. Witnessing someone shoot your fiancé is obviously a traumatic experience. I imagine if I were Ashley, I would want to scare the assailant away as well so they wouldn't harm me and take both of my kids' parents away. Ashley probably thought she was doing the safest and smartest thing by shooting into the air instead of shooting at the attacker and potentially harming others.

Unfortunately, the State's Attorney's office did not agree. Ashley is currently being held on $250,000 bond charged with reckless discharge of a firearm and aggravated unlawful use of a weapon. Instead of comforting her children, mourning with her family, and making arrangements for Garvin, Ashley is in the county jail. I don't know which is worse: witnessing your fiancé and the father of your children be killed or being arrested and charged for defending yourself while his killer goes free.

Ashley's family has set up a GoFundMe page to raise money for Ashley's defense. To learn more, click here:https://www.gofundme.com/2727ky44.

UPDATE: Ashley Harrison has been released on house arrest and will be under 24 hour surveillance. This means there is a very real chance that she will not be able to attend the funeral services of her fiancé, Garvin. She will return to court Friday, June 3rd.