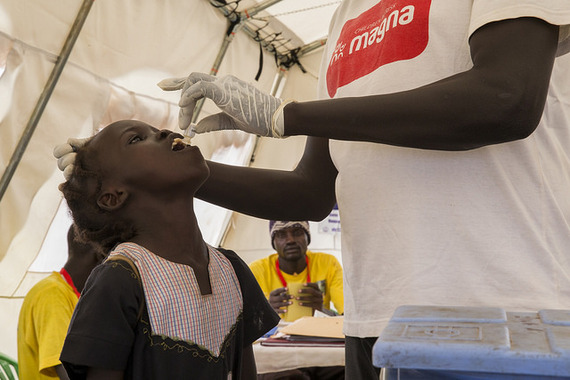 Oral cholera vaccines are typically administered in two doses, but experience and recent research reveal this may not always be the best approach. Faced with an outbreak in South Sudan, epidemiologist Andrew Azman and his colleagues encountered a difficult decision: vaccinate as many people as possible with a single dose, or fewer with the standard two. Based on emerging research, they chose the first option and found that for the kind of short-term protection needed to stop an outbreak, a single dose works as well.

ResearchGate: How long has this vaccine been in use?

Andrew Azman: Injectable cholera vaccines were abandoned decades ago, because they didn't work very well and caused adverse reactions. In the 1980s, the research community started developing oral vaccines, which work better. Cholera is an enteric disease, so stimulating a response in the gut is going to be the most effective way of tackling it. Researchers in Sweden, the US, and Bangladesh developed the first version of the oral vaccine. It works very well, but is quite expensive and requires a buffer solution, which means you need clean water with every dose you give. For both these reasons, it's not well suited for large-scale humanitarian vaccination campaigns, though it's been used in travelers for decades.

In the 1990s, a similar vaccine without the component requiring the buffer solution was developed in Vietnam. The manufacturer didn't have all the certifications needed for international licensure, so it was initially used only domestically. But it worked very well--the incidence of cholera in Vietnam dropped drastically--and around 2009 the technology was transferred to an Indian manufacturer, where they started Phase III clinical trials. After the trial, the vaccine was licensed in India and received prequalification from the World Health Organization, allowing UN Agencies to procure the vaccine. Around the same time, Médecins Sans Frontières demonstrated the importance of this vaccine by successfully using it in response to an outbreak in Guinea.

In 2012, an emergency stockpile of this newer, highly effective oral vaccine was setup to ensure availability of the vaccine for emergencies. Since then, there have been a number of emergency requests from the stockpile, including the one we describe in the paper. They've also expanded it to include a non-emergency hotspot stockpile for places like Eastern Democratic Republic of Congo and Mozambique.

Still, supplies are limited. There are a few billion people at risk of cholera. In 2015, only 4-5 million doses were produced. With a two-dose vaccine, that means you can cover only a few million people a year.

Azman: It's a two-dose vaccine primarily because the initial clinical trials looked at two and three doses and found that two doses worked just as well as three. It's a tragedy of expensive clinical trials that you often end up stuck with the study design of the initial trial for licensure.

In those initial studies, they used a duration of 2-6 weeks between doses, eventually narrowing that down to 14- or 21-day interval, which is easiest to implement. Recently, there've been a number of papers showing that the second dose at 14 days doesn't seem to do very much, and that it would probably be better to administer it much later. 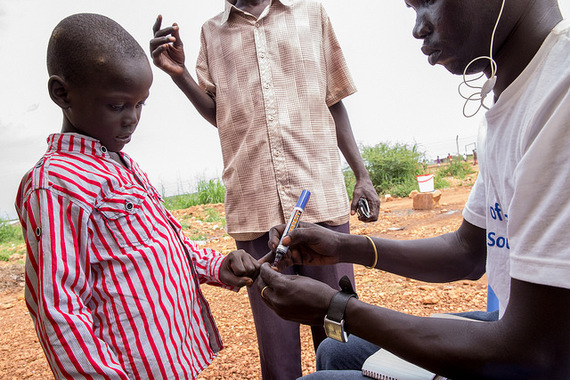 A boy's finger is marked to indicate that he's been vaccinated against cholera at a UN Protection of Civilians site in South Sudan. Credit: UNMISS

RG: What led you to look at the effectiveness of single doses?

Azman: The case centers around an outbreak in South Sudan, where cholera is fairly endemic. In 2014, there was a big epidemic of 5000-6000 cases that coincided with a massive displacement of people, most of whom stayed within the country in camps. The Ministry of Health did preemptive vaccination in those camps, but excluded the surrounding community, including Juba, which is at high risk because of population density and poor water and sanitation conditions. So when there was another outbreak in 2015, many people in Juba were unprotected.

The first cases were detected in early May, and then it took about a month to confirm the outbreak. It took two more weeks to make a request to the stockpile. By that time, there were 60 cases a day or so coming into clinics just in Juba. Vaccinations started in late July. There were an estimated 600,000 to a million people in Juba, and there were only 800,000 to 900,000 doses available globally. That's what made us consider trying a single dose, which had never been done before. It took a long time to deliberate with the Ministry of Health about what the best option was. Some modelling work my research group did in 2015 showed that when the supply is limited, vaccinating more people with even a weaker vaccine could ultimately reduce infection rates and mortality. That, combined with preliminary evidence from a clinical trial, led us to decide that taking a more population-based approach made the most sense given the limited vaccine availability. In the end, we got around 250,000 doses and tried to cover as many people as possible as quickly as possible rather than giving two doses over two weeks to only a select group.

RG: And how effective did you find the single dose to be?

Azman: It was highly effective, actually quite similar to two doses' effectiveness as measured in similar settings, with an adjusted vaccine effectiveness of 87 percent. However, that's only looking at a duration of two months. One of the biggest outstanding questions is how long the protection lasts after a single dose. But over the short term, it looks like one dose protects similarly to two doses. As many outbreaks are quite quick--on a scale of months--it seems that using a single dose as an outbreak tool could be a very smart approach.

RG: Is the ability to stretch limited supplies the only advantage to being able to administer a single dose instead of two, or are there other benefits?

Azman: Limited supplies created the circumstances in which we had to use the vaccine as a single-dose regimen, but there are other advantages. In humanitarian emergencies, delivering two doses separated by any amount of time is quite complex. Often you have access to populations for only a very short window. In work with Médecins Sans Frontières, there are often tricky security situations where you have a few days to get in and out. The ideal given the evidence now would be to fully vaccinate everyone, but if you can't reach them twice, providing at a minimum partial protection is great.

There are also significant costs and resources involved in keeping vaccination teams on-site during the period between doses. Storing the vaccines, which have to be kept cool, is also a challenge. In Juba, we had a container refrigerator that we brought in from Uganda. It's quite expensive to keep that going and to keep all of the vaccines in there. 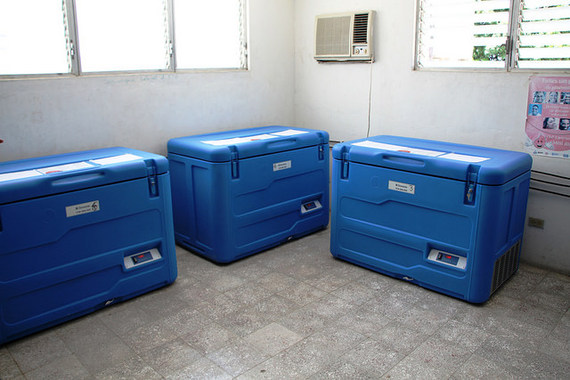 RG: Are there other areas where single-doses could be tried?

Azman: Yes, October's hurricane brought a surge of cholera cases in Haiti. The stockpile only had just over a million doses available, which quite a large deployment, the largest in its history. They gave nearly all the vaccines to Haiti, where there's a huge population at risk. That raised the same question we had: do they vaccinate 400,000 people with two doses, or do they vaccinate 800,000 people with single doses? Based on our work in Juba and the results of a randomized clinical trial from Bangladesh, they ultimately decided to vaccinate 800,000 people, to use one dose and try to cover as many people as possible. But it's definitely not an easy decision. There are some people that are very opposed to it. Over the next year, as more vaccine becomes available, they will provide the second dose, to ensure long-lasting protection

While Haiti's the headline-catcher, we've also used this approach in Zambia, where there also wasn't enough vaccine and we needed to act quickly to vaccinate a large number of people. That was previously the biggest single-dose campaign. And there are many other places this may one day be a good option as well.

RG: Why was there opposition to the single-dose approach in Haiti?

Azman: There's a lot of evidence to support the efficacy and effectiveness of two doses. The single-dose approach is something that is at best equal, but perhaps inferior to the standard, licensed regimen. We still need a lot more evidence, particularly on the duration of effectiveness, to fully understand when it's best to use the single-dose regimen. As Haiti has had cholera non-stop for six years, it's a place where the long-term protection is needed, and most experts believe two doses the best way to provide that. 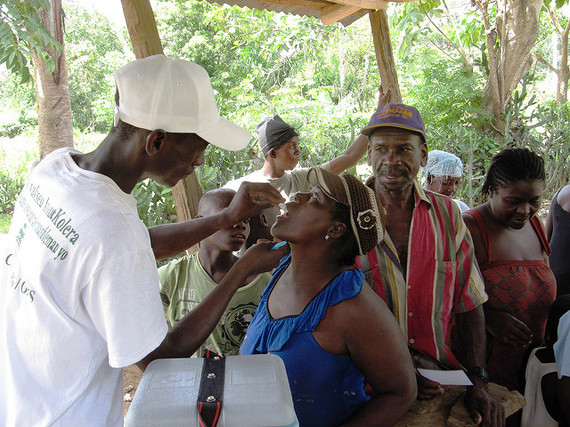 RG: Do you see any broader implications from your findings in South Sudan?

Azman: I'd say the experience really shows the importance of being able to adapt off-label use of vaccines or therapeutics in emergencies. It highlights the need for a broader discussion that's starting to take place--Ebola and yellow fever for instance have also raised the issue of how to move regulation quickly to adapt to circumstances, and this is another example of that. We don't always have perfect information, but when we know something is safe or believe something is safe or more effective, we should have an ethical framework in place for making the right decisions.