NASHVILLE, Tenn. (RNS) Fans of a beloved contemporary Christian hymn won’t get any satisfaction in a new church hymnal.

The committee putting together a new hymnal for the Presbyterian Church (USA) dropped the popular hymn “In Christ Alone” because the song’s authors refused to change a phrase about the wrath of God.

The original lyrics say that “on that cross, as Jesus died, the wrath of God was satisfied.” The Presbyterian Committee on Congregational Song wanted to substitute the words, “the love of God was magnified.”

The song’s authors, Stuart Townend and Nashville resident Keith Getty, objected. So the committee voted to drop the song.

Critics say the proposed change was sparked by liberals wanting to take God’s wrath out of the hymnal. The committee says there’s plenty of wrath in the new hymnal.

Instead, the problem is the word “satisfied,” which the committee says refers to a specific view of theology that it rejects.

Debate over “In Christ Alone” is a mix of church politics, the touchy subject of updating hymn lyrics and rival views of what Jesus’ death on the cross meant.

The decision to drop the hymn wasn’t made lightly, said Mary Louise Bringle, a religion professor and hymnwriter who chaired the hymnal committee. It was complicated by a foul-up with the rights for the song.

Committee members had found a version of the hymn with the alternate text in the Celebrating Grace Hymnal, a Baptist hymnal published in 2010. They assumed the songwriters already had agreed to the change.

“We had every reason to think that this was an authorized text because it appeared in a recent hymnal,” Bringle said.

When it asked for permission to use the song, the committee learned that the song’s authors hadn’t approved the change.

Capitol CMG Publishing, which manages rights for “In Christ Alone,” said it is working with the hymnal’s publisher to fix the problem. Neither Getty nor the Celebrating Grace publisher was available for comment.

“We respect our songwriters and the integrity of their lyrics, and the intent of our request was to ensure the song retains the original lyrics as written by Keith Getty and Stuart Townend,” Capitol said in a prepared statement.

That left the committee in a bind, Bringle said. The Presbyterians’ new Glory to God hymnal, due out this fall, includes songs such as “O Sacred Head Now Wounded,” which talk about substitutionary atonement — the idea that Jesus took the place of sinners on the cross. It also includes songs about God’s wrath.

“People think that we’ve taken the wrath of God out of the hymnal,” Bringle said. “That’s not the case. It’s all over the hymnal. The issue was the word ‘satisfied.’”

That term was used by the medieval theologian Anselm, who argued that sins offended God’s honor, and someone had to die in order to satisfy his honor.

The 15-member committee rejected Anselm’s view and voted 9-6 to drop the hymn.

The Rev. Chris Joiner of First Presbyterian Church in Franklin, Tenn., agrees with that move. He said some of his church members are fans of the song and will be disappointed that it was dropped. But the words of the song don’t work, he said.

“That lyric comes close to saying that God killed Jesus,” he said. “The cross is not an instrument of God’s wrath.”

But the Rev. Scott Sauls, pastor of Christ Presbyterian Church in Nashville, disagrees. He said the word “satisfied” means that Jesus paid the whole price for sins.

“There’s no more work to be done,” said Sauls, whose congregation is part of the more conservative Presbyterian Church in America. “It is finished.”

Word about “In Christ Alone” being dropped spread slowly. Bringle wrote about it in the May issue of The Christian Century magazine, but it got little attention until it captured the attention of the blogosphere.

Timothy George, dean of Beeson Divinity School in Birmingham, Ala., criticized the committee in an online column called “No Squishy Love” at the conservative journal First Things.

George said he worries that the committee dropped the song because the idea of God’s wrath has become unpopular.

“I don’t see this as an isolated case,” he said in a phone interview. “It fits into a wider pattern of downplaying parts of Christian doctrine that are offensive.”

Other conservative bloggers such as David French of Columbia, Tenn., also criticized the committee, seeing its ruling as a sign that the committee was abandoning Christian doctrine. On Aug. 1, the committee issued a public statement defending its decision.

Bringle said the controversy proves that hymns still matter. People care about them and get upset if someone tries to change a song they love.

Harland is the director of LifeWay Worship, the music department of the Nashville-based publisher affiliated with the Southern Baptists. He said he admires the Presbyterians for paying close attention to the lyrics of hymns because songs make emotional and intellectual connections with worshippers.

So the words in a hymnal matter.

“The faith of current generations and future generations is shaped by what we say and what we sing,” he said. “That’s why you stress over every word.”

(Bob Smietana writes for USA Today and the Tennessean in Nashville, Tenn.)

PHOTO GALLERY
Stations of the Cross 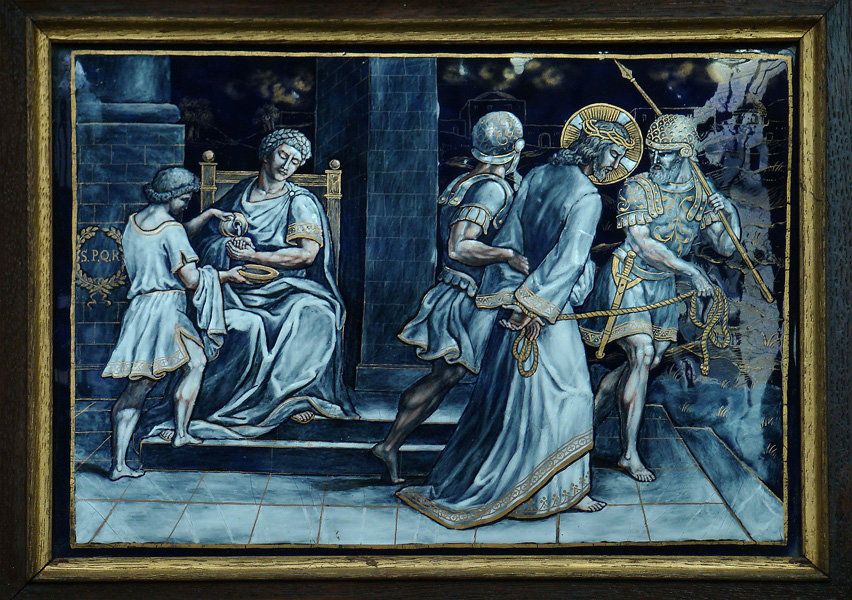