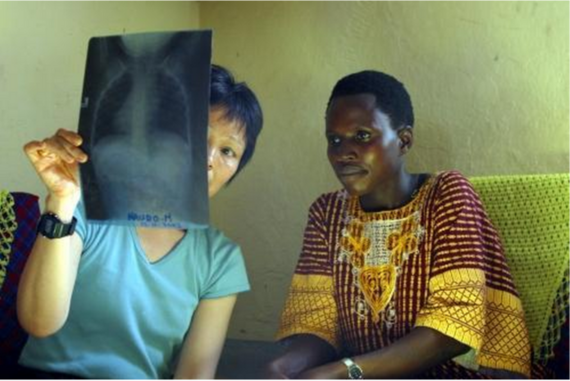 Did you know that tuberculosis claims a human life every three minutes? Or that TB has killed more people than any other infectious disease throughout the course of human history?

In January, United Nations Secretary-General Ban Ki-moon appointed Ambassador Eric Goosby as the Special Envoy for Tuberculosis. A seasoned veteran in public health, Ambassador Goosby's appointment provides an opportunity to secure a renewed focus on this deadly yet treatable disease. In anticipation of World Tuberculosis Day on March 24th, I reached out to Dr. Goosby to discuss his vision for raising the profile of TB and ensuring its prioritization on the global health agenda.

Q: You have a long and distinguished history working in HIV/AIDS. Now you're tackling tuberculosis, a disease that affects 9 million people a year and killed 1.5 million in 2013. What is it about TB that led you to accept the position of UN Special Envoy for Tuberculosis?

When I was a trainee at San Francisco General Hospital (SFGH) in the early 1980s, we were the epicenter of the HIV epidemic. Initially, SFGH saw more HIV cases than anywhere else in the United States and was the first hospital to devote a whole unit to HIV. At the same time, there was a spike of tuberculosis since many people infected with HIV died of the disease. During this time I focused on treating these co-infected patients. I was infected with TB myself and had to take prophylaxis treatment. Given these experiences and my ambition to contribute to end the suffering from TB, I was honored to accept the nomination by the Secretary General. I intend to use the platform of UN Special Envoy to support governments, multinational NGOs, and private industry around the world to direct efforts to halt the suffering caused by tuberculosis and advance the TB agenda of the UN and WHO.

Q: TB is one of the world's oldest scourges, why has the world been unable to end a disease that we know how to cure?

It is true that we have developed the science to diagnose and treat tuberculosis. However, while effective, the current tools haven't changed in over 40 years. We need a rapid point of care diagnostic, drugs that can be taken for a shorter course, a broader set of drugs to address multi-drug resistant and extensively-drug resistant TB, and an effective vaccine. There are a brave few working on this effort, but it is not enough. We need to push the science forward, and at the same time focus more resources on implementation of diagnosis and treatment using the tools we do have. In the long-term, it will take economic development and improved living conditions in high impact areas to definitively stem the epidemic.

Q: Of the 9 million people with TB, 3 million are unaware that they even have the disease. How do we reach, diagnose, and treat these "missing" patients?

Patients are missed because they cannot or do not access diagnosis and treatment services for tuberculosis. This can be addressed in several ways. First, by ensuring that services are accessible. Second, by encouraging engagement of communities, the private sector, and civil society to increase awareness that treatment is available. Third, by strengthening linkages with target stakeholders, including prisons and the mining sector, where there is a disproportionally high burden of disease. Finally, by enacting policies that support universal health coverage, regulatory frameworks to support case notification and management, and other efforts to address the social determinants of tuberculosis.

Q: You have a long history of championing public health initiatives, notably in HIV/AIDS where among your many distinctions you implemented the U.S. President's Emergency Plan for AIDS Relief (PEPFAR). Are there any critical lessons learned in the fight against HIV that will inform your approach to tackling TB?

The responses to tuberculosis and HIV have much to learn from one another. However, the most important lesson I've learned in the fight against HIV/AIDS is the power of public awareness, communication and advocacy. It takes innovation and creativity to fight diseases like TB, but we can -- and we must -- do it.

Q: Many would say that TB suffers an "image" problem in global health in that few people understand how big and intractable of a problem it is. What do you think needs to be done to improve the public's and funders' passion for tackling TB?

Tuberculosis is a disease that is closely linked to poverty; over 95% of TB cases and deaths occur in low- and middle-income countries. Because they do not have direct experience with it, many people in the developed world may believe that TB is a thing of the past. As we know, it's not. As many people die each year from TB as do from HIV. It is simply unacceptable that so many people are infected and die each year from a disease we know how to cure. There is also an economic cost, as TB most affects young adults, striking in their most productive years which limits the contribution they can make to their families and societies. And finally, TB also poses a significant security risk that increases as the bacteria mutates into forms for which we do not have effective treatments. As we have seen with the recent Ebola outbreak, in the era of globalization, diseases know no borders.

Q: The World Health Organization's End TB Strategy is a 20-year strategy that envisions a world free of TB with zero deaths, disease and suffering. It sets ambitious targets and outlines actions for governments and partners to provide patient-centered care, pursue policies and systems that enable prevention and care, and drive research and innovations needed to end the epidemic and eliminate TB. What do you think are the greatest leverage points for seeing this goal realized and the most significant barriers to success?

We are at a historic moment, in that there is now growing momentum in global support for universal health coverage (UHC). As countries make strides in implementing UHC, this will provide great leverage in achieving the goals of the End TB Strategy, along with addressing a broad range of health issues. At the same time, TB needs special and immediate attention, especially in order to avoid the spread of multidrug resistant and extensively-drug resistant strains. The most significant barrier to this is the commitment of resources to expand current efforts and develop new solutions.