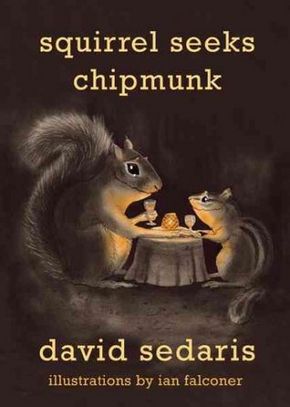 David Sedaris is currently on a worldwide tour promoting his latest venture, Squirrel Seeks Chipmunk: A Modest Bestiary, a collection of short fables personifying our favorite, and not so favorite, animals. Fans can only guess what sick and twisted words might come out of a turtle's mouth via the mind of Sedaris, and even then you may be in for a surprise, in a good way of course. Squirrel Seeks Chipmunk is a hilarious collection of off-beat tales that are certainly not suited for children. The colorful fables, thanks to illustrator Ian Falconer, are a nice break from the hilarious essays Sedaris is known for. What if a mouse owned a baby corn snake? What if jazz was slang for anal intercourse? Curious? Well I suppose you'll have to read the book to find out.

I sat down with Sedaris last night at his New York stop on the tour. As expected Barnes and Noble was packed to capacity - fans eager to hear a story fresh from his typewriter or perhaps clutching their first editions, hoping to get their book personalized by their new favorite Aesop. I was drawn an owl which I can't help but think has diabetes.

Last week on The Daily Show you mentioned "Let's Explore Diabetes with Owls" was a previous title that was rejected before Squirrel Seeks Chipmunk came about. Were there any other titles you campaigned for?

No, just that, I though it was a really nice title. I was signing somebody's book one time and they wanted me to write something like, "explore your inner feelings," or something like that. I never write what people ask me so I said, "I'll keep the word explore" and I wrote, "let's explore diabetes with owls." That was the only other one. My editor made a good point that my other book titles are all sort of long so it would be nice to have a shorter one.

There are some extremists within the fables, for instance in the story "The Toad, The Turtle, and The Duck" the toad dreams of pouring acid on the black snake's eyes, followed by shoving shit stained fruit down her throat. Do you feel animals can get away with a lot more in books? I don't think I would necessarily think, "Aww" if an adult male character was saying the same thing.

Probably. If these were people then readers would say the violence is over the top. I think they're allowed to get away with a lot more because they're animals. I was at the airport and my flight got cancelled so I went in to a customer service line that wasn't going anywhere and the toad, the turtle, and the duck were behind me in line. This one guy missed his connecting flight and he said, "The gal at the gate told me that she called my name when it came on the board but hell, she didn't call me! I should have taken her name. Hell, I should have punched her!" It was just weird because nobody said "Oh, maybe you'd slap her if worse came to worse but, um, we don't really punch women."

Were there any stories cut from the book because the editors felt they were pushing the line?

There was a story that I put on the book on tape called "The Shit and Vomit Eating Flies." My editor was a bit concerned about that story; she felt people would focus on it. It wasn't the strongest story in the book but I thought perhaps she was being a bit squeamish. I read it out loud and a woman in the audience said, "I just ate and I found it really hostile that you read that story." So my editor, once again, was right. The thing is you expect flies to eat shit and vomit. If it was a child eating shit and vomit then you might be grossed out.

But that's what flies do.

Yeah, that's what flies do.

Did you find yourself doing any research for inspiration? Such as, say maybe picking fleas off cat's heads and munching on them?

There were a couple instances - I wrote a story about an ant and an aphid who were enemies and then I did a little reading and discovered ants and aphids are best friends. Aphids have life giving nectar in their asses and ants massage it out and drink it.

Yes, they have a symbiotic relationship. I didn't know that until I started writing the story and thought, maybe I should check this.

Are you a firm believer that animals mock us?

No, I don't think we mean that much to them.

If disfigurement wasn't a concern what animal might you keep as a pet?

A crow. But I'm just afraid that it would pluck my eye out. My older sister has a parrot and I was visiting with it this weekend. Parrots are just generally loyal to one person and this parrot is fascinating, he'll get on my sister's shoulder. But see, it has a hooked beak so it would be harder for it to pluck your eye out. A crow could easily take out an eye.

Well, this is if disfigurement wasn't an issue, so you can keep your eyes.

Oh if it wasn't an issue. Then yeah, because you can get the crow to get things for you, not heavy things but you can say, "go get me that quarter over there," and it might do it.

I'm a feline lover. I'm no friend of the dog, I don't trust them. I always think they're going to bite me.

When can we expect a new essay collection?

I think I've had six essays in The New Yorker since the last book came out and I just finished this long lecture tour so I wrote many new ones during.

I don't really do that well with themes, I don't have much to say about any one thing. If I was going to travel around the world on foot and only stay at hotels that start with an 'A' I wouldn't do very well that way. That would be a pretty silly book wouldn't it?

To catch David Sedaris on tour click here to find an appearance near you.