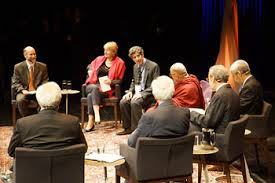 On May 14th and 15th, the UW-Madison Global Health Institute and the Center for Investigating Healthy Minds engaged with the Dalai Lama and an interdisciplinary group of global thought leaders to explore the potential contributions of mindfulness meditation to sustainable global health.

We hosted two incredible panel presentations at Madison's Overture Center and both sold out - for those who could not be there or follow the live webcast, you can view recordings and transcripts of both programs at Change your Mind Panels.

All the presentations spoke to me in different ways. Here are some highlights:

Chade MinTang, Google's leadership coach and "jolly good fellow," told me that devoting 10 seconds every hour to compassionate intentions would change my life. I am definitely going to try this!

Richie Davidson, famed UW researcher, presented his research which convinced me that 30 minutes of daily mindfulness practice could help me to reduce stress, reshape my mind, and make me more compassionate.

Richard Layard, the economist co-author of the "UN Happiness Report", counseled me not to measure my happiness by how much money I make: We need to find a more sensitive instrument than gross domestic product, and he thinks a meaningful happiness index is possible.

Don Berwick, pediatrician and healthcare quality expert, shared some unsettling truths about health care: Despite the medical miracles that can cure cancer, the system is not operating efficiently or equitably, and the high costs are keeping us from making other important social investments.

Dan Goleman, author of the best-selling book Emotional Intelligence, focused on, well, focus: If you are not present to the moment, it will be hard to be compassionate and act on what you believe.

Ilona Kickbush, global health policy expert, shared a holistic view of health and well-being, and urged us to work toward health through all sectors of society. Her leadership on the panel was wonderful, but she correctly pointed out that one woman's voice is not enough in discussions like this, and she reminded us that we will all need to have the courage to speak truth to power if compassion is to be the dominant ethos in our world.

Jonathan Patz, UW climate change expert and Global Health Institute Director, illustrated the importance of holistic approaches to sustainable global health, with an example from Borneo, where a well-intentioned plan to prevent malaria by killing mosquitoes rippled through the chain of life in a village and caused all the roofs to cave in. It would have been a wonderful fable if it were not a true story!

Mattieu Ricard, a Buddhist Monk reputed to be "the happiest man in the world," reminded us that training the mind is truly possible. Mental discipline can help us to control the impulses, ruminations and cravings that lead to appetites that function like harmful additions, where we experience wanting without enjoying.

Ariana Huffington pulled the themes together, reminding us that we live in a unique moment, and that these powerful ideas can really make a difference. She also encouraged the audience to explore GPS for the Soul, which allows people to monitor stress and address it with relaxation and mindfulness techniques though a cell phone. See Ariana's instructional video here.

But what about the Dalai Lama himself? What was it like to be part of a conversation with him? What did he say to me? 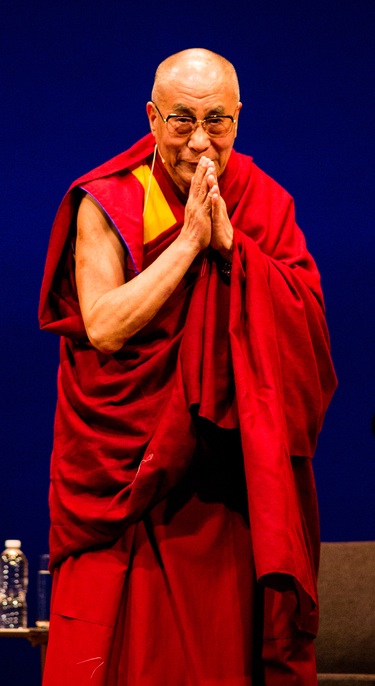 The Dalai Lama sat in a high back cushioned chair, wearing a Wisconsin cap, on the Overture Center stage before a crowd of thousands. It was like being in the presence of a wise, honorable grandfather. He laughed at his own (clever) jokes and recited profoundly simple truths about compassion and peace. He said we should all get together to save the planet.

The format dictated that the global scholars from various fields would share their ideas for the Dalai Lama's response. He affirmed the wisdom of what they were saying, and encouraged them to go out into the world to tell others. He was expressing complicated ideas in his second language -- which led to over-simplification at times. In preparation for the event I had read speeches and teachings of the Dalai Lama (for a great collection by topic of interest see HHDL Teachings), so for me, his sometimes staccato statements evoked his written works and were meaningful.

By the time I took my seat for the second panel, which was intended to be a similar but not identical presentation for a second audience, things were pretty familiar. The Dalai Lama sat across from me on his chair, the audience was quieter somehow, and I was able to pretend we were in a living room together, engaged in conversation. As time went on his comments were less like direct responses, and more like reflective holistic comments on how we might advance global health and well-being. I leaned in, now we were getting somewhere!

He affirmed the role of science in changing the world, and made it clear that he espouses secular morality as the appropriate guide for global change. Even though he is a religious leader, he relegates religion to the personal realm, and he feels that there is a common core of shared moral values that transcend particular religious or secular traditions. He wanted to be very sure that we understood that he was using secular in a way that was neutral to religion, and not anti-religion, and he also wanted us to know that he was including people who consider themselves atheists as members of this secular moral community.

He reminded us that the brain and mind are not one in the same! He spoke of eye consciousness, of ear consciousness, of the power of full presence in physical labor -- planting a garden, washing a dish, singing a song. These can all be sacred contemplative acts. The mind should not be reduced to brain function. The way I heard it he was suggesting that there is still some mystery to human identity and will....

He insisted that it is very important to include the voice of the poor in the conversation about sustainable global health. Environmental challenges and suffering due to poverty need to be addressed by all together, as one human community of 7 billion people. The architects of change must include the poor and vulnerable. That is what he said.

He had mentioned education many times in the morning session, but in the afternoon he got to his point: He feels strongly that education must go beyond imparting knowledge to cultivating morality. He said, "the moral voice cannot be silent." And mindfulness practice and ethical training have important contributions to make to education.

He also spoke of peace and disarmament and stated that he is truly saddened that people use their talents to kill. He focused on those who make bombs and guns, but this perspective extends logically to other kinds of products that kill, like cigarettes, and has implications for all endeavors that lead to the destruction and degradation of the environment through contamination, resource depletion, or the extinction of species. To quote the Dalai Lama verbatim, "We must take more serious care about mother planet."

Overall the events inspired me to rededicate myself to my contemplative practice as a Benedictine Oblate. I would like to cultivate a more direct feed between the compassion and loving-kindness that I feel, and my actions. I look forward to continuing the "Change Your Mind" conversation, and I hope to discuss these ideas with more depth and rigor, and to include more voices. To that end I would love to hear comments from others who were at the event or who have been part of the conversation through the transcripts or videos.

Photos are author's own.

To continue this conversation or learn more about global health please visit my blog, Global Health Reflections, at: http://globalhealthreflections.wordpress.com/about/.