This week, in a simulation of the coming July GOP convention, the tumultuous 2016 election took a theoretical new twist. At a meeting of the prestigious legal society, Inn of Court, attendees were randomly assigned to play the roles of real estate mogul Donald Trump, Sen. Ted Cruz (TX-R), Gov. John Kasich (OH-R) and The Republican National Committee.

What emerged was the jarring image of Donald Trump and Ted Cruz forming an independent Trump-Cruz ticket. The match was made when RNC players issued late-hour rulings that favored John Kasich's nomination. 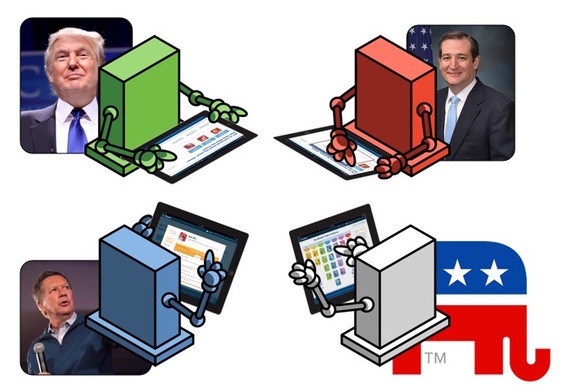 True to the gridlock era, no team appeared to win. Donald Trump bolted the party he pledged to support -- and with a VP pick he has cast as a liar. Ted Cruz, a chagrined man-in-the-middle, salvaged his campaign and political career to join a high-risk third party ticket. John Kasich presumably prevailed as the GOP nominee, though only the favorite of a devastated and depleted Republican party. And while the RNC stood by its brand and principles, it could only watch as the Trump and Cruz teams ceremoniously walked out of the pretend convention.

The game, conducted at the U.S. Patent Office in Alexandria, VA, merged the time-honored four-player U.S. Department of Defense wargame format with The Standard Table of Influence, a landmark classification system of 24 unique stratagems in communication, social media, marketing, sales, politics, law and the military.

Serving as game director, Laurin Mills, a partner with the law firm LeClairRyan, presided over 70 attorneys in animated and often playful planning and debate. Mills was assisted by former ambassador to Denmark Laurie Fulton and his LeClairRyan colleague, David Warrington, a former general counsel for the Ron Paul 2012 presidential campaign committee. Here is the brief that Mills presented to the participants:

It's the run-up to the Republican National Convention. Donald Trump has amassed 43 percent of the available delegates, but polling shows that Hillary Rodham Clinton beats him by five percent in a head-to-head race. Ted Cruz has 34 percent, but he loses to HRC by a wider margin. Reliable polling reveals that Kasich is the second choice of more than 60 percent of the delegates and Kasich could beat HRC in the national election.

Below is an edited transcript of the approximate positions, influence plays and language that emerged in this 75-minute exercise. Please note that the influence strategy Trump is named originally for the preemptive ploy in bridge, not the candidate. Influence plays observed in the simulation have been aggregated to form the composite strategy signatures of each player, shown below.

TRUMP I want to be a uniter. I'm the guy who can bring the party together and make America great again. (Play: Fiat) 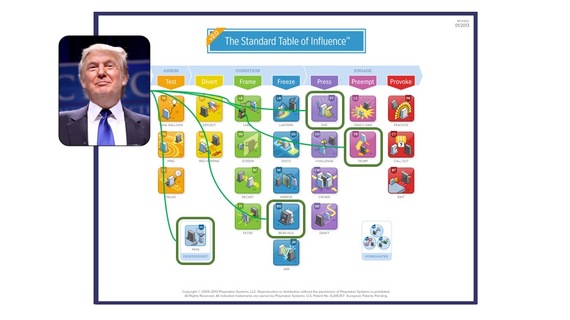 KASICH There is only one candidate who can beat Hillary Clinton -- me. If you sit back and look at the big picture, I'm the only realistic option for Republicans winning in November. (Play: Recast)

CRUZ If you agree to back me, I'll ask convention delegates to pick my VP. (Play: Challenge)

CRUZ I'm announcing today my offer to Donald Trump to be my VP. (Play: Trial Balloon to delegates, Trump to RNC) 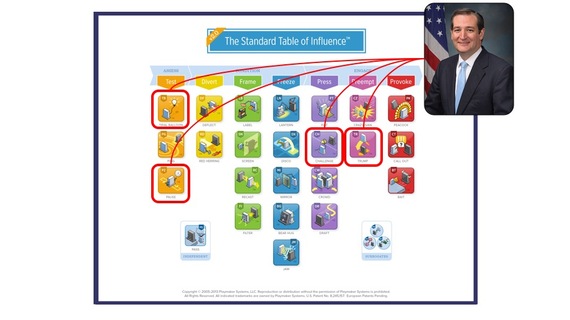 RNC Having the authority to set rules and procedure, and being the steward of conservative principles (Play: Lantern), we hereby require that any candidate to whom delegates are attached shall have been a registered Republican for the last four election cycles. (Play: Jam) 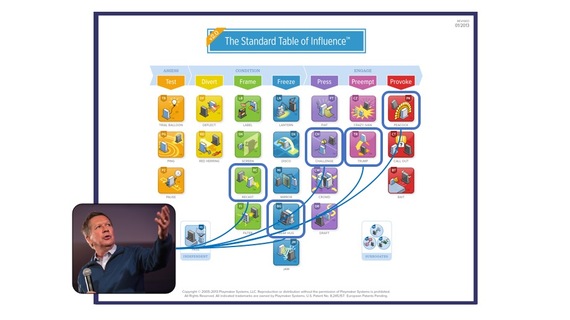 KASICH I respect the authority and wisdom of the RNC. This convention should be for real Republicans. (Play: Bear Hug) If I become your president I will, at the earliest opportunity, nominate Ted Cruz to The Supreme Court. (Play: Trump)

RNC Understanding that no candidate has come to Cleveland with a majority of delegates, and to speed what will obviously be a multi-ballot proceeding, we are announcing the immediate release of all delegates. (Play: Trump) 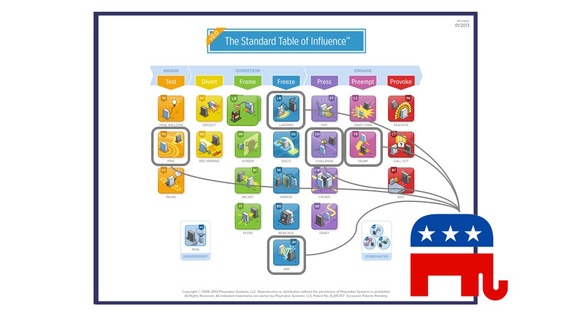 KASICH As delegates consider their options, I ask that they think simply about the concept of governing and determine who, among elected executives of the United States and territories, has the experience to serve as president in a manner that is positive, productive and mutual. (Play: Peacock + Challenge)

CRUZ I am prepared as we enter this convention to offer Donald Trump my candidacy as his VP and running mate in a new party. (Play: Trial Balloon to Donald Trump, Trump play to RNC)

Call them wargames or strategic simulations, this exercise represents just one possibility among many of what may come in Cleveland this July. Mere shifts in semantics, changes in the order of play, and other deviations could easily have produced a different outcome. This one, though, was a stunner and one for the candidates and their party to study.