For months -- years even -- a column has been gestating. A journal naming issue with a new editor-in-chief position -- more on this below -- brought the subject forward. Then came the whap to all of our faces of the British Medical Journal article reminder that medicine, in the USA, is the nation's third most powerful cause of death. The question: Is it smart for the integrative health and medicine movement to abandon the radicalism of calling for an "alternative medicine"? 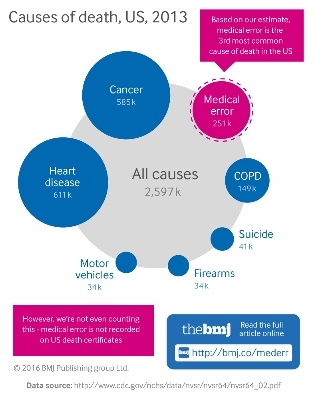 The BMJ news of 250,000 deaths annually from medicine as routinely applied may be argument enough to call for some sort of "alternative."

The news will shock but not altogether surprise millions of human beings who as consumers and practitioners begin an exodus from fealty to regular medicine three decades ago. These people saw and felt the limits of the business of drugs first and surgeries after that characterized what was then only revving up to become the $3 trillion industry it is today. I was one of them who stepped away.

The vast majority of us -- some 97% in surveys -- weren't saying good-bye to what is valuable in regular medicine. We weren't stupid. After extensive study following my 2008 throat cancer diagnosis, I took my course of 33 radiation treatments and my 3 Cisplatin treatments. I simply added a good deal of very useful complementary, supportive care -- pre, during and post -- that no one in the academic medical center where I got my treatment recommended.

No -- we sought and still seek alternatives to dehumanizing, production-centered, technology-oriented, natural process-denying, bulling disregard for the value of other professions and practices that an alternative "holistic" or "whole person" or "natural" or "mind-body" approach to what ailed us.

We want an alternative to an opioid strategy such as that propounded by the CDC and the Obama administration's 1.1-billion plan that denies the value of multiple non-pharmacologic, alternative and integrative approaches.

We want an alternative that says Never Only Opioids. 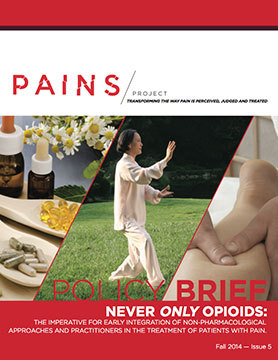 We want an alternative that says never only any long-term course of a drug known to have significant adverse consequences when used chronically if other approaches might limit the need or reduce the harm.

We want an alternative that focuses on health, well-being and healing.

We want an alternative to decision processes that exclude entire licensed practitioner groups -- chiropractors, acupuncturists, integrative and naturopathic doctors, holistic nurses, massage and yoga therapists -- when it is clear that millions of citizens of the United States are benefiting from their services every single day. Right now. This moment. Not awaiting Big Brother's sanction.

We want an alternative to medical practice that starts with drugs and invasive measures and fails to put personal engagement, lifestyle choices, and determinants front and center. We want a therapeutic order such as that propounded by the naturopathic physicians and urged as "conservative care" by chiropractors and integrative medical doctors and others of those who provide "alternatives" to regular care. 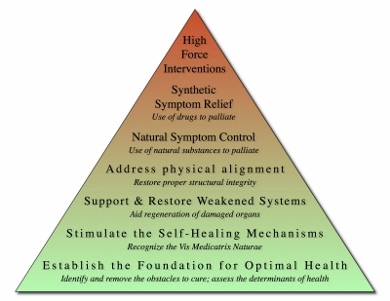 We want an alternative to a self-justifying medical ethos that asserts that people don't want to change.

We want an alternative to the 5 minute or 15 minute office calls that drive physicians to prescribe drugs and flat-out deny the complexity of what got people in trouble in the first place, and the time needed to learn, and to unravel and resolve the issues.

We want an alternative to any medical doctors or other health professionals who lack a primary respect for the roles of nutrition, self-care, mindfulness, sleep, movement, environment, community and the actual science of supporting individuals to health.

We want an alternative to a payment system that puts the workaday wizards of change agency with people's health processes at the bottom of the totem pole or, more likely, hatchets them off altogether.

We want an alternative to any major invasive procedure that does not include supportive preparation and post-event strategies to assist healing.

We want an alternative to an industrial approach to payment and delivery that directly drives the morbidity and mortality reflected in those ugly data from the British Medical Journal. First, do no harm.

The movement from "alternative" to a new language of "complementary" and "integrative" when it arrived in the mid-1990s was partly what would, on the street, be called a "suck-up" gesture. I participated, and still do. We were trying to find a way to play inside the power-centers of the juggernauts, world views, and abiding priorities that daily generate the BMJ outcomes.

"Complementary" I will always like. The word is a clinical expression of the move in health care for interprofessionalism and teams -- of practicing and learning with, from and about each other. Each complements the other. If you wonder to what extent this relationship-based approach is an "alternative," check out perspectives of leaders of this National Academy of Sciences initiative speaking of the "end of tinkering" and the need to "break the boxes" of present practices.

The reframing to "integrative" was tap-rooted in the work of medical doctors coming from the alternative and natural medicine traditions, like Andrew Weil, MD. They were beginning to engage the daunting political-economic-medical work of reforming academic medicine from the inside. Diplomacy was required. "Alternative medicine" was a bold challenge. "Integrative" was reassuring. Regular medicine is still the center. You are still in the driver's seat. The word has been a door-opener.

Yet these integrative medical doctor change agents in their self-definition call for a relationship centered system that is inclusive of all health professionals and disciplines, focused on health and healing. Would you say this is an "alternative" to what we have today?

"Integrative" has its value. But does it capture what is needed?

So, to the opportunity that provoked this column. I was asked a month ago, out of the blue, if I would like to become editor-in-chief of the first peer-reviewed, indexed journal in what is now the "integrative health and medicine" field. The journal was born 20 years ago when -- as my father would have put it -- "integrative medicine" was hardly a gleam in anyone's eye. The publication is the Journal of Alternative and Complementary Medicine.

I was told that renaming is on the table. Do we keep the name as is? Do we add "integrative"? Do we, as a federal research agency and an academic collaborative have recently chosen, lose the "alternative"?

Amidst the politics of pleasing Father -- or not -- what do you think says it best? Do we want an "alternative" to our present way of doing business, and prioritizing treatment?