Michael Pollan's documentary film In Defense of Food premieres on PBS on Wednesday, Dec. 30. In the film, based on the book of the same name, the best-selling author repeats his now famous dietary advice: Eat food. Not too much. Mostly plants. If you cook for yourself, this advice is fairly easy to follow. Unfortunately, professional chefs have very different incentives. Let's take them one at a time:

Eat Food. Whether it is your favorite local restaurant, a national chain or most school and hospital cafeterias, the primary driver of the ingredients being used and selections being offered is the operator's bottom line. In other words, nutrition, health and sustainability are typically an afterthought -- if any thought at all. To quote Pollan, "the liberality with which [restaurants] drop in whole sticks of butter is astonishing." The problem is that people are eating out more than ever. According to the CDC, many kids eat fast food every day. And as Pollan succinctly explains, "it's not food if it arrived through the window of your car." 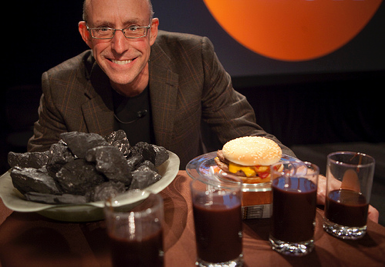 Michael Pollan illustrates the amount [26 ounces] of oil that goes into processing a double quarter pounder with cheese. CC photo by Kris Krüg.

Not Too Much. It's counterintuitive, but as explained in an earlier HuffPost blog, restaurants are incentivized to offer excessively large portions. Restaurants' fixed operational costs (rent and labor) tend to be much higher than the relatively low variable costs (food and beverage), making the the incremental cost of larger servings relatively insignificant. Furthermore, restaurants believe they have to serve portions that satisfy the demands of the most voracious eaters, not the average. As Pollan points out, "restaurants serve supersize portions to make you feel you're getting your money's worth."

Mostly Plants. Though mainstream media seems to celebrate the sometimes shifting and even conflicting dietary advice of "health experts," one mainstay that has survived the test of time is "eat your vegetables." Unfortunately, fresh produce has a shorter shelf life and is more challenging to ship and resell compared to most processed foods and animal-based products such as dairy and meat. Furthermore, processing foods makes it easy to add sugar, salt and fat, which are not only cheap, we are all hardwired to crave them. As mentioned in the highly acclaimed film The Weight of the Nation, "the kind of food we eat in this country is the kind that is most profitable." And unfortunately, most processed foods have a 90 percent profit margin compared to 10 percent on produce.

In other words, we have an incentive structure that promotes the wrong type of foods, which have come with an enormous cost to all. It is difficult to overstate the implications of the current American diet. According to the CDC, the most likely causes of death in U.S. today are related to the food we consume. A recent study in the Journal of American Medicine suggests that nearly 50 percent of adults living in the U.S. have diabetes or pre-diabetes. As Pollan succinctly summarizes, "the health care crisis is a euphemism for problems induced by the American diet."

For more information on how to make the best choices when eating out, Michael Pollan's Restaurant Rules, and look for REAL Certified restaurants. Also, make sure to watch: "In Defense of Food," airing 9-11 p.m. EST Wednesday on PBS stations (check local listings).