My son is a high school football player and I love watching him play the game.

I never played organized football. When I started sixth grade, I told my dad I wanted to play ball. And he said no. Dad was afraid I would hurt myself so he told me I couldn't play. End of story. And for years I felt as if I missed out on something important. At my high school, I was envious of the camaraderie the players had, and I wanted to be a part of that. On the field they exerted themselves for the pride of our school, they sweated, suffered and bled for one another. Win they won, they all shared in the glory. When they lost, they accepted defeat together. And they went back to work on Monday afternoon and made plans to try and win their next game.

My dad did let me take Tae-Kwan-Do, and in college I soon found myself racing bicycles. I won a few medals and earned a lot of scars in cycling and more importantly, I found the missing element I had been looking for. I learned the importance of teamwork, of sacrifice, of training together, and suffering together. And those lessons are still with me today.

When my son entered sixth grade, he asked about football and I said yes. He had played years of little league baseball and wanted to give football a try. Every season we've discussed the dangers and he's accepted them. He's tried other sports: wrestling, track and field, gymnastics. It is football, however, that provides that spark in his life. In his three years of high school football he's learned valuable life lessons that would not have come from non-athletic endeavors. He's been pushed physically and mentally, he's overcome injuries, found the will to win, and made friendships that will last a lifetime. And he's been an integral part of a winning program. 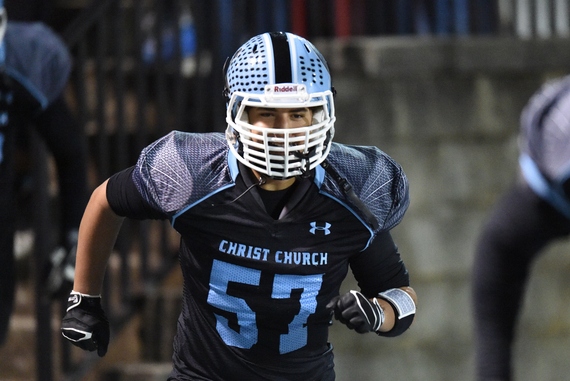 Even though they won't don uniforms until July, this year has already been challenging. On the college and professional level, there's been several high-profile career-ending injuries and notable retirements. And that trickles down to the lower levels of the game and affects choices made by parents, coaches and potential players. Yes, contact sports are dangerous. Competitive soccer, volleyball, swimming, gymnastics, baseball, etc. are not without risk. But stop and think about the risk of your kid not getting to participate in a team sport. Where else will they be asked to give of themselves for the good of a team? Competing in a team sport should exploit all of your faculties, every one of your physical and mental abilities. Sitting on the couch, never learning what you're capable of, that sounds much more dangerous to me than actually competing on the field.

Hazards are all around us and our lives are a series of calculated risks. Driving to work can be dangerous. Asking for a promotion may be met with a stinging rebuttal, or perhaps with a smile and a congratulatory handshake. After competing in sports, I believe I'm better equipped to handle the rigors of business. I still ride bikes, though it's been many years since I competed. And there's inherent risk from riding a bike, with or without utilizing public roads. Yet the joy, satisfaction, camaraderie, and health benefits I receive in return are tough to put a value on. Sitting on the couch, never learning what you're capable of, that sounds much more dangerous to me than actually competing on the field.

I'm not suggesting to choose chess over volleyball or vice versa, but rather to have a healthy respect for both the cerebral, and the physical. There is great value in giving your all and winning, likewise in giving your all and coming in second place, or in last place. Yes, your child may get hurt. They might leave their blood and sweat on the field of competition. When they lose, there's opportunity to better themselves, to plan and train for the next match. If they win, there's a desire to continue and win again. When they leave the field, they may hold their heads in triumph, or hang their heads in defeat. And when that moment comes, they might also say, "Mom, Dad, I did my best."