We have it again.

Not all of us this time. Not even most. But enough.

The tiny combs are unsheathed. The bedding has been bagged. The house smells of coconut oil and eucalyptus. Also frustration.

We should probably cancel the play date we scheduled for Tuesday. And alert the school nurse just to be safe. For a little while, anyway, we'll be that family.

Which isn't exactly fair, since lice don't choose their hosts. They do not hand-select the most slovenly or ill-behaved among us. They just cling to hoodies, hats, and pigtails, and wait to catch a ride on the next person who leans in for a hug. If anything, you might say that head lice, well, they follow the love.

But that's not what it feels like at first.

When you find a bug on your child, it's disgusting. Serious heebie-jeebies. And for every one that you see, there are usually a bunch you don't, including dozens of these little eggs (nits) cemented to your kid's hair. Of course, that grossed-out-ness morphs pretty quickly into annoyance. Because getting rid of lice is a pain. You really do have to comb repeatedly, strand by strand, removing bugs and eggs as you find them, being sure to dispose of them in chemicals, oil, or bleach, in order to prevent them from crawling right back onto your kid again.

And once you get the infestation under control, the embarrassment sets in. We can't let anyone know. Because once you are outed as a head lice family, fingers point to you. As though you purposely infiltrated the softball helmets or distributed free lice to other children during the school picnic. For a time, kids may even shy away from befriending your kids. Which, of course, sucks. All over a couple of bugs.

But it does not have to be like this.

Because, in addition to everything I have already said, having head lice is also kind of...nice.

Yeah, I said it. Lice can be nice.

If you are (un)lucky enough to discover a louse on one of your kids, or (gasp) even on yourself, you immediately enter a holding pattern. Whatever you had planned is canceled. Wherever you were heading, you're not. Instead, it's kind of like a snow day. You are staying home now. To treat lice. Which, while irksome, is also among the most old-fashioned of parenting rituals. Like churning butter. Or dipping strings into hot wax to make candles. Plenty of monotonous tasks bring a sense of calm - weaving, knitting, meditation. Combing out head lice can be soothing.

I know folks like to hire professional nit-removal companies to handle outbreaks. But I maintain that having lice is an opportunity - to withdraw, bond, and reconnect with our kids. We use oils treatments instead of chemicals here at our house. But with either medium, you need to focus. When you are combing, you can't cook, or clean. Or fuss with your computer. Or play on your phone. You just have to be with your child, combing and talking, talking and combing, trying to take the bugs -- and the stigma -- away.

It takes a long time. If you comb out your kid in less than an hour, you have probably missed a bunch of bugs. So take your time. Gaze at your precious kiddo for longer than usual. Savor the break from busy-ness. It's like a vacation without the fuss of packing and actually going anywhere.

And it is an opportunity to teach perspective. It is okay to be initially dramatic. To panic and blame and kvetch. But having head lice is also an opportunity to show your kids the difference between an actual problem and a nuisance. Use the comb-out time to talk to your child about actual issues. Discuss topics that are bigger than a few bugs on a comb. During our most recent louse bout, my daughter and I talked about peer pressure and dating, the Syrian refugee crisis, and whether either of us would volunteer for a mission to Mars.

If bonding with your kid is not enough to reframe having head lice, there's the comfort of the very phrase itself: nit picking. In other contexts, this is something of a slam. Nobody wants to be called nit-picky. But lice give you permission to be fastidious. When you comb those tiny eggs off of a strand of hair, you are quite literally "nit-picking." Chasing out invaders. Committing to a painstaking task. I carry around lengthy To-Do lists and end nearly every day with dozens of items left undone. There is something so satisfying about succumbing to your inner nag and meticulously completing a tough job.

And finally, having head lice is a chance to demonstrate solidarity with your kids. No matter if it's a big case or one bug, I always treat my hair, too. I douse it in coconut oil infused with a few drops of tea tree, and maybe some thyme, and I wrap it in an old towel or hair net. I do this for three reasons:

1. I'm paranoid. If you have ever had lice in your house, you will start psychosomatically scratching whether you have them or not.
2. It smells good. Aromatherapy soothes the stress of a head lice crackdown.
3. It is a reminder to my kids that I will not let them suffer humiliation alone. For all my preaching about the niceties of lice, other children (and parents) will sometimes ostracize, ridicule, and judge. I want my kids to see I am in this battle, too. I share their discomfort and am on their side.

So if these little buggers ever hop on your little buggers and enter your home, do not fear. Call off work, mix up those oils, grab a tiny comb. And accept the invitation to be fully present for your kids during a time of embarrassment and distress. We don't always need to make little things a big thing.

Unless it's bedbugs. Blech! Because those guys are a different story altogether. 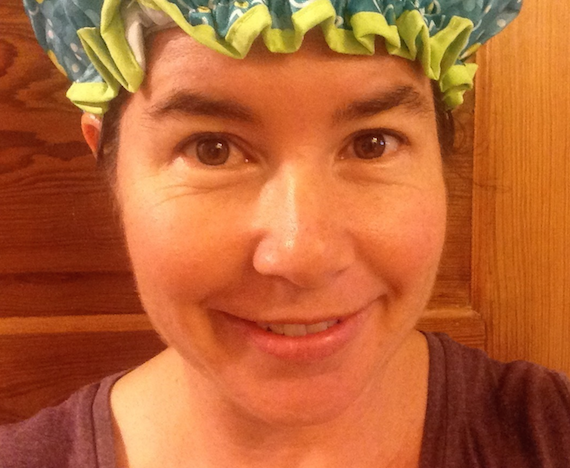 Founder of DadvMom.com and author of Here Be Dragons: A Parent's Guide to Rediscovering Purpose, Adventure, and the Unfathomable Joy of the Journey