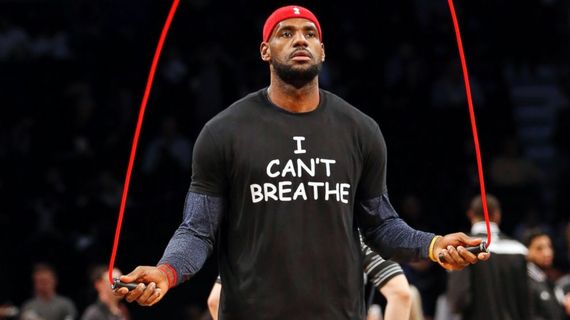 Recently there have been calls for LeBron James to join the protests over the decision not to indict the officers involved in the fatal shooting of Tamir Rice. The shooting after all did take place in the very city that James plays for. James' response to this was actually very important for understanding exactly why athletes should not be expected to get involved in social issues merely because of their fame. James has been vocal about racial issues in the past, such as wearing a hoodie along with the rest of the Miami Heat team after Travyon Martin's death or wearing an "I Can't Breathe" t-shirt in honor of Eric Garner. This time, James' response to Tamir Rice's death was simply, "To be completely honest, I haven't really been on top of this issue. So it's hard for me to comment on it."

I actually admire James' decision to stay quiet on a situation that he has little knowledge on, rather than giving an uninformed opinion. In my opinion, James demonstrated exactly why we should not expect athletes to be voices when it comes to serious social issues. Like James, many athletes are simply too caught up in their sport to really be on top of social issues. For this reason it is not uncommon to find examples of athletes taking political positions without really understanding the deeper issues involved.

In my book Muhammad Ali, The Confederate Flag, and Other Essays, I point out that Muhammad Ali, perhaps the most politically relevant athlete in the history of American sports, very rarely understood the major political issues of his day. He is best remembered for refusing to enter the draft during the Vietnam War, but this was because he was a member of the Nation of Islam at the time. Members of the Nation of Islam were expected to go to jail rather than allow themselves to be drafted to fight wars for a country that had failed to secure equal rights for black people. Elijah Muhammad, the Nation's leader, was similarly jailed for not supporting the war effort during World War II.

Ali often found himself being involved in political issues that he really had little knowledge of. For instance, Ali fought the famed "Rumble in the Jungle" bout in Zaire, which helped to further enrich the dictator Mobutu. Ali also found himself representing President Jimmy Carter in a diplomatic mission in Africa to get five African nations to support America's boycott of the 1980 Olympic Games in Moscow. The problem was that Ali had little knowledge of international politics and many Africans were outraged that America would even send a boxer to serve as a diplomat in the first place. Most puzzling of all was that in the 1980s, Ali supported the presidential campaign of Ronald Reagan, despite the fact that Reagan had criticized Ali's stance on the Vietnam War.

Ali is a revered figure not only for his boxing abilities, but for the fact that he was very vocal when it came to social issues such as racism. With that being said, Ali certainly was not a political scientist, however well-intentioned he may have been. It is great whenever an athlete does speak out on racial issues, but the reality is that very often athletes simply do not understand the politics of racism and other social issues enough to make significant contributions. Charles Barkley certainly has been vocal on racial issues, but his statements have not been particularly insightful or helpful. Richard Sherman's comments on the Black Lives Matter movement is another example of an athlete speaking on racial issues without really adding any insightful or new perspectives to the conversation on race.

In criticizing James' comments on Tamir Rice, activist Shaun King explained: "I know LeBron isn't Muhammad Ali and I definitely knew he isn't Malcolm X, but for him to basically say he can't even comment on this case because he simply doesn't know enough about it is appalling." Personally, I would prefer James' silence on issues that he doesn't know about over other athletes (including Ali) that have in the past taken positions on issues that they knew very little about.