Combined with the Mexican dress I selected for the occasion, my facial hair gave my first-grade school portrait a distinct Frida Kahlo vibe: 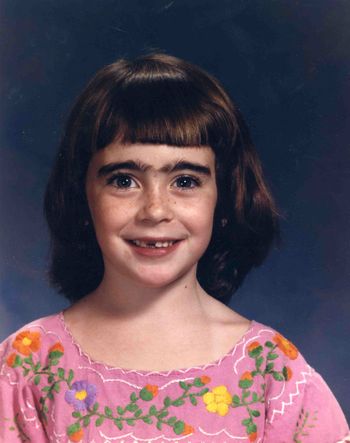 It was actually pretty cute.

But fast-forward seven years, and cuteness had left the building. 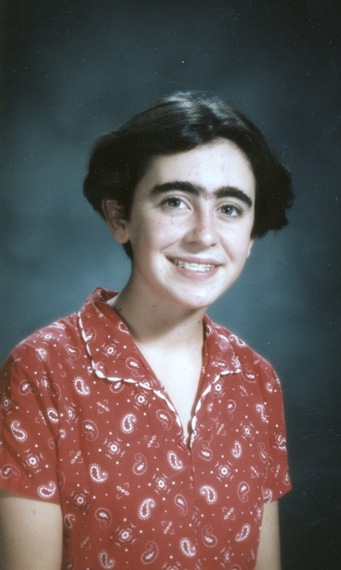 Acne, a retainer, an inexplicable mushroom cut, and disappointingly uneven breast growth -- not to mention a penchant for wearing clothes made from bandanas -- had conspired, along with my still-resplendent uni, to create an undeniable awkward phase.

Looking back at photos from that period, it's hard to believe I made it that far without some sort of intervention. I mean, it wasn't the Middle Ages; tweezers existed. Culturally, we were at the early '90s height of You Better Work supermodeldom, in which eyebrows were as waifish as waistlines. And to top it all off, I was teased at school, branded with the nickname "Unabrow," thanks to the cosmic joke of an overlap between my first name and affliction.

When I ask my mother why she did nothing, she just smiles wistfully and says, "You were beautiful the way you were." Which is sweet, if (according to my 20/20 hindsight vision) objectively incorrect.

Still, I'm eternally grateful to her for making me feel that way for so long, even if it means occasionally recoiling at photos taken between 1992 and 1999. I didn't know it then, but I know it now:

Today, kids can find "selfie" in the OED and use "favorite" as a verb. Nine-year-olds have Instagram accounts. The premium put on physical beauty may not have increased, but it's certainly expanded; the 24-hour-a-day judge and jury of the Internet never quiets. And that's why I think it's more important than ever for us as parents to adopt a laissez-faire attitude towards our children's appearances.

Now, obviously I'm not suggesting dangerous conditions like childhood obesity go unchecked, or that kids suffering from bullying be ignored. I'm simply arguing for the relatively benign markers of puberty -- glasses, acne, braces, big noses, chubby or gangly physiques, unibrows, and the like -- to be allowed to flourish, when possible, for the following reasons:

This is not the same thing as saying "it gives you a good personality," because even though nearly everyone who was once homely was told at some point that they had a "good personality," statistically it just cannot be true in all cases. Sorry.

I do believe, however, that having even the briefest of periods when your exterior betrays you helps you to become a better person on the inside. Like losing one of the senses and having the others strengthen in response, not being able to coast on beauty forces kids to focus on the development of other, more important virtues, like kindness, intelligence, and humor. (The risk that they may someday grow up to write a book about their awkward phase takes away from these triumphs only slightly.)

2. What They Don't Know Yet Can't Hurt Them.

If your kid doesn't like the way he or she looks, and they ask you for help, then you're doing them a favor. But if your kid seems happy and oblivious, and you step in to "fix" them to protect them from ever being marginalized or teased, then you're doing them a disservice. Simply put, what we know from our own experiences hasn't hurt them yet -- and it may never hurt them, because they aren't us. The body-blind confidence of childhood is so fleeting! Don't cut it off prematurely. What happened to you may not happen to your child. And if it does, you'll be there to help them through it.

3. Our Cultural Standards of Beauty Flip-Flop More Than Scott Walker at Sandals Jamaica.

As anyone who's paged idly through a few fashion magazines can attest, beauty trends can do a complete 180 from one season to another. Since I'm overly sensitive to the plight of the human eyebrow, I can tell you that over the past decade the "It" shape has changed with such a frequency that it's nearly impossible to stay current without having a professional threader move into your home. The same can be said for lips, hips, breasts, noses, pant legs, panty lines, bangs, mutton chops, mustaches, and anything else we have even the faintest control over. Needless to say, it's all bullshit. It's bullshit that we should ever feel we have to look a certain way in order to be considered attractive, and it's bullshit that anyone who tries is rewarded with an immediate change of plans.

Let's agree to teach our kids that it's bullshit. Being who you are is beautiful. Sure, acne may never be on the cover of Teen Vogue with a headline that says, "Whiteheads: So Hot Right Now!" but so what? Everything else will come full circle, and pimples go away eventually -- or so I'm told.

So if your child is in the midst of waging the unwinnable battle that is puberty, or even if he or she is just making some questionable grooming choices along the windy, circuitous path to self-acceptance, try to resist the urge to step in with a save.

And if they come to you with insecurities, show them your old photos. Hell, show them mine! (I have a lot more where these came from.) Tell her she's beautiful. Tell him he's handsome.

They won't believe you, but that's OK.

Your job is just to hold up the mirror of what you see, until the day comes when they can see it for themselves.

**
Una LaMarche is the author of three books, most recently the comic memoir Unabrow: Misadventures of a Late Bloomer.

Increase Your Domestic Bliss With These Labor Day Home Sales

Do You Want To 'Boomerang' At Work? If So, Join The Club