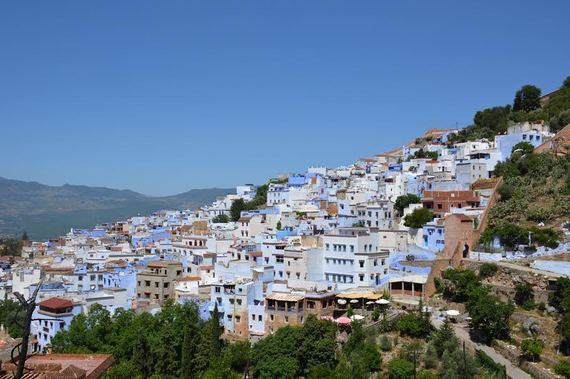 You can judge a book by its title. Perhaps there is more than a grain of truth in that saying in the recent article by Leela Jacinto in Foreign Policy. The article and its sensationalized title belong to the unfortunate trend of parachute journalism that descends on current events with no prior knowledge, labors to grasp at straws of relevance, but sadly fails to deliver. The author makes a number of questionable blanket statements in its attempt to establish a tenuous link between the recent wave of terrorism in France and Belgium, and the northern mountainous region of the Rif in Morocco, where some of the terrorists claim ancestral homeland. Jacinto goes even farther than this, making the unsubstantiated assertion that the Rif region is the "heartland of global terrorism" - not Molenbeek, Raqqa, or Waziristan. She writes:

"At the heart of terrorist strikes across the world over the past 15 years lies the Rif. A mountainous region in northern Morocco, stretching from the teeming cities of Tangier and Tetouan in the west to the Algerian border in the east, the Rif is an impoverished area rich in marijuana plants, hashish peddlers, smugglers, touts, and resistance heroes that has rebelled against colonial administrators, postcolonial kings, and any authority imposed from above. For the children of the Rif who have been transplanted to Europe, this background can combine with marginalization, access to criminal networks, and radicalization to make the vulnerable ones uniquely drawn to acts of terrorism"

Instead of focusing the article on an analysis of the nefarious effects of marginalization and religious radicalization in European suburbs and banlieues, the author takes a detour to the ethnic and regional background of the terrorists' ancestral home. What evidence does Jacinto present to substantiate these claims? Notorious terrorists such as Najim Laachraoui and the parents of Salah Abdeslam were born in Morocco in the Rif. That evidence seems thin at best. She, however, does offer the slight disclaimer that the ringleader of the Paris attacks, Abdlehamid Abaaoud, didn't come from the Rif, which should provide an early debunking lacuna in the entire premise of the article:

"Laachraoui was Riffian: a Belgian national predominantly raised in the Schaerbeek neighborhood of Brussels but born in Ajdir, a small Moroccan town with a proud Rif history. Paris attack suspect Salah Abdeslam and his brother Brahim, who was one of the Paris attackers who targeted bars and restaurants in the 10th and 11th arrondissements before blowing himself up at a popular Paris eatery on Nov. 13, 2015, were also both Riffian by parentage. (Ringleader Abdelhamid Abaaoud was not of Riffian origin, for what it's worth -- his family came from southern Morocco.)

The article does not offer any analysis of the complex radicalization and indoctrination of these primarily European citizens. Not a single one of these terrorists was radicalized, indoctrinated, or trained in the Rif Mountains. None of them lived, if at all, in the Rif for any extensive period of time. The fact that they, and their parents, were born in one of the most marginalized, poorest regions in Morocco, home to cannabis, contraband smuggling, and violent history with colonialism and the autocratic Makhzen state are indicators enough for Jacinto that the essence of radical religious terrorism gripping Europe and the world today lies in the Rif Mountains.

The general thrust of the article, we are led to believe, is that these Riffians and their parents brought a sort of baggage of alienation and extremism with them to Europe, which facilitated their radicalization, regardless of their early criminal background or individual and communal exclusion in a society that seeks to assimilate them radically as European citizens only.

The Riffian identity and culture, and the "baggage of neglect", as the article contends without any shred of evidence sociological or otherwise, are radicalizing. Placed in a comparative perspective, the author claims that Turkish Belgians are not as militant as Moroccan Belgians, simply because they are not exposed to Arabic Wahhabi literature. Either Jacinto does not know, or prefers to ignore the fact that the Wahhabi ideology has long been translated to many world languages, including Turkish. Moreover, we know that several of these European Muslim terrorists do not speak Arabic and rely on translated videos and literature of radical Islamism. ISIS has also been more successful in recruiting homegrown European terrorists in their own language. But more devastating to the article is the lack of basic facts about the Rif. Riffians are predominantly Amazigh, who are ethnically and linguistically not Arab, and do not speak Arabic. According to the piece's argument, they are as foreign to Wahhabi ideology disseminated in the Arabic language as the Turks are.

The author also makes the feeble argument that the secular cultural history of modern Turkey explains the lack of Turkish terrorists in Europe. No evidence is provided of this - only the conjecture of one of the sources in her article. However, we know that there are a number of Turkish terrorists fighting for ISIS. According to the Soufan Group, there are 2,100 Turkish fighters with ISIS, the fourth largest contingency of radical Islamists after Tunisia, Saudi Arabia, and Russia (not an Arab-speaking country). Jacinto seems to think that all she needs to do is point out that some of the recent terrorists in Europe are from Moroccan-Riffian descent in order to offer conclusive proof of a Moroccan-Riffian radical gene. That is a dangerously false assertion on a number of levels. First of all, these terrorists are more Belgian or French than Moroccan. Some don't even speak the Amazigh dialects or associate culturally or cognitively with their land of origin. Their radicalization happened in Europe and their malaise is a European one of integration and assimilation, legitimized by reference to a violent perverted religious ideology. The problem is located more in European societies where the radicalized Moroccan transplants are liminal individuals with a dangerous sense of identity crisis.

One of the major characteristics of religious terrorism is that sense of alienation in one's society as evidenced by generations of religious extremists from the Christian identity movement at the heart of the Oklahoma City bombing, to the Jewish zealotry of Baruch Goldstein, and the apocalyptic world view of Aum Shinrikyo's perverted Buddhism in Japan. The sense of marginalization of a great number of Muslims feel at home, be it in the Muslim majority states under the yoke of authoritarian rule, or in European countries facing a divisive dangerous identity crisis. These radical outsiders view themselves at the fringe of their socio-political system, where violence becomes a sacramental act justified by ossified religious principles, and legitimized through a reference to a violent eschatolgy.

The article commits the sin of collectivization and cast the whole Rif region as a region of militancy. Rif is among one of the most disadvantaged regions in Morocco, with a particularly bloody history of state violence. But several regions in Morocco feature the same menu of socio-economic ostracism and pathologies, with little or similar recourse to violence.

The fact that there are, indeed, violent terrorists who are born and radicalized in Morocco is irrefutable. After all, there are more than 1200 Moroccans fighting for ISIS according to the Soufan Group. But the facile assumptions underpinning this article by an "award-winning international news reporter," and the sensationalized claim that the Rif is the hotbed of global terrorism today are egregious and devoid of any analytical or empirical value. Radical Islamism is not an ethnic issue, it is a complex set of religious, socio-economic, and identity-based problems. ISIS has reprehensibly demonstrated that violent Islamist extremism knows no national, ethnic, racial or social boundaries. Its sources or hotbeds are only a reality in the mind of frivolous journalists looking for sensationalized headlines.