Last night Alison and I along with others were honored for environmental leadership by the California League of Conservation Voters. Here are the remarks I made.
---- 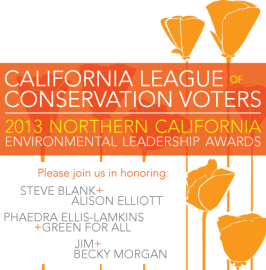 Alison and I both grew up on the East Coast but we've been fortunate to live in California for 30 years. One of the things we love most about living here is how beautiful the natural landscapes are and how close nature is to urban areas. When we had kids, we began to think about our role in protecting these California landscapes for future generations.

As you know, for the last 35 years we've been running a science experiment on the California Coast: How would the Coastal Act affect California's coastal economy?

The results are now in.

California has some of the most expensive land in the country and as we all know, our economy is organized to extract the maximum revenue and profits from any asset. Visitors are amazed that there aren't condos, hotels, houses, shopping centers and freeways, wall-to-wall, for most of the length of our state's coast. 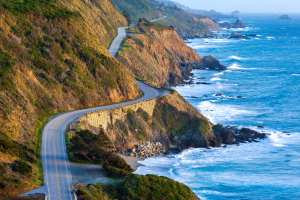 First, to maximize public access and public recreational opportunities in the coastal zone while preserving the rights of private property owners, and;

Second, to assure priority for coastal-dependent and coastal-related development over other development on the coast.

For the last three decades, the Coastal Commission has upheld these directives while miraculously managing to avoid regulatory capture. It was able to do so because of three forces that sustained it: 1) an uncompromising executive director, 2) a majority of commissioners who looked past local parochial interests and voted for the interests of all Californians, and 3) an environmental community that acted as a tenacious watchdog.

The Commission has been able to stave off the tragedy of the commons for the California coast. Upholding the Coastal Act meant the Commission took unpopular positions upsetting developers who have fought with the agency over seaside projects, homeowners who strongly feel that private property rights unconditionally trump public access, and local governments who believe they should have the final say in what's right for their community, regardless of its impact on the rest of the state.

During the last three decades, Peter Douglas ran the Coastal Commission. Unlike Robert Moses who built modern New York City's or Baron Haussmann who built 19th century Paris in concrete and steel, the legacy of Peter Douglas is all the things you don't see in the 1,100 miles of the California coast: wetlands that have not been filled, public access that has not been lost, coastal views that have not been blocked by hotels or condominiums. Douglas did this by standing up to developers, speakers of the state assembly, governors, and others who wanted him to be "reasonable" and to come to a "compromised solution."

I was appointed to the Coastal Commission by a governor hoping to find a candidate with "green enough" credentials who would be "reasonable" and understand how "compromises" are made in California politics.

And for the first few years, I was reasonable. New development, sure -- just avoid the wetland. More condos -- OK but watch out for the Environmentally Sensitive Habitat Areas (ESHA).
I'm a slow learner but over the last few years, I realized that the coast of California exists as it is because the Commission had an unreasonable leader, who refused the political allure of "compromise" and who managed to keep the commission independent despite enormous pressure. And we as commissioners had to stand up to those pressures and be at times unreasonable in order to not compromise the essence of the Coastal Act.

Unfortunately Peter Douglas is gone and his unbending vision to save the coast is fading. Some current commissioners seem to want the Commission to be reasonable, and understand the reality of politics. In fact, some may even want a new "reasonable" executive director who will turn the commission into just another regulatory organization driven by the people they are supposed to regulate.

Sadly, even today with the results of an independent commission in front of us, some of our appointing authorities haven't understood the gift that has been handed them -- 100's of miles of Pacific coastline, much of it unspoiled and accessible to all. And unlike other regulatory agencies, the unspoiled California Coast is finite, and bad decisions are virtually impossible to turn back once a development decision is implemented.

Over the last few years I learned that unless there is a vigilant and engaged public, lobbyists and developers will take over the commission using "reasonableness" and "fair compromise" as their watch words. It is up to individuals and our environmental organizations to become more active on coastal issues.

As Peter Douglas used to say, the coast is never saved, rather it is being saved every day, as an ongoing process"

Unless we insist that our elected officials appoint people who are willing to prioritize the principals of the Coastal Act over both their own careers and the notion of being "reasonable" within the larger ecosystem of day-to-day California Politics, our children may one day look back at pictures of the California coast and wistfully say, "Look what our parents lost."

Today it was with a feeling of a mission yet to be accomplished, I let the governor know that I am resigning from the Coastal Commission. My work on innovation, job creation and entrepreneurship for the Federal Government is taking an increasing amount of my time.

I've had a great time at the Commission. I've learned a lot from my fellow commissioners and hope I've done my part for my fellow Californians. I'd like to thank my alternate Jim Wickett on the Commision who has also dedicated his time and uncompromising votes towards carrying out the Coastal Act.

Most of all, I'm proud to have been "unreasonable" and "uncompromising" in defense of the California Coast. To be anything less risks the loss of what the Coastal Act and Peter Douglas has uniquely brought to all Californians.

Thank you for this award, and I very much appreciate all the support you have provided to me to be able to make my contribution to the California Coast and the Environment. 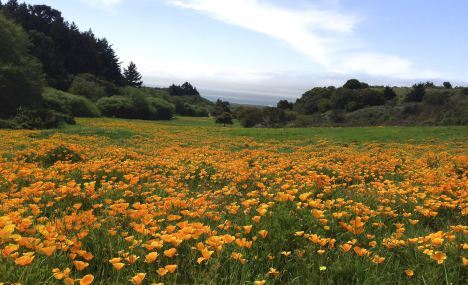