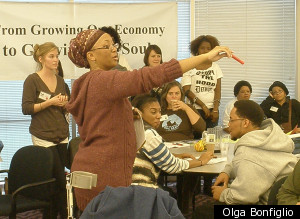 It was a serendipitous weekend of soul-searching, collaboration, information sharing and problem solving as activists "occupied" Detroit, one of the world's most de-industrialized cities, to re-imagine "work" and ways it can reinvigorate local communities.

Over 300 participants from around the country converged on the Focus: Hope facility October 28-30 to address the nation's accelerating decline of the jobs-based industrial economy, where over 14 million Americans are unemployed and another 9.3 million hold "involuntary part-time" jobs, according to the U.S. Bureau of Labor Statistics.

"We never anticipated Occupy Wall Street or the Arab Spring when we planned this conference," said Richard Feldman, from the Boggs Center to Nurture Community Leadership. "Nevertheless, we are here to show the world that Detroit is the place where we can imagine what the 21st century can look like."

Activists in Detroit have been preparing for change long before this year's revolutionary wave of demonstrations and protests in the Middle East, Europe and Occupy Wall Street. Neighborhood leaders were among the first to promote urban gardens, and they started re-visioning the concept of "work" two decades ago when it became obvious that globalization was taking a toll on jobs.

"Something is happening to the world and we see it right here in Detroit," said Grace Lee Boggs, long-time activist, teacher and philosopher. She, with her Chrysler autoworker spouse, James Boggs (now deceased), had been looking at a post-industrial future back in the 1980s as automation replaced workers in the auto plants.

"What was created 200 years ago [during the Industrial Revolution] is coming to an end," said the 96-year-old author of The Next American Revolution. "All over the planet people are pursuing alternatives to the economics of greed, over-consumption and destruction of the eco-system. It is our birthright to create something new."

The conference included an impressive line-up of guest speakers including Ms. Boggs; Vandana Shiva, environmental activist and author from India; Gar Alperovitz, author of America Beyond Capitalism; and Frithjof Bergmann, founder of the Center for New Work and a philosophy professor emeritus of the University of Michigan.

However, much time was provided for community leaders to share what they were already doing and for participants to dialogue about what they could do to transform our economic and community relationships.

Throughout the conference participants distinguished "work" from "jobs." Basically, work is about one's calling in life and contributions to the community while jobs are more about the specific tasks people perform for an organization.

People moved from the farm to the city to take jobs, said Ms. Boggs. They went from making clothes and growing food to buying clothes and buying food. Humans changed from producers to consumers. The models and ideals of work became factory oriented.

"We have to see work as going beyond jobs," said Mama Sandra Simmons, whose opening remarks set the tone for the meetings.

This theme of re-defining our humanity was widely accepted at the conference as the prerequisite for "work." "Jobs" have a dehumanizing effect as people fill interchangeable slots in a big machine. In today's global economy workers can be easily replaced with those willing to work for lower wages. Transformation to any new system of "work" must begin with one's own personal discernment about identity and purpose in this life, participants said.

Former autoworker Gloria Lowe illustrated this point by describing her relationship with veterans with PTSD in her home rehabilitation work, We Want Green Too! The project helps create work for neighborhood craftsmen.

However, before the work began, she invited the veterans to share their pain with each other.

"My compassion, giving, sharing and loving transformed them," she said. "These guys who were spiritually destroyed were then able to stand up tall physically because someone cared about them."

Then, they were able to use their construction skills to rehab homes because they wanted to "give back" to the community they now felt a part of. Participants and speakers emphasized that building relationships with one another also creates supportive and transformative communities as evidenced by the urban gardens movement.

"Growing food is a revolutionary act of love for oneself and others," said Myrtle Curtis, who with her husband, Wayne, founded the Feed'om Freedom Growers community garden on an empty lot in their Detroit neighborhood. "My job was killing my spirit until I decided my work was to become a farmer in the city."

Patrick Crouch, manager of Earthworks Urban Farm in Detroit, talked about his work as something he loved doing even though it was hard and sometimes taxed his body.

"But hard work is its own reward," he said. "I get vitamin D, physical exercise, conversation with others, a spiritual connection with my hands in the soil, and I know where my food comes from."

Yvette Murrell of Detroit uses art, music, theater and yoga to provide youth with a place for healing and leadership in order to address urban ills like racism, poverty, drugs and imprisonment. She also teaches high school students how to become "conflict reconcilers" as an alternative to the schools' punitive suspension system and its reliance on the criminal justice system.

Sweetwater Organics of Milwaukee offers youth an aquaponics program, a cross-disciplinary approach of science, technology, engineering, art and mathematics. Aquaponics is a system where fish and plants are grown together for harvest.

Sweetwater started out working with four schools and in six months attracted 35 schools and four universities as it led students to design an "urban village" that aims to feed itself, said Emmanuel Pratt, executive director of Sweetwater Organics. Today, there are 100 schools between Chicago and Milwaukee involved in this project.

Pratt, who is also director of Chicago State University's Aquaponics Center, is currently converting a 20,000 square foot warehouse at the university into a living laboratory for aquaponics and urban agriculture.

"We need to change the perception of how we see our communities and cities," he said referring to the Midwest's lost industries and neighborhood blight. "Aquaponics provides the chance to envision new 21st century neighborhoods and cities transformed from the Rust Belt to the Fresh Coast."

To do that, Sweetwater is currently raising 40,000-50,000 tilapia and thousands of pounds of lettuce, watercress and basil. Pratt, an architect and urban planner, said that aquaponics can play a key role in urban agriculture by feeding growing populations, while saving the environment through increased water efficiency and smarter land use.

Participants were anxious to interact with one another and conference planners provided them many opportunities, including a two-hour future economy workshop where they divided themselves into four groups (artists/media workers, entrepreneurs, educators, community organizers) to discuss what each group imagines as its work, what help each group needs and what each group can offer the other groups.

For example, artists/media workers know how to work independently, tell stories and express emotion. Educators know how to teach skills and knowledge. Entrepreneurs know how to bring a product to market and make money while community organizers know how to transform spaces, expose truths and work with the media.

This workshop illustrated how collaboration can take place among diverse groups of people who don't ordinarily talk with each other. It also showed how work can take on new configurations when grassroots people focus on community needs and relationships rather than to allow the leaders at the top of a hierarchical organization to decide what must be accomplished and how it will be evaluated.

As exuberant and philosophical as participants were, some expressed concern that discussion about money as a means of regenerating a new economy was often omitted.

"Making money doesn't have to be evil," said Mike Wimberley, founder of the Hope District on the Eastside. He also rehabilitates local housing and commercial properties through Friends of Detroit and Tri-County, a nonprofit organization that his mother, Lily Wimberley, founded in 1994.

"We need to re-populate our city and put down roots so that people have houses, education, health care," he said. "That takes money and we have to figure out how people here can make it."

Other participants mentioned that money should be put back into the community. For example, most people who make their living in Detroit don't reside there, and many major institutions don't make many of their purchases from local businesses. Being mindful and diligent in re-investing money into the community is a way of bringing back the city and helping local businesses succeed.

In another discussion, participants acknowledged that relying on political and economic leaders to lead was a fruitless endeavor because they have forgotten the people they are supposed to represent. A "we have to do it ourselves" attitude permeated the conference in a recognition that representative democracy is in serious decline. Besides, they said, societal change usually occurs at the grassroots level--and rigid social class distinctions and hierarchies have no place in the new economy we are envisioning.

"A gardener isn't better or worse than a doctor," said one man.

Shaun Nethercott, founder and executive director of the Matrix Theatre, expressed the same sentiments from another point of view.

"In Platonic idealism, which is completely infused in European economic, political and social structures, 'the idea' has more value than 'the practice,' the mind is more important than the body, the planner is more important than the maker. This is why an architect makes more money than a carpenter, why a doctor has higher status than a nurse, why CEOs have more value than anyone working in his company. It is why we value humans more than animals, and animals more than plants."

Treating people as human beings is essential, especially those who have been disenfranchised by losing their jobs, their homes, their health or their status through some form of discrimination.

"As a city, we have unique things to teach," said Shea Howell, one of the conference organizers. "[As a global center of industrialization] Detroit was in the front line of dehumanization and we have a lot of experience behind us to respond."

The "Reimagining Work" conference was launched by the Boggs Center to Nurture Community Leadership, in partnership with the East Michigan Environmental Action Council, Allied Media Conference, Detroit Coalition Against Police Brutality, Putting the Neighbor Back in the 'Hood, Damon Keith for Civil Rights and Focus: Hope.

Olga Bonfiglio is an author and activist based in Kalamazoo. She blogs at www.olgabonfiglio.blogspot.com. If you would like to contribute to Off the Bus, the Huffington Post's platform for citizen journalism, please sign up at www.offthebus.org.