Pull out your checkbooks, animal lovers with uncovered floors: a Florida police agency's famed, typo-afflicted "In Dog We Trust" rug is being auctioned off to benefit a local dog rescue group and sanctuary.

This fantastic rug came about by accident. The Pinellas County Sheriff's Office paid American Floor Mats $500 for a rug that was supposed to proclaim confidence in a supreme being, instead of man's best friend. (Another rug, ordered at the same time, was printed correctly.)

The mistake was discovered some months later, and the rug was ferreted out of sight -- but definitely not out of mind.

The Pinellas County Sheriff’s Office will not “sweep anything under the rug.” Due to extensive interest regarding our plans for the “doggone” rug, you can bid on it here, and we will donate 100% of your bid to a local animal rescue. 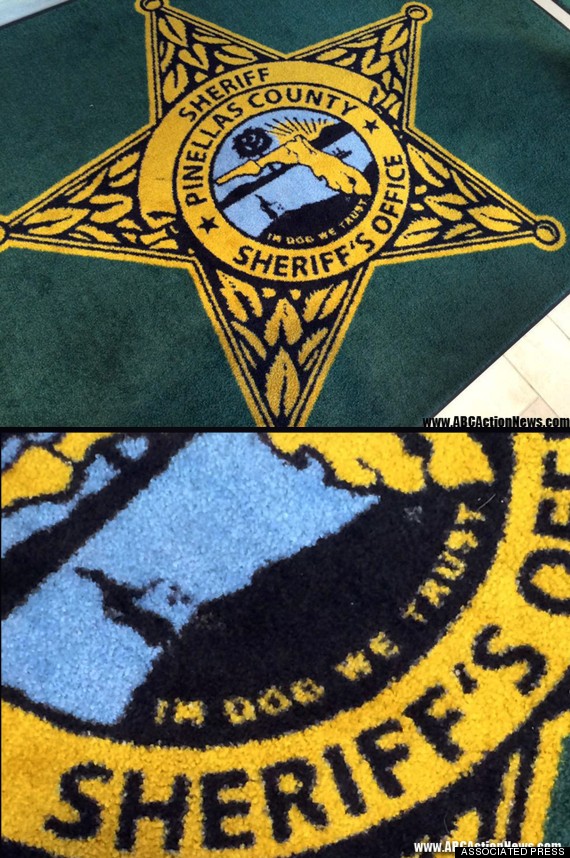 Sheriff Bob Gualtieri told a local ABC affiliate that since a reporter first noticed and tweeted about the misspelling earlier this week, his office has been getting calls from all over the world.

“The biggest concern I was hearing from people was, ‘Oh my God, don’t throw it away,” Gualtieri said.

Indeed. While the auction started at just $100, bids for the rug had already gone over $2,600 as of Friday afternoon, with all that money destined to help an area nonprofit called Canine Estates, Inc.

Sidwell said that she thinks her group -- which is currently caring for 30 dogs, with another 10 due in soon -- was chosen because Gualtieri adopted a 13-year-old dog from them last year.

"Annabel Lee. A Maltese mix with an underbite. From what I understand, she and the Sheriff watch sports together," she said.

The auction closes at 4 p.m. next Wednesday, Jan. 21 -- which may well be your last chance at getting your hands (and feet) on this perfect piece of home decor.

An American Floor Mats customer service agent, who declined to give his name, said the company's been "getting a lot of calls" about the rugs in the last couple of days.

Alas, those people are out of luck.

"I don't believe we are going to be reproducing the mats," he said.

You can bid on the In Dog We Trust rug at onlineauction.com, and find out more about Canine Estates on Facebook.