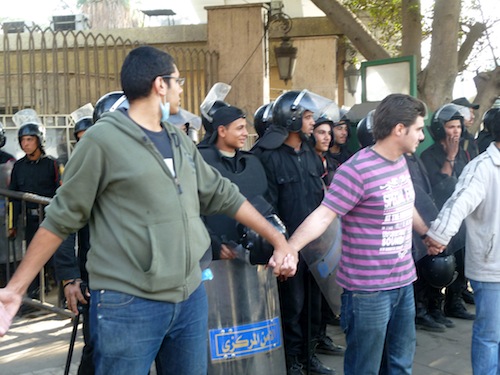 At 1am on Saturday, January 29, I watched from the balcony of my Cairo apartment as a mob of young men with crude weapons smashed and looted the Radio Shack store next door. The building's guards shot a rifle vainly into the air, the report so close that it rattled my bones. This was the first moment in the unfolding uprising in Egypt when I realized things were deadly serious. Chaos descended; gunshots crackled throughout the night as looters and shop owners clashed all over our neighborhood.

I would learn later that these trouble-makers were most likely paid by the government to sow chaos so the people would demand that Mubarak remain in power and restore calm. It is one of the regime's tried-and-true tactics (along with pulling the police off the streets at such times, which may explain why they had mysteriously disappeared that night).

The tactic did not work this time, however, and the most amazing thing about the last two weeks in Cairo is that the city's residents not only did not feed into this chaos, but denied it at every turn. In a city of almost 20 million souls, many of them desperately poor, the vast majority have shown that there's no need for an iron-fisted strong man or a brutal police force. In the face of chaos, they have proudly governed their own turf, behaving with responsibility, composure, bravery, and kindness.

Take, for example, the citizens who took it upon themselves to direct traffic in the absence of the usual traffic cops, or the group of men on our street who organized to keep watch all night, every night. These committees formed organically throughout Cairo, led by the bowabs, men whose job it is to care for and protect the city's buildings. In Zamalek, a neighborhood on the island in the middle of the Nile where my husband and I went to stay with friends, the protection committees worked all night in three-hour shifts, guarding make-shift roadblocks at regular intervals and coordinating with each other to keep the streets preternaturally quiet and calm. Those of us who holed up in Zamalek's apartment buildings owe those men our safety and our sanity.

The protesters themselves have displayed an admirable level of restraint and even generosity toward those they are battling. In an incident during the early days of the protests, a few dozen riot police were separated from their retreating battalion as tens of thousands of protesters streamed across a bridge. When the separated police found themselves surrounded and vastly outnumbered by a mob of demonstrators, some calling for blood, peace-minded protesters stepped between the groups, linking hands to form a human chain. When asked by a journalist why he was protecting the police, one young man in the chain explained that these officers are just poor men doing their jobs. They are Egyptians, too, he said.

That unifying spirit has been on display throughout the events in Egypt. Women in Tahrir Square have reported a notable absence of the sexual harassment they usually face in Cairo's streets. Children have been present, waving flags and chanting with the best of them. Sectarian schisms seem to be nonexistent. In fact, Christians stood guard while Muslims prayed in Tahrir Square, the Muslims returning the favor the next day.

Those who want to help the protesters in their fight have been volunteering to bring food, water, and medicine, sometimes at grave risk. My friend Rana, a courageous woman who has alternated between protesting and volunteering with several organizations to bring in supplies, was stopped by pro-Mubarak thugs on her way to Tahrir Square with a bag full of first-aid materials on Thursday, February 3. Brandishing their swords and guns, the men searched her bag for cameras, money, or weapons and demanded to know whom the supplies were for. Rana lied, telling them she was provisioning pro-Mubarak supporters, and the men let her and the three other volunteers with her pass.

"I lied to live," Rana told me in an online chat, then added in her charming English: "You can't imagine how scary they was. The man who was with us, he was close to get heart attack." The youngest among them, a 17-year-old woman, fainted from fright under the impression that the men might rape her. Rana managed to help her off the bridge and into Tahrir Square, where she revived and found her place among the protesters. "Now she call me to say that she will be going to protests every day," said Rana.

Rana herself has felt from the very start that there is no turning back. Despite her own work grinding to a halt and pressure from colleagues anxious about their livelihoods, she will not stop protesting. "I'm totally different now," she told me. "It feels different to be in the street and going there carrying your soul and you know that you may die or be hurt for Egypt."

In the United States, despite our country being born of revolution, it is hard to appreciate the profundity of what the people of Egypt are going through right now. But the amazing way they are banding together to help each other and demand a new government, makes it clear that we are witnessing something rare and remarkable. Hope is in the air. Empowerment breeds respect for oneself and others. As Rana said of this new era dawning in her country, "you feel like you're reborn again."