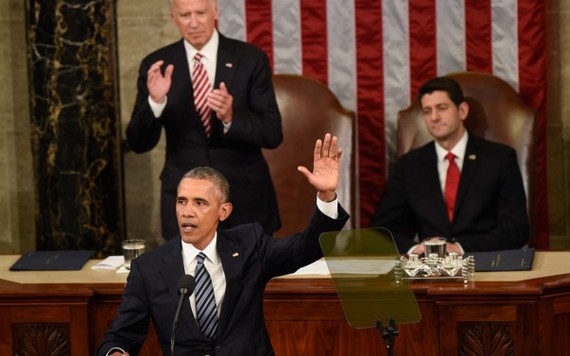 In his final State of the Union Address, President Barack Obama handled things a lot differently. Instead of laying out a laundry list of unachievable policies and promises, President Obama used his final address to Congress to speak to America's challenges and opportunities for today, tomorrow, and for generations to come. In his speech he made it clear that if we work together now, we'll keep building a future even more remarkable than our past.

Last night, Obama had the impossible job of trying to bring together a nation that has been torn part by high flying rhetoric, misguided presidential hopefuls, and the emergence of a new era of bigotry and hate. But with a cool, calm, and collected tone, this president delivered once again.

With income inequality at an all-time high and racial harmony at an all time low, the President's speech was one crafted and delivered to bring the nation together. And let's be real, even though we have a divided and gridlocked government there are areas where Republicans and Democrats can work together. The President highlighted a couple of those areas in the first two minutes of the speech." I hope we can work together this year on bipartisan priorities like criminal justice reform, and helping people who are battling prescription drug abuse. We just might surprise the cynics again," he said.

Our economic situation has improved quite a bit over the past seven years: More folks are heading back to work. More students are graduating high school and college. More folks have access to healthcare. And we are all paying less at the pump. Yet still, President Obama addressed a nation where folks are uncertain of the future and fear that the American dream is out of reach.

Throughout the speech, we heard from an honest, calm, and collected Obama. Instead of bashing Republicans, he urged the entire Congress to see beyond its differences and chart a new course of economic opportunity, technological innovation, and cooperative rhetoric in Washington.

For almost seven years, the president has acted on the belief that the full spectrum of American power should be used to move our national security interests forward and that diplomacy makes us safer than going it alone. Here at home, he believes that our democracy and economy works best when all citizens are engaged in the effort. For seven years, Obama has reminded us that we are a country that overcomes, innovates, creates, and seizes the future - a people who believe in the power of hope and change to push us towards progress and prosperity.

And while he is not the cause for most of the division and gridlock in Washington, the president was even bold enough to take some of the blame, stating: "Our public life withers when only the most extreme voices get attention. Most of all, democracy breaks down when the average person feels their voice doesn't matter; that the system is rigged in favor of the rich or the powerful or some narrow interest. Too many Americans feel that way right now. It's one of the few regrets of my presidency - that the rancor and suspicion between the parties has gotten worse instead of better."

Over the past seven years, many have bashed this President for not being strong enough, for not exercising enough force, and for not bringing our economy back. Last night the President graciously answered all the critics. He ticked off many of his accomplishments both foreign and domestic, and urged the citizens of America to rise above cynicism and fear, and affirm hope for decades to come.

I have covered this speech from the capitol building for the past four years and I can honestly say last night I felt something different. I don't agree with the President on every policy position he puts out. But I do believe it is time for our nation to come together and put aside the self-imposed barriers that divide us.

Richard Fowler's YouTube and radio show can be heard in more than 9.1 million homes. He frequently appears on Fox News, MSNBC, and C-SPAN. He is also a Senior Media Fellow for the New Leaders Council. Follow him on Twitter @Richardafowler