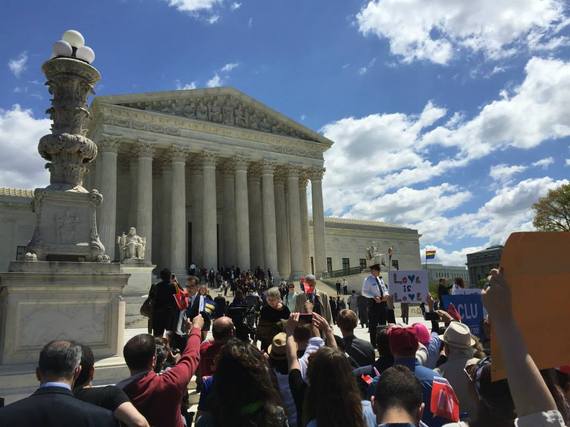 The giddy atmosphere outside the Supreme Court Tuesday afternoon was only slightly more festive than the mood in the courtroom itself. As expected, civil rights legend Mary Bonauto knocked it out of the park for marriage equality. But something bigger was in the air -- a sense that history wasn't just turning but had, in some basic sense, turned.

It wasn't only that the other side's arguments have imploded, though there was that.

John Bursch, the Michigan lawyer charged with defending discrimination, spent most of his time arguing that gay people marrying will somehow convey that marriage is now about couples rather than children (despite the hundreds of thousands of gay families raising kids), which in turn will cause straight people to have more children out of wedlock.

Also, if a woman weighs the same as a duck, she is made of wood and is therefore a witch.

Bursch did, however, avoid the ever less plausible argument that the freedom to marry is somehow anti-religion -- no doubt aware of the quickening embrace of equality by mainstream denominations and millions of religious Americans. That didn't stop Justice Scalia from repeatedly insisting that ministers could be forced to perform same-sex wedding services as a condition of exercising civil marriage authority. You know, like rabbis are now forced to marry interfaith couples.

That, and a few lingering questions on polygamy, is really about all they have left.

Beyond the lopsided merits, there was a powerful sense in the courtroom that our community has broken through. Even the conservative justices engaged seriously and respectfully (well, Scalia will be Scalia). And a majority of justices bluntly stated their impatience with arguments that fail to recognize the dignity and equality of gay families. It felt like a cultural moment had arrived -- confirmation of acceptance and respect that would have been unthinkable a generation ago. 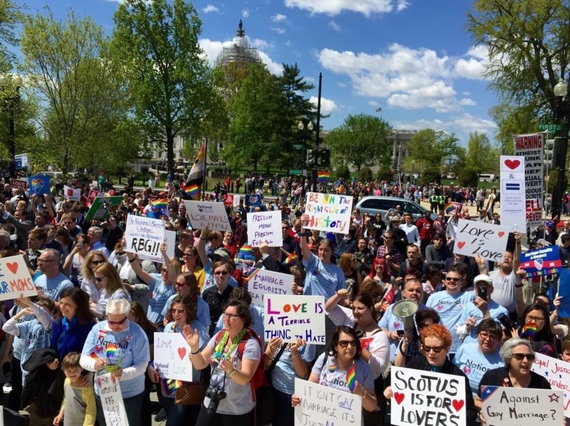 Contrast the 1986 oral argument in Bowers v. Hardwick, in which a constitutional challenge to criminalization of private intimate conduct was mischaracterized as being about a "right to commit sodomy" and constitutional scholar Larry Tribe was peppered with hypotheticals about sex in public toilets. I wasn't there for Bowers, thank goodness, but at three other oral arguments over the last fifteen years (all in cases where my firm submitted briefs), I was privileged to witness progress unfold towards Tuesday's culmination.

First came Dale v. Boy Scouts, in 2000, in which Evan Wolfson (also basking this week in well-earned marriage glory) faced down a skeptical Supreme Court on behalf of James Dale, an Eagle Scout and junior scoutmaster tossed from Scouting when he came out in college. In those days, the Scouts still argued that only heterosexual boys could be "clean" and "morally straight," and LGBT advocates felt compelled to submit social science briefs explaining that gay people were not mentally ill pederasts -- what we used to call the "Homo 101" brief.

On the ground, Dale was a game changer, jump-starting awareness of the irrationality of antigay discrimination. But sitting in court, there was a sense of uphill effort as the justices seemed more concerned with protecting Scouting's right to enforce its own moral code than with preventing discrimination -- previewing the Court's ruling that the Scouts were a private association immune from civil rights regulation.

Just three years later, when Lawrence v. Texas came before the Court, much had changed. Seventeen years after Bowers, sodomy laws appeared even more obviously archaic, and the issue presented no First Amendment complications. The cause was now represented by Paul Smith -- an openly gay law firm partner well known to the justices as a former law clerk and SCOTUS regular.

The argument this time felt more like a tutorial than a battle for respect. There were still some wince-worthy moments -- as when Justice Scalia asked Smith whether states could bar gay kindergarten teachers to keep kids off "the path of homosexuality." But Smith's insider status made it easier for him to tell the Court how wrong they had gotten it in Bowers -- reframing the issue in universal terms tied to fundamental American values of privacy and autonomy: "Most Americans would be shocked to find out that their decision to engage in sexual intimacy with another person in their own home might lead to a knock on the door" and a criminal prosecution.

The Court listened. Justice Kennedy's majority opinion struck down the Texas law as a violation of personal liberty and expressly overturned Bowers. The Court confirmed that gay people, like any other group, are entitled to respect for their intimate, private choices and free to invoke Constitutional principles "in their own search for greater freedom." Justice Scalia's dissent lamented -- presciently -- that rejecting moral disapproval as a ground for sodomy laws also eliminated the main argument against recognizing the freedom to marry for same-sex couples.

How right he was. Of course, work on marriage equality (masterminded by trailblazers Bonauto and Wolfson) had already begun years earlier in Hawaii, Vermont, and of course Massachusetts, where same-sex couples began marrying in May 2004, less than a year after the Lawrence decision. 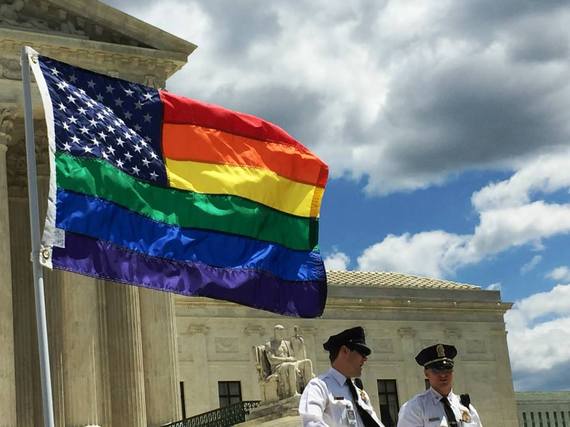 It took nearly a decade to get back before SCOTUS, as marriage equality advanced in fits and starts in courts, legislatures, and ballot referendums across the country. By the time United States v. Windsor hit the Court in 2013 -- challenging DOMA's federal recognition ban -- the tide had shifted, with nine states allowing marriage and public support topping fifty percent.

That momentum was reflected at oral argument, where the pro-equality side for the first time seemed to have the upper hand right out of the box. Even before Robbie Kaplan rose to argue for Edie Windsor, Justice Ginsberg had set the tone with her "skim milk marriage" quip and Justice Kagan had stopped Paul Clement's defense of DOMA in its tracks by showing that Congress had been motivated by the kind of moral disapproval rejected in Lawrence. This was followed by U.S. Solicitor General Donald Verrilli arguing DOMA's unconstitutionality on behalf of the Obama administration.

What a change from Evan Wolfson's brave, solitary stand. When Kaplan took the podium, it was Chief Justice Roberts who seemed on the defensive -- acknowledging what Kaplan described as a "sea change" in attitudes towards gay families and noting that politicians were "falling over themselves to endorse" marriage equality. When he tried to flip the issue and suggest that the gay community was now too powerful to require heightened constitutional protection, Kaplan recounted lost marriage battles and other recent discrimination -- driving home that the "sea change" was a product of evolving moral understanding rather than political clout.

Windsor, of course, struck down the federal recognition portion of DOMA and sparked an astonishing two years of further litigation, legislation, and public education in which marriage has grown from nine to thirty-seven states and public support for the freedom to marry has hit sixty-three percent nationwide.

All of which brought us to Tuesday, where the argument felt even more one-sided than Windsor. Bonauto, with her trademark quiet intensity, eloquently set forth how exclusion from civil marriage needlessly demeans and harms gay people and their families. The conservative justices pushed back on the length of time marriage had been limited to different-sex couples, but Bonauto explained other ways that marriage has evolved over time and evoked Lawrence in arguing that "times can blind and it takes time to see stereotypes and to see the common humanity of people who had once been ignored or excluded."

And as to the perennial question of "who" gets to decide marriage, Bonauto beautifully summed up that "it's not about the Court versus the States. It's about the individual making the choice to marry and with whom to marry, or the government."

There was some anxiety when Justice Kennedy, too, questioned changing a definition of marriage that had been around for "millennia" (actually, not true) -- but he later re-emphasized the concern he expressed in Windsor for the well-being of children of gay parents and his moral understanding that same-sex couples seek to share in the "nobility and sacredness of marriage." 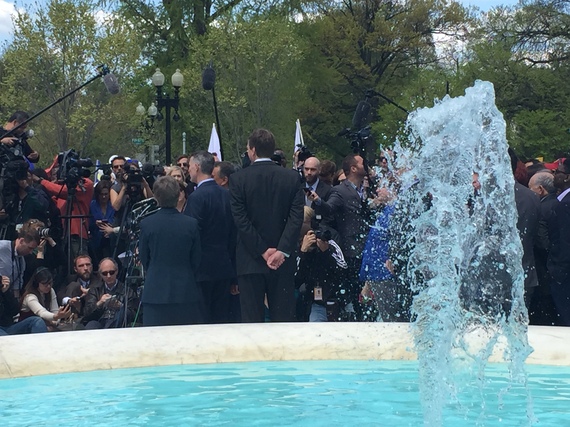 No one wants to jinx it, but most observers expect another favorable 5-4 vote and have the champagne on ice for the kind of emotional celebration that marked Pride 2011 (when marriage was enacted in New York) and 2013 (following the Windsor decision).

Winning marriage is, of course, just a step along the road to justice. Marriage doesn't serve everyone equally, and there is plenty left to do to protect LGBTQ youth and elders, achieve equality for our trans and genderqueer neighbors, and advance broader social justice. For many of us in D.C., the events in nearby Baltimore gave the day a bittersweet flavor. That doesn't mean we shouldn't savor this moment of impending triumph, but let's keep it in perspective: no rest until everyone is free, safe, and equal.