I am eager to respond to the article "'The Way People Look at Us Has Changed': Muslim Women on Life in Europe" that appeared in the pages of the New York Times on September 2, and which paints an intolerable picture, as it is false, of France, the country of lights and of liberties.

France, as all countries, knows racism. And I am in no way ignoring xenophobia, anti-Muslim acts that can occur in my country. It is not an exception. These evils, as well as anti semitism -- in the United States, many know my fight against this plague -- and anti-Christian acts, are hitting Europe as well as America. France fights these relentlessly.

What I argue here vigorously is that the New York Times article, giving the floor to women of Muslim faith, claims that their voice would be smothered in France, so as to portray a France that oppresses them. This article also does not explain what the republican principles are: liberty, equality, fraternity, and the secularism of the French.

Through its history, its geography, its location on the Mediterranean basin and so close to the African continent, and through its immigration, France has a very strong connection with Islam.

The accounts in the article follow one another, describing a France where "the yellow moon" stitched on the clothes of Muslims will be the next phase, as there was a yellow star to designate the Jews under Nazi occupation. A France where Muslims would be "viewed less positively than dogs." A France with a regime of apartheid that forces Muslims to leave their country to study, find work, make a career.

Through its history, its geography, its location on the Mediterranean basin and so close to the African continent, and through its immigration, France has a very strong connection with Islam. It prides itself in Islam being the second religion of the country. Millions of citizens of Muslim faith or culture who live here respect their duties, and fully enjoy their rights. 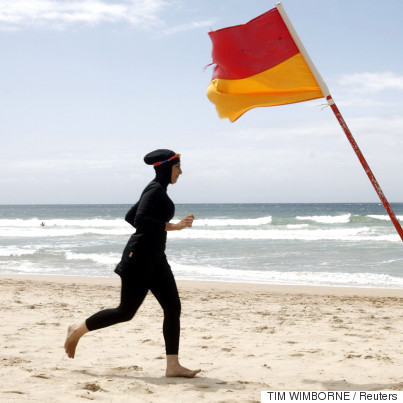 The Muslim women whom this article has given voice to express only one point of view. They are free to express it. But the New York Times journalist should also have been required to interview the vast majority of Muslim women who do not identify with an ultra-vigorous vision of Islam.

This is not a field survey, allowing for different perspectives or nuance in the analysis. These accounts were for the most part obtained following a scandalous event organized in France: a "decolonization summer camp." A camp that -- and this information has its own importance -- was banned, I quote, to "people with white skin." Its goal was to bring together all the supporters of communalism, all those opposed to the mixture of "white" and "non-white" people, all those who seek, I quote again, to denounce the "philo-semitism" of which France would be a victim.

This initiative, far from being an isolated case, puts in plain sight the proselyte contestation that is taking place in France. They seek to defy two of the fundamental principles of our country.

Come on! It is precisely for freedom that we are fighting.

The first principle is the equality of women and men. We must have open eyes to the growing influence of salafism, which contends that women are inferior and impure and that they must be sidelined. This was the question, absolutely not anecdotal, that was at the center of the debate around the burkini and the burqa. It is not an insignificant bathing suit. It is a provocation of radical Islam, which is emerging and wants to impose itself in the public space!

Constantly reading the international press, I have seen how a large number among them have hastily concluded that this is stigmatization, and an act against the freedom of Muslims to practice their religion. But come on! It is precisely for freedom that we are fighting.

We are fighting for the freedom of women who should not have to live under the yoke of a chauvinist order. The female body is neither pure nor impure; it is the female body. It does not need to be hidden to protect against some kind of temptation. See the unbelievable reversal: in the cited accounts, the burkini is presented as a tool of women's liberation! We can read the following there: "When the burkini appeared, I was happy for my sister, who was on vacation and could finally play on the beach with her children rather than needing to stay in the shadows." For another, to wear the veil signifies: "the reappropriation of the body and its femininity..." It's masculine domination that has been completely integrated here!

Secularism is the right of each person to believe or not to believe: the freedom to practice their religion on the condition not to impose its practices or beliefs on others.

In France, we consider that a woman who wants to swim should not remain in the shadows. That women cannot be the object of any domination. And there is certainly masculine domination when it is judged that a woman's body should be removed from the public space.

We fight for the freedom of the majority of Muslims who do not identify with this proselyte minority who manipulate their religion. It is for this reason that the state should not yield an inch to radical Islam.

The second principle -- and it is connected -- is that of secularism. I know that this French singularity is not well understood outside of France. Therefore I want to explain, again, what it is.

Secularism is the right of each person to believe or not to believe: the freedom to practice their religion on the condition that it does not impose its practices or beliefs on others. Secularism is not the negation of religion. It simply imposes a very clear separation between what belongs to the worldly and the spiritual. What does it mean with respect to justice? That the state and its civil servants are strictly neutral, that they do not identify with, finance, or privilege any religion.

France has its heart set on harboring modern Islam, true to its message of openness and tolerance.

In the course of its long history, France has known religious hatred, it tore the country apart in atrocious wars. The Republic and secularism put an end to centuries of conflict. Secularism is that balance requiring mutual respect. A balance that is the guarantor of the cohesion of our society.

The enemies of secularism seek to portray it as an instrument of discrimination and humiliation. Nothing could be more false. The banning of wearing of conspicuous religious symbols in public schools concerns the kippa as much as the headscarf or the Catholic cross. Muslim women can wear the veil in their daily life. But when they are civil servants, they must remove it while doing their work.

The conviction on which the French nation is based is that to have free and equal citizens, religion must fall under the private sphere. France, in this respect, different than other countries, does not see itself as a juxtaposition of communities with each having their own autonomous process. To say it in another way: We do not view the French identity as something ethnic.

The French identity is a bond to want to share the same destiny. It is for this reason that radical Islam attacked us, in Paris, Nice, or Saint-Étienne-du-Rouvray.

France will always defend reason and freedom of conscience in the face of dogma. Because we know that otherwise there is fundamentalism and intolerance would prevail. France has its heart set on harboring modern Islam, true to its message of openness and tolerance. We protect our Muslim citizens against those who want to make scapegoats of them. Where the extreme right wants to see Muslims as second rate citizens, we want, on the contrary, to make it resoundingly clear that Islam is totally compatible with democracy, secularism, and the equality of men and women. It is the most stinging blow that we can deliver to radical Islam, which aspires to only one thing: to set all of us against one another.