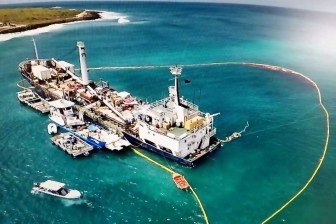 Wreck Bay in San Cristóbal Island is again living up to its name. On Wednesday, Jan. 28, the cargo ship Floreana ran aground on its west side, not far from Punta Carola, the place where another freighter, the Galapaface I, hit the rocks in May 2014. And these accidents bring back memories of the Jessica, an oil tanker that also ran aground in Wreck Bay in 2001, spilling 175,000 gallons of diesel and fuel oil. It was ranked as one of the worst environmental disasters in Galápagos history.

The Floreana was carrying 1,925 tons of cargo, which included food, supplies, construction materials, and some hazardous substances, such as 10,000 gallons of fuel, 11 tons of pinion oil, 103 gas cylinders, 48 tons of asphalt emulsion, and other materials, according to a bulletin issued by the Provincial Government of Galápagos.

After discharging 525 tons of cargo destined for San Cristóbal Island, the Floreana was leaving for Santa Cruz Island with 1,400 tons of cargo onboard when it hit bottom. The provincial Emergency Operations Committee was promptly activated, and efforts started to secure the vessel and unload its cargo.

In a press release, the Directorate of the Galápagos National Park and the Environmental Ministry reported the next day that they have placed containment barriers and absorbent material around the Floreana to prevent possible discharge of pollutants into the bay.

Park rangers and Ecuadorian Navy personnel constantly monitored the area and reported the presence of contaminating material, a mixture of diesel and hydraulic oil, among other substances, due to the flooding of the engine room of the vessel. In addition, according to a park communique, "The Galapagos National Park boat monitoring the area noticed that fuel leakage is increasing." Samples were taken by park technicians and will be flown to Quito, the capital of Ecuador, for scientific testing. Until there is evidence that the contamination has been contained, the park has closed three surfing spots near the incident area.

According to reports on Facebook by Galapagos-al-Dia and in the daily newspaper El Universo, barges, cranes, tugboats and other equipment were moved to San Cristobál Island from Santa Cruz Island, and from the Ecuadorian mainland, in order to accelerate the unloading operations.

On Sunday, Feb. 1, the Emergency Operations Committee (COE) of the Governing Council of Galápagos issued a press release informing that the owner of the stricken vessel had hired T & T Marine Salvage to complete the operations of stabilizing the vessel and unloading the 800 tons that remain onboard, which include cement, beer, iron and perishable products. Once that is completed, the Floreana will be scuttled in an area outside the marine preserve. 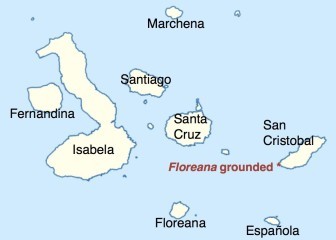 Close to 30,000 people live in the archipelago and depend almost entirely on supplies transported by ship from the continent. Now that supply line has been cut short once again. In addition to the accidents of the Galapaface I and now the Floreana, another ship that made the run, the San Cristóbal, sank near the Ecuadorian coastline on November 17, 2014. These accidents caused monetary losses for merchants in the islands and affected the islanders due to shortages and price increases for many items.

According to the Provincial Government Council, arrangements have been made to have the Ecuadorian Air Force fly perishable goods to prevent shortages. Council President Maria Isabel Salvador warned merchants against increasing prices. Ms. Salvador also announced in a radio interview that a new freighter is being purchased to serve the islands. In addition the council is requesting that an official emergency be declared in the archipelago to help ensure that the islands are properly provided food, fuel and other essentials.

This latest incident has again caused consternation among island residents. Many have taken to social media such as Facebook to express their concerns.

What is the condition of the freighters? We know they are old, outdated and lacking in security, how do they get the respective permits that allow them to operate? Are there Emergency and contingency plans? We applaud the immediate efforts but once this situation is remedied, we must search for long term and in depth solutions.

Many posts complain about the lack of enforcement and follow-up by the authorities in charge of navigation in the fragile Galápagos environment. Ernesto A. Vaca Norero, who, until last year, led the government's risk assessment unit, had this to say:

This vessel had a similar accident last year in the same place, same captain? We provided equipment to pump out the water and avoid a disaster.

It would be logical to have an experienced pilot in addition to the ship captain. This is included in the maritime regulations but there is no compliance.

Another comment referred to the site in a semi-humorous way: "It is not called Wreck Bay for nothing."

To which somebody quickly responded, "Do not blame the bay, it is the responsibility of the captain."

Others added that there should be buoys marking the navigable channel, and tugboats in each harbor.