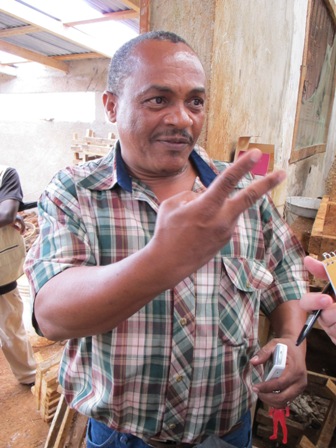 Chrisner Roche has sent his children to school in Port-au-Prince, far from where he lives, because there are few good schools in Haiti's rural areas.

The plight of Chrisner Roche is a textbook case for all that's wrong with the educational system in Haiti.

As rain pelted the metal roof, Roche lifted specimen jars from a shelf, ticking off their contents and examining the embryos one by one. This was a rabbit, that one a pig. Here was a goat. And here was a whole jar of intestinal parasites, grown long and fat.

We were in the common room of the Centre de Salignac, an agricultural research, training, and local development facility high in the hills of Nippes in southern Haiti. A complex of stone-walled buildings, the center works with local farmers to produce high-quality seeds and cuttings, and is a source for the tens of thousands of yam cuttings Oxfam Quebec has distributed to farmers across Haiti.

Roche is the Salignac's director and the rural life seems to suit him: He has been connected with the center since 1978 and has been working in the area since he finished school. But he's here alone among the rolling green hills and open sky--without his wife and children.

They're far off, in Port-au-Prince, where he can be sure the kids will get a solid education. Way out here, good schools are few and far between. And that's one of the biggest impediments to the hope many have for decentralized services and a robust rural economy--goals some have set their sights on following the devastating earthquake that destroyed so much of the capital in january. Without schools, or other essentials such as reliable electricity and decent roads, Haiti's rural areas hold little attraction to people looking for opportunities for themselves and their families.

About a quarter of Haiti's districts have no schools, and all of those districts are in rural areas. The vast majority of schools in the country--80 percent--are privately run and many schools don't even have the most basic amenities including sanitation, classroom equipment, or supplies for students. Still, fees and tuition at many of these places are often more than most families can afford when the average per capita income is $414.

That explains why 8-year-old Noel Jolins was working side-by-side with his mother, Marie Camel Rubin, weeding a large field of manioc, corn, and beans in Paillant yesterday afternoon. Bent at the waist, the pair made their way slowly along one row, with many to go. Noel's mother, a thin woman with a warm smile, said that her son had to quit school because she didn't have enough money to continue sending him. She offered that information as though it were the top thing on her mind: it spilled out, a longing that she could do nothing about.

Education is one of the basic services rural areas are crying out for--and it's key to the long-term rehabilitation of Haiti. Though Oxfam itself does not work in the educational arena, we'll be advocating for increased investment in rural schools so boys like Noel will have the chance to continue their studies and make their own choices about their futures.

In my mind's eye, I've been seeing Rubin's stern expression as she posed for a picture, and the serious look on the face of her son standing close to her, his fate sealed in that field. I was thinking about them when we pulled into a hotel in Petite Riviere de Nippes that evening and there, hunched in their chairs, was a small crowd of school children each with their own sturdy green and white laptop. They had come to the hotel to borrow its electricity--kindly offered by hotel owner Emmanuel Pressoir--and his wireless connection. Their town has neither. They looked up just briefly, and smiled in a distracted way when I asked if I could snap their picture, before getting lost again in their on-screen projects.

It turns out that the computers are part of an initiative their school--Complexe Education St. Antoine et St. Augustin, just down the road--launched last year as a pilot, expanded this year with 50 more computers, and will grow again in the summer when 200 additional laptops arrive. The machines are part of the One Laptop per Child program founded by MIT professor Nicholas Negroponte.

Pressoir plays a role in the American Haitian Foundation which helps to fund the school, where he also serves as treasurer. Painted bright pink, the school has about 900 students in grades one through 12--and offers each of them a meal every day, no small gesture in a country where many people struggle to feed their families.

For Pressoir, feeding minds is essential, too. And that's why he's happy to let the kids come to his salt-splashed rotunda by the sea, plug into the rusty outlets, and dive into their laptops.

"It's not only looking on the Internet," he says. "It's developing their minds."

That 's a mantra that all of Haiti could use.