For the fourth year in a row, Catholics in Harlem convened an ecumenical and interfaith celebration in honor of Dr. Martin Luther King, Jr., inviting local Christian and Muslim clergy to join them.

Co-sponsored by the Central Harlem Vicariate, The Office of Black Ministry of the Archdiocese of New York, and the New York Support Group of the Martin Luther King, Jr. Center for Non Violent Social Change, the service was held at St. Joseph of the Holy Family Church. Highlights included the powerful voices of the Vicariate choir, liturgical dancers, and a keynote address by Rev. Al Sharpton, founder of the National Action Network, a leading civil rights organization. The Vicariate also invited a Muslim reflection from Imam Al-Hajj Talib 'Abdur Rashid of the Mosque of Islamic Brotherhood, a center that is a descendant of the Muslim Mosque, Inc. established by Al-Hajj Malik Al Shabbaz (Malcolm X). 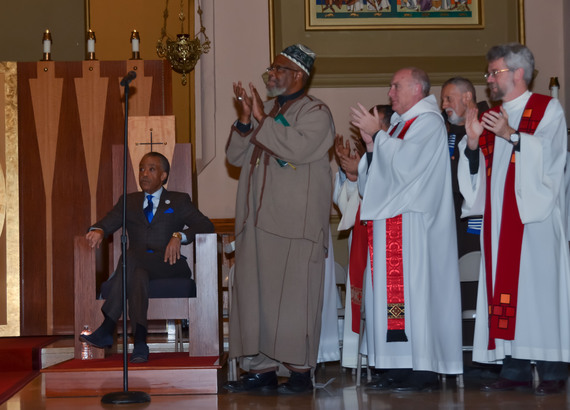 Commenting on today's economic and racial inequities, Imam 'Abdur Rashid evoked Jesus as the Prince of Peace who also stood firmly for justice when he "overturned the benches and chased the usurious money changers out of the synagogue." He noted that non-violent resistance is "nonetheless, still resistance," and that "we're not in the promised land yet." He drew attention to the significance of an interfaith celebration by referring to shared prophets of the Bible and Quran, including Jesus, and to interfaith supporters of Dr. King, such as Rabbi Abraham Joshua Heschel.

While "Dr. King never had the chance to work in a coordinated, strategic, programmed way with Malcolm X, they worked in tandem and inspired masses of African Americans in the struggle for justice," he stated. Referring to the "once in a lifetime photograph of those two giants - one a Christian, and the other a Muslim, shaking hands and smiling warmly, modeling love and respect though they differed in some of their theological teachings and strategic tactics in the struggle for freedom, justice, and equality," Imam 'Abdur Rashid was sure that "if those two great leaders had lived longer.. and not been martyred at the age of 39...they would have found a way to work closer together." 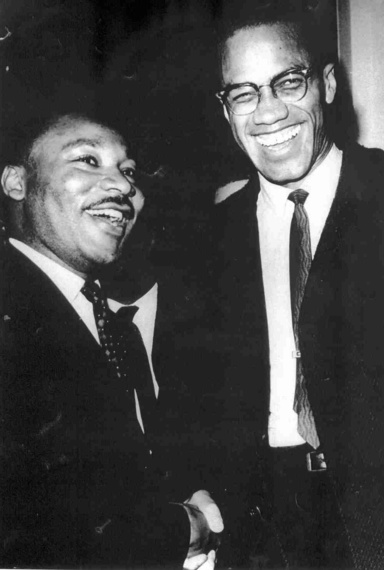 Rev. Sharpton challenged the audience on how people get caught up in materialism, losing their focus on the struggle for justice. A good example, he stated, is that people go to "MLK holiday sales held by stores that profile shoppers." Rev. Sharpton pointed to the economic inequity on Manhattan, one strip of an island whose southern-most tip houses Wall Street, and at whose northern most tip sit public housing projects, and where the quality of public education varies greatly by zip code. He mentioned the arrogance of "stopping people based on the color of their skin, but letting go others who rob us of billions; of those who we pay to protect us, hurt us; and those we elect think they are doing us a favor to hear our grievances."

To illuminate the legacy of Dr. King, Rev. Sharpton drew on the story of "the dreamer Prophet Joseph," whom "God blessed to see what was not there and made his dream a reality." He spoke about how Joseph and Dr. King were both targets of "envy, discomfort and jealousy" from their own brothers. Yet, neither lost their faith in spite of being thrown into their respective "pits." He urged people to avoid "getting caught up in how long we live rather than and how good we live, and to keep faithful to the dream that God gives you." "Do not succumb to bitterness, even when those you are fighting on behalf of turn against you," he said, "because God uses the pettiness of men to raise the greatness of the age." "You cannot honor Dr. King without seeing the dream God put in you. We need dreamers. God gave each of us some unique, talent and gift. God does not make a mistake... refuse to stop dreaming!"

In bringing together predominantly African American Catholics with Muslims, this celebration of Dr. King's legacy of non-violence makes a unique contribution to interfaith work in New York City and beyond. Clearly, there are real differences in doctrine across religions, even within each tradition. And where there may be no doctrinal differences, there are differences in class, gender, race, immigrant status, and more. The latter is true for African American Catholics and Muslims, whose history and experiences mark them as distinct within their respective faith communities. Interfaith work has mostly missed this latter difference, since one commonality often stressed is the similarity of Catholic and Muslim immigrant experience. Irish and Italian Catholics, like Muslim immigrants today, shared the same struggle of discrimination, otherness, and integration. In telling this story, however, we ignore that African American Catholics and their Muslim counterparts have had a different experience- what they share in common is a history of enslavement and racial injustice based on the color of their skin.

Bringing together religiously diverse African Americans, the service creatively and powerfully harnesses the common cause of many religions: self-liberation and justice for those who are oppressed. Through it, the Central Harlem Catholic Vicariate and its Christian and Muslim partners have newly aligned themselves with the path that Dr. King lay for all dreamers.