Dave Boone was always funny. "Many years ago, just days before my grandmother passed away, she told me that she'd ask for me whenever she was feeling down," says Boone. "She said, 'just let David talk, he's bound to say something funny." And he was also very creative. "I'm an only child, so I was always good at make-believe and inventing characters and stories to amuse myself," he shares. His father had a collection of radio shows from the 1940s. So from an early age he was exposed to Jack Benny, Charlie McCarthy, Bob Hope, even The Lone Ranger.

Not only was Boone influenced by the storytelling, he was also obsessed with sound effects. "I'd sit in the den with my tape recorder and make up my own radio skits with jokes and sound effects," explains the Norwalk, Connecticut native. "When I found out that I could also amuse my friends and family, I tried to do so as often as I could." He fell in love with theater when his parents took him to to productions at the Westport Country Playhouse. "They also let me watch TV and, mostly, inspired me to dream. They still do," says Boone.

While he was student at Sacred Heart University in Connecticut he met Jay Leno at a comedy club. After graduating and moving to Los Angeles he ran into Leno again at the Improv. At the time, Leno was Johnny Carson's official guest host. "I let him know that I was trying to become a comedy writer and he handed me his fax number. This is in the days before email," Boone explains. The very next day Boone began submitting Leno monologue jokes. "It got to the point where I was selling jokes on a regular basis and they'd call me when Jay had to fill in for Johnny at the last minute," says Boone who also wrote for his friend Kevin Nealon when he was the Weekend Update anchor on Saturday Night Live.

Those jobs and lots of hard work led to other late night shows including Later, with Greg Kinnear. A week after he was hired, Kinnear left to make As Good As It Gets. A year later, the actor was nominated for an Academy Award. And Boone was writing for Oscar host, Billy Crystal. "Writing for Billy opened a lot of doors for me. And if I'm ever in doubt, I ask "what would Billy do?," says Boone. "It's easy for writers to fall in love with their own jokes, even if they're out of place. If a joke leans toward the mean side or the "funny in the writers' room" side, having Billy's voice in my head gives me the confidence to kill it and look for something else."

His connection with Crystal had him writing for Comic Relief 8 at Radio City with Whoopi Goldberg and the Robin Williams. "The last time I worked with Robin, I wrote with him for his tribute to Jonathan Winters on the Emmys," says Boone who has written for 10 Academy Award shows.

Boone spent four "very happy years" with Goldberg on Hollywood Squares, followed by two years as Head Writer when Bruce Vilanch left the show. He also worked on Dancing with the Stars with host Tom Bergeron for a decade. "We met on Hollywood Squares and have been inseparable for 17 years," explains Boone. "I love the live aspect of Dancing With the Stars and I love going to work where there's a live band and gorgeous dancers. It beats working in an office."

Boone returned to Tony Awards in his 13th consecutive year as the show's Head Writer. It's a job that deeply resonates with his love for theater. "I get to infuse the Tonys with thoughts of my own about what theater means to me," says Boone who has won 2 Emmys and a Writers Guild Award writing the show. "I'll often write something from the heart and tell the talent, 'that's my truth, if it's not your truth, I don't want you to feel obliged to say it.' Most, if not all, have the similar feelings toward the art form and don't disagree with the words."

NewYork.com talked to Boone about the joys and surprises of writing for the Tony Awards. Click here to read the full story. 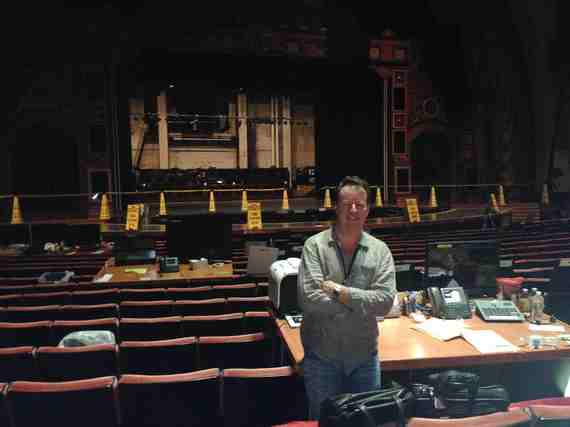