As Islamic State fighters advanced on her village two years ago, Alima decided it was time to leave. Pausing only to grab her identity papers, she fled along with her family and neighbors. She had lived in her home, near Mosul in northern Iraq, since 1944.

When Iraqi forces recently pushed Islamic State fighters out of her village, Alima went back. But when she entered her house, she found it ransacked and occupied by soldiers, who told her to go. "It is hard to live 70 years in a place and then someone says 'this place does not belong to you anymore,'" she says.

Alima is one of 3.4 million Iraqis who have been chased out of their homes since the start of 2014. Thousands more are at risk now the military operation to retake the city of Mosul has begun. Families often leave with little more than what they can carry, expecting to return in a few days or weeks. But wars can stretch on for years, and once they end there is often little left but rubble.

For the world's 40.8 million internally displaced, like Alima, made homeless within their country's borders by war and persecution, the average period of displacement is 23 years. Many never manage to return home.

The media often reports on the issue from temporary camps, against a backdrop of makeshift tents and soup kitchens. But most refugees and internally displaced people don't live in refugee camps. They tend to live in urban areas; the towns and cities of middle-income countries like Jordan, Turkey and Kenya, which border warzones.

The root cause of today's unprecedented crisis -- the number of people forcibly displaced from their homes is at its highest level today than since the end of the Second World War -- is conflict. And many of these conflicts, raging in places such as Syria, Somalia and Libya, appear intractable, at least in the short term.

Although it may not be possible to bring an end to such wars, there are practical measures that can be implemented to help people, like Alima, who have been forced from their homes.

The International Rescue Committee (IRC), which has been responding to the world's worst humanitarian crises since 1933 and currently operates in 40 countries, finds that one of the most effective ways to help those displaced by violence and conflict get back on their feet is cash relief.

Cash relief is similar to relief goods like food or blankets, except provided in the form of money so refugees can purchase the things they need most urgently. Funds are often transferred onto a debit card or paid out by a bank, allowing refugees the freedom to decide what to spend the money on.

Overwhelming evidence shows that emergency cash relief transfers can reach people in need faster and at lower cost than other forms of emergency assistance, such as food or clothing. 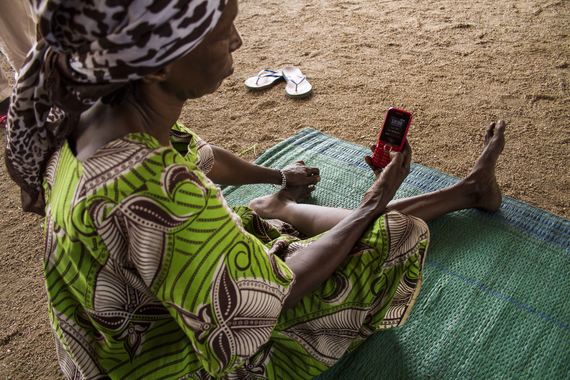 What is more, when people have the power to make choices for themselves, they have improved health, their children receive a better education, they are safer, and they are better able to focus on their long-term wellbeing. Cash relief also affords people dignity and respect, allowing them to make their own choices about their lives.

Alima's family first received a one-off payment of $360 in emergency cash from the IRC. The initial amount was followed by $270 for two more months to help the family settle. Alima and her daughter, Sara, collected the funds from local money transfer agents. The IRC provides emergency cash relief without conditions on how or where recipients spend it, which means that households can use the money on whatever they need most.

Alima used IRC cash relief to repair the electricity in the house in which she and her family now live, in a part of Northern Iraq free from the Islamic State. The money also helped pay for members of her family to visit a doctor.

A 2014 IRC study of cash transfers to 87,700 refugees in Lebanon found that cash relief enabled households to meet the needs they prioritized most, reduced negative coping strategies such as child labor and improved access to schooling for children. Additionally, each dollar of cash assistance spent by beneficiaries generated $2.13 of GDP for the Lebanese economy. Researchers found no evidence beneficiaries wasted their cash on vices.

Cash relief isn't a panacea for the world's refugee crisis. In war zones, traditional forms of emergency aid continue to play a crucial role in helping fleeing civilians. But cash relief is one of the best ways to help the millions of long-term refugees and internally displaced people with few prospects of returning home. It also helps them to integrate into their new communities, and supports the economies of host countries.

Over the next five years, the IRC is committed to delivering 25% of its humanitarian assistance through cash relief, up from 6% in 2015. The IRC also plans to have active cash transfer programs in 75% of its country offices.

For millions of people like Alima, who have been forced out of their homes through no fault of their own, cash relief won't bring their old lives back. But it is one of the most effective and efficient ways to help them get back on their feet, and regain control of their lives.