As you look at the opening of the Keleti Metro Station, in the center of Budapest, an impressive sight awaits you. The expansive and newly-renovated underground passage in front of the old Austro-Hungarian train station is one of the so-called "transit zones" in which thousands of migrants and refugees camp for hours and, sometimes, days as they follow a route through the Western Balkans across Greece, Macedonia and Serbia. Several hundred people arrived last Saturday, mostly families with children, some only weeks old, along with many groups of young men.

The precarious conditions, however, do not make for an entirely joyous atmosphere. All of the people camped there only have access to a single water fountain and very few portable restrooms. Simple mats on the floor serve as beds, and the hasty distribution of food has provoked physical conflict. However, kids playing ball, people resting, and the scent of recently washed clothing tend to lighten up the tense environment, allowing everyone to breathe a bit easier. As such, the volunteers at the camp emphasize this "peaceful, humble and positive" attitude that the majority of 'campers' exhibit. Still, the relative peace of the locale cannot hide the harsh reality of what it took to arrive in Budapest, a trip that can take between three weeks and six months. Holding onto a column, a crying young man is consoled by fellow migrants as he apparently receives some bad news. Slightly further away, a young man stretches out on the ground next to a pair of crutches and airs out a long, fresh wound on his leg. 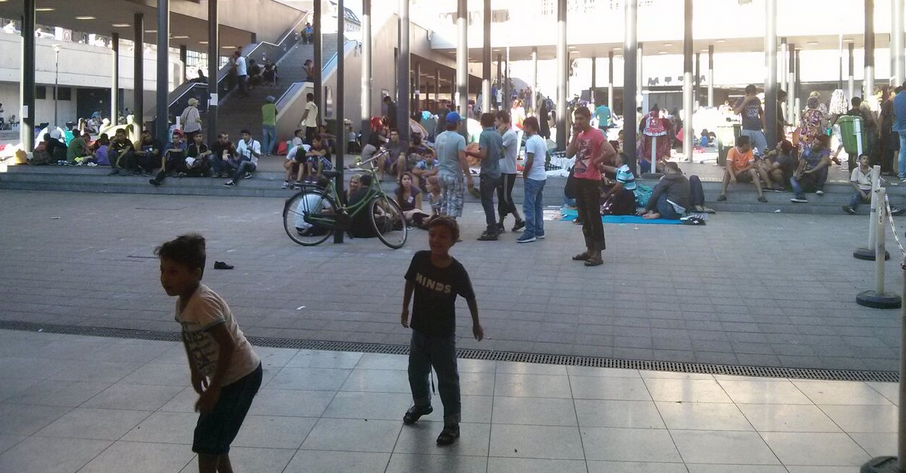 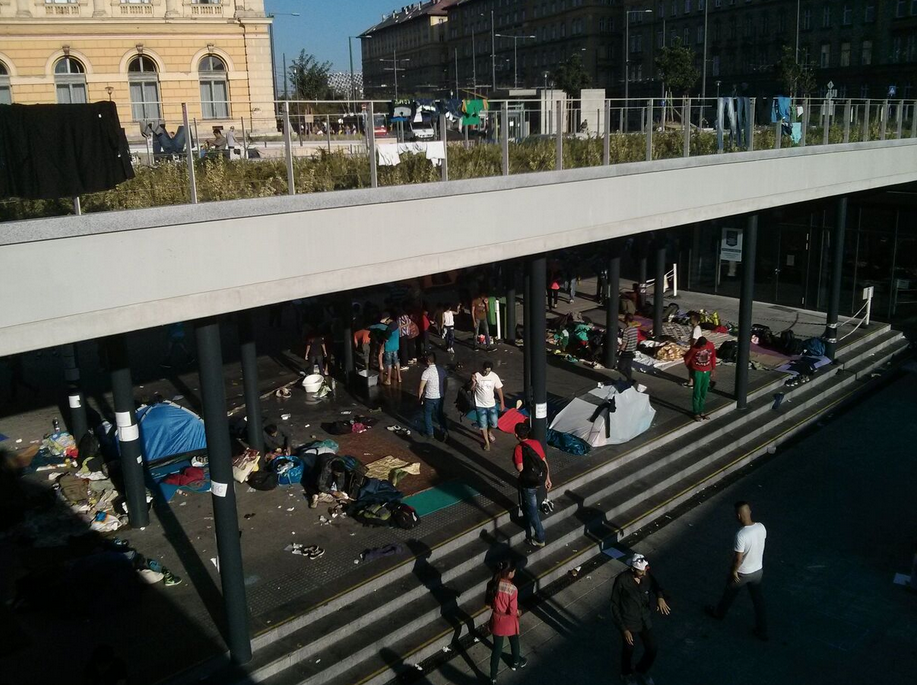 Keleti is one of the Hungarian Administration's officially designated "transit zones" in Budapest's main train stations. Even though international lines are forbidden, many refugees continuously circle the interior of the country via train with very little obstacles, using the stations as rest stops and meeting points. Many cross Serbia's border on foot and jump the demonstrably ineffective barbed-wire fence -- on which Hungary's Prime Minister, Viktor Orbán, wasted the equivalent of 11 years of the State's budget -- which has the goal of showing his voters the government's tough stance on foreign intruders. The Hungarian government's not-so-subtle perspective on this issue has been reinforced by their creation of refugee camps in various sites around the country, the use of public dollars to post messages like "We don't want illegal immigrants" and the constant threat to send their army to the country's southern border.

Even as the Hungarian government's role in this crisis oscillates between inaction and aggression, the supportive reaction of Hungary's civilian population deserves recognition, especially in a country not typically prone to public protest or demonstration. Without the work of volunteers and the bountiful donations of food, clothing, shoes and personal hygiene items, the situation at camps like Keleti would probably be unbearable. One volunteer from Szeged, who works as a researcher at the University there, recounts how the first support groups formed spontaneously last May in her city located only a few kilometers from the Serbian border. Made up of university professors and students as well as some housewives and unemployed or retired folks, the group in Szeged has received threats and attempted attacks such as the one perpetrated on June 28th by the 50 to 70 members of the ultra-right organization Betyásereg, that required police intervention. This past Monday the volunteer group prepared almost 1,000 sandwiches, just among five volunteers.

The thousands of Hungarian volunteers and anonymous donors aren't simply acting out of generosity and solidarity, but are also sending a clear message to their government and fellow citizens.

In Budapest, the work in the "transit zones" is channeled through organizations like Migration Aid and MIGSZOL, which either didn't exist or were extremely small-scale before the refugee crisis. They organize speedy, informative courses such as the one held on August 29th in the Nyugati station. Some 20-odd volunteers, mostly Hungarian women, along with a few foreign residents in Budapest, received recommendations on how to help the refugees with their trip and tips to avoid being accused of collaborating in human trafficking by the Hungarian authorities. The instructions are to direct refugees to the camps constructed by the government and advise not to lend your phone, transport or house the refugees at your own property. Given that the great majority of the refugees want to continue their journey towards Germany and other northern European countries, the groups recommend that they cross by foot into Austria and try not to be apprehended by or registered with police. Their objective is to avoid being returned to Hungary later through the rules of the Dublin Regulation, which, above all, affect the countries on the southern border of the Schengen zone such as Hungary, Greece and Italy, since these rules force asylum seekers to stay in the first country in which they arrive. Still, with all this help, confusion remains widespread, especially since Hungarian authorities allowed several "special trains" to leave this past Monday, taking some refugees from Budapest directly to Germany.

Meli and Lucía, two Spanish volunteers from the group at the Nyugati station, are both residents of Hungary's capital. After attending the information session, Meli welcomed a group of young Afghan men who recently arrived from the southern part of Hungary. One of them, only 13-years-old, recounted that in his three-week journey they had flown from Afghanistan to Iran and crossed the Turkish border on foot across "some very tall mountains" where they saw "an older man who was sick" die. They traveled without their families, though they carried a bit of money. As the boys were searching for a place to eat dinner, they decided to add Meli on Facebook. In fact, Meli highlights how "familiar they are with social networks... They connect to open wifis, see videos on YouTube of refugee camps like Debrecen that they do not want to go to, stay in touch with family via Viber and plan travel routes with Google Maps." These technologies are "very important for the re-unification of relatives, friends and traveling companions when they lose each other." Lucía, similarly, has spent several consecutive days organizing activities for children, like drawing contests, and working to distribute food, prioritizing children and the recently arrived. Their work is not limited to these transit zones, however. Last Monday night, the two Spanish women intervened after suspecting that a group of refugees had conned them out of 200 euros in one of the streets near the Nyugati station.

The citizen movement that has emerged through these support organizations for the refugees must be acknowledged, keeping the country's internal politics in mind. The thousands of Hungarian volunteers and anonymous donors aren't simply acting out of generosity and solidarity; they are also sending a clear message to their government and fellow citizens. Thanks to their work, Hungary isn't simply defined as one of the more criticized member states of the E.U. for flat-out ignoring or actively impeding the travel of migrants, but is also now known for spontaneous solidarity and humanitarian efforts during what is considered the biggest crisis in Europe since the Second World War.

____________________ Sergio Tirado was a Doctoral Researcher at the University of Central Europe, in Budapest, where he resided between 2008 and 2013. This blog recounts his impressions of his last trip to Hungary in August of 2015 and includes the testimonials of Spanish and Hungarian volunteers that collaborated in helping refugees at the train stations in Budapest and Szeged.